Goatboy the every evil member of the Bell of Lost Souls. I do arts, play 40k, and even paint a lot of stuff. Oh I guess I write articles here for like - a long time (12 years... maybe... wow). Anyway - that's me! Look at my Instagram to see what I am working on - or working on for someone. I am always doing something Hobby related.

I am sure most of you have seen the upcoming IG codex, or have at least read and digested the Imperial Guard codex rumors. So we all are seeing all the new goodies and the newest army to breathe in codex creep. Today, I’ve decided to chat a bit about how I am not going […]

As everyone should know, the Flylords went up to cold Chicago to fight it out at Adepticon 2009. Fun was had by all, and as BigRed has posted, we came back with some goodies. I want to give a big shout out to everyone I met. I always enjoy chatting it up and seeing how […]

40k HOBBY: Painting stuff I am working on 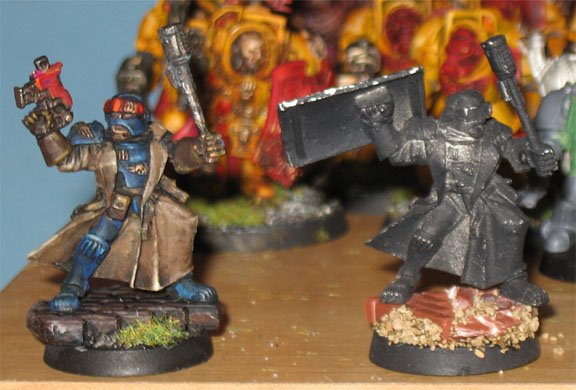 Most likely these things will get done next week, after Adepticon, but here is a small post on what I am painting. These are the first two Arbites from a small commission I am doing. He wanted to go with a darker looking style, and I seem to be fit for that haha. I am […]

I started on this topic a bit last week, and wanted to delve into it more this week, right before I head up to Chicago to throw down at Adepticon. We all know what a rules lawyer is. What I want to do is go into the different aspects of rules lawyers as well as […]

Goatboy here, and let me start by saying I was wrong. The trick with Chaos Dreadnoughts I was talking about does not work, according to the nice people at GW who wrote the books. Dreadnoughts, like every other model in 40K, can see 360 degrees around themselves, and only worry about Arc of Sight for […]

Hi, Goatboy here. Between Jwolf, and myself, we have a lot of 40k tournament experience with lots of different armies. I prefer the go to your throat style list, while Jwolf likes a much more, shootie army. We might have two different play styles, but we plan our armies in the same way. We look […]

If you are a competitive Warhammer 40k player, you all know how annoying Nob Bikerz can be. They are an extremely hard hammer unit that can win the entire game for a player. They are a unit with such destructive capabilities that an unprepared opponent will not know what hits them when the biker gang […]

Goatboy 40k Thoughts: Are we Having Fun?

Hi there again. I played some Warhammer Fantasy this weekend, in the first “Heavy” tournament of the season here in Austin. I brought a tweaked Warriors of Chaos list with a Nurgle theme running through it. It is the same list I plan on throwing out at the Lone Wolf tournament this coming weekend. I […]

It is 5th Edition – Evolve Your Army. Last week I talked about metagame and what it is in reference to Warhammer 40k. 5th edition changed the game up, and lately I have seen too many 4th edition armies coming to the table. I want to go over some ways you can change up your […]

I was going to put together a painting article this week, but I didn’t get the camera I wanted to use to take step by step pics. Those interested in speed painting info will have to wait a week or so. But I swear it is coming. I also changed up my personal blog to […]

Today’s thought is about not giving up. The biggest bit of advice, that in a lot of ways can pull you out of a bad situation in a game, is to never give up. I know we have all had those games, where everything you do to an opponent is ignored. When you are playing […]

Hi, Goatboy here. We’ve had a nice week of editorials haven’t we? This last week was a bit of a break from my normal walkthrough of a Warhammer tournament player’s handbook of tricks and went into some of the reasons why I enjoy this game. Yes, even though I bring a tough game, I still […]