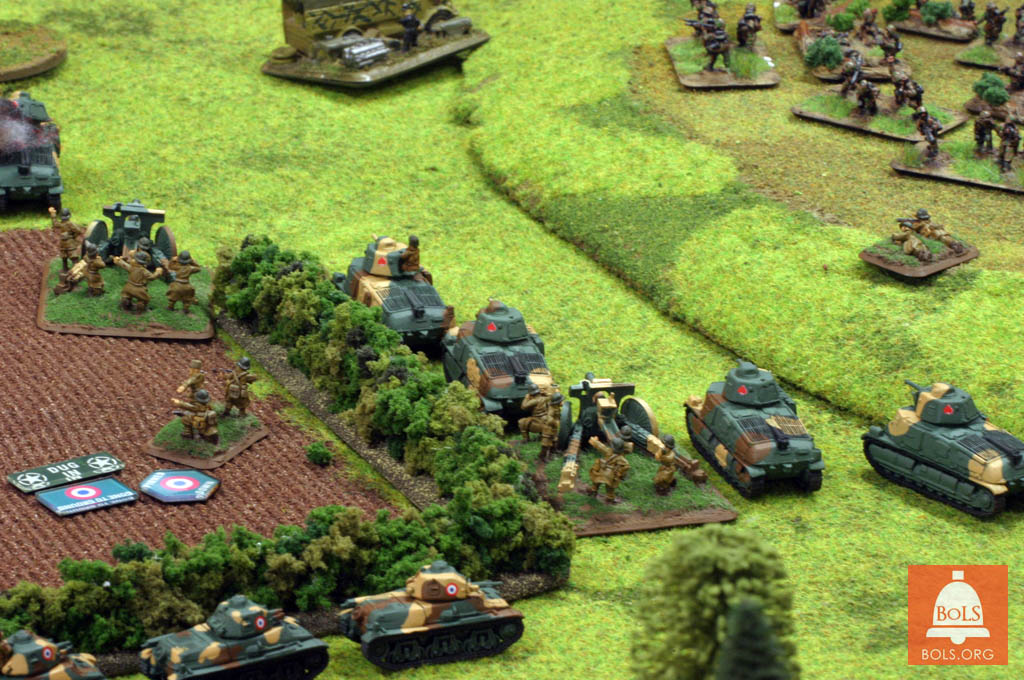 The French are attacking!Caption contest -GO! Enjoy. If you have an awesome wargames shot you think would make a great BoLS pic of the day, email us. We love spectacle and characterful shots so lets see what you budding photographers can do! Warhammer 40,000, Fantasy, Warmachine/Hordes, DUST & Flames of War miniatures photos are welcome.

Tom and I got a game in tonight, allowing me to get my Panzer IIs on the board having just recently completed them! Tom was also anxious to try out the French, and went with an Escadron De Combat loading up on SOMUAs. I knew it’d be a hard fight my boys were in for! […]

My friend and I got an Early War game in tonight. I still don’t quite have enough stuff to make a legal 1750 Infantry list for my French, so ran with tanks tonight. Brian ran with his Czech Panzers as well, but tried to squeeze in some of his recently painted stuff. The mission is […]

Frost here again to breakdown how I painted my French Infantry. If you are painting FoW infantry of any kind, I think you may get something out of this as well.

My friend Brian came over for a game, and I decided to give my French Panhard list another shot. He ran his German 38(t) list. We decided to try the new unofficial mission from the I-95 gamers: Blitzkrieg Domination. You can download it here. I encourage all you experienced FOWarriors to give it a shot […]

Welcome to the house of Frost. As my premier article for BoLS I have the pleasure of reviewing for you the contents of the new early war French Infantry Company army box (FRAB02), a.k.a. Compagnie de Fusiliers-Voltigeurs.

Compagnie De Combat French armor is an interesting beast in Flames of War.  At the time of the blitzkrieg, French tanks had better armor and armament than their German counterparts, but suffered from many flaws- both strategic and design related.  The major drawback plaguing most of the french tanks was a small, one-man turret.  This […]