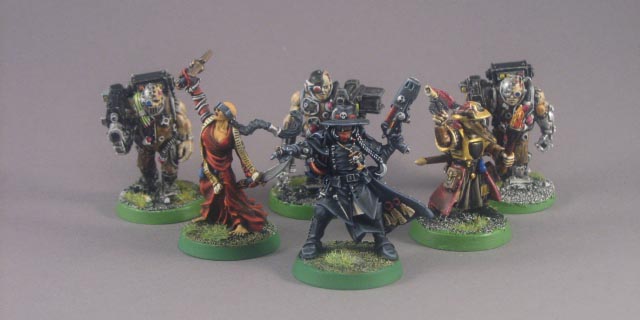 As promised, I’m going to discuss taking wounds on an Inquisitorial Retinue. Just like building a retinue, there is an art to taking casualties. I find that if you do it right, you’ll preserve the firepower and Victory Points of the unit through a tough, six-turn game.
The rules you’re going to want to reference are:

I’ve talked a bit about Mixed Armour, but it’s worth covering again. To get build a quality Inquisitorial Retinue you must understand the Mixed Armour rules. Read them and, if you think you’ve read them, re-read them.

I also recommend taking a look at the Creatures with More than One Wound section because many players get confused when you take a wound on a multi-wound creature. The section says that if you have multiple creatures with more than one wound, you must take whole models. This doesn’t apply when you only have one creature with multiple wounds in a unit.

For the rest of the discussion, I’m going to use a Retinue similar to the one we built in the previous article. The unit looks like this: Inquisitor Lord (W3, 4+Sv), 3 Acolytes (4+Sv), 3 Heavy Bolter Servitors (4+Sv), and 2 Chirurgeons (6+Sv).

Let’s talk quickly about deployment. You’ll want to put this unit into the hardest cover in your deployment area. It’s relatively easy to find 4+ area terrain with the new rules so I usually stick them there. I tend to deploy my Retinue so that every model is in cover and all of them are viable targets. Most importantly, I want my Inquisitor to be a valid target so that I can assign wounding hits to him.

We’ll step through each wound and, at the end of each section, you will see a figure like this: (7-2). The first number indicates the remaining models with 4+ save and the second indicates models in 6+ armor. The bold, underlined number indicates majority armor type.

Wound 0: Put the first wound each phase on your Inquisitor so that it can be absorbed by your Chirurgeons. Remember you can only do this once per shooting phase. (7-2)

Wound 1: This is your first unabsorbed wound and you have a decision to make (and where the art comes in). Against an opponent with lots of shooting, I will take the first wound on my Lord to discourage him (by this time he’s fired two units at my Retinue without making a dent).

Against an opponent with very little long-range shooting, I may take a wound on an Acolyte to preserve Victory Points (wounding the Inquisitor Lord gives up half of his VPs). Both are fine options. In this example, we’ll put a wound on our Lord. (7-2)

Wound 2: This is your second unabsorbed wound. Since you have already given up VPs for your Lord, there’s no reason not to put a second wound on him. At this point, an opponent unfamiliar with Inquisitors may give up shooting at the retinue all together and move on to a softer target. (7-2)

Wound 6: Time for another decision; now you must decide between taking a Heavy Bolter Servitor or your Inquisitor Lord as a casualty. If you are using Battle Sisters with their wonderful Books of St Lucius for Leadership, you may consider taking the Inquisitor Lord as a casualty. On the other hand, the Chirurgeons will stop working and you may be giving the wound per turn they absorb. Decisions, decisions.

Against an army with lots of long-range shooting, I usually pull the Lord to preserve my firepower. I’ll have already used the Chirurgeons and Torrent of Fire will pick off my Servitors in following rounds, so I’ll take every shot I can get. Against an army with few limited long-range shooting, I will pull a Servitor to keep the Chirurgeons in play because he’s unlikely to cause more wounds than I can absorb.

Wound 7: Heavy Bolter Servitor. This is the first wound that reduces the firepower of the unit. If you assume the Chirurgeons have soaked 3-4 wounds, then this unit has absorbed 10-11 unsaved wounds before losing a single long-range shot. That’s very impressive for a unit with 4+ majority armor.

The unit also loses scoring unit status at this point. Not too shabby. (2-2)

As you can see, the unit is very durable (especially when you factor in the 4+ cover save). Most opponents will take a few shots at the unit and decide it’s not worth trying to eliminate. If you can provoke that response, you’ve mastered the art of taking casualties from an Inquisisitorial Retinue.

Next time: All About Assassins…