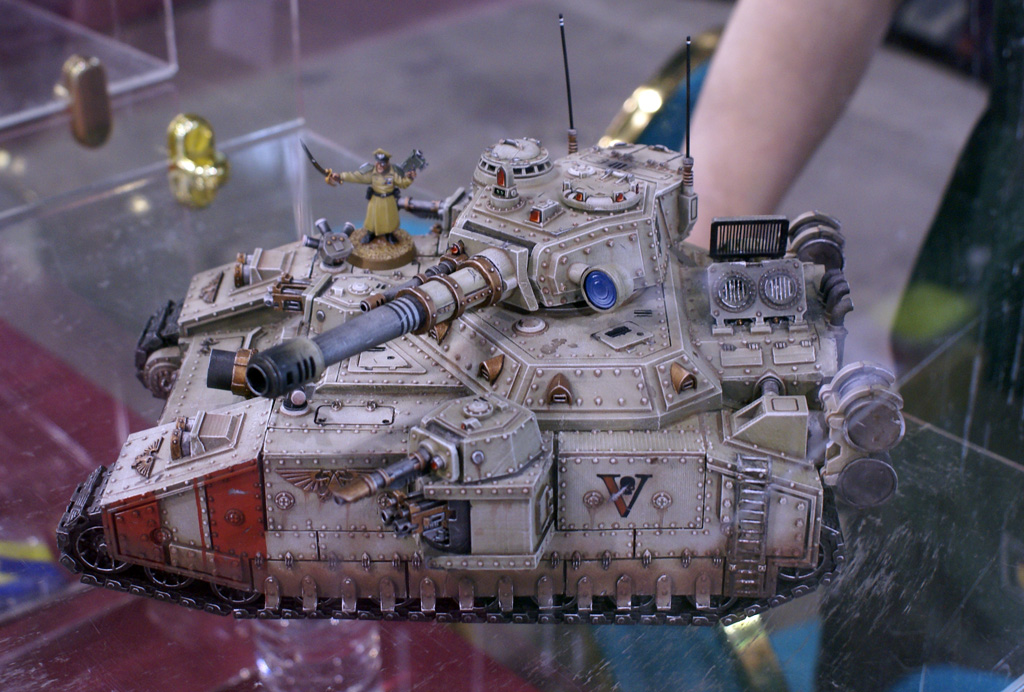 I’m going to post some of the pictures I took from the GT tonight and then post an update later on how everything went. I had been warned about how unreal Games Days were, but I didn’t believe it. I’d been to some large tournaments before (a couple of Adepticons and the Lone Star GTs in Texas), but I had never made it to an official “Games Day”. I was completely unprepared for the bedlam that happens when they open the doors to the public on Saturday. If you’ve been, you know what I’m talking about. If you haven’t, you won’t believe me. But it was very cool.
The highlights for me were the tournament and the cool people I met. I’ll give you a run down on my opponents and their armies when I cover my games, but I didn’t have a single bad game. Not one.
The theme of the show was Apocalypse (to the point where they wouldn’t address Chaos questions at all). But it was nice seeing the plastic Baneblade and the various conversions (and the cool new templates). I know that you’ve probably seen pictures like these on Warseer, but a few of mine ended up being pretty clear so I thought I’d put them up for your viewing pleasure.
The sheer number of people that attended was surprising — there were thousands. It makes me wonder why the tournaments aren’t larger. How many people tried to get into the tournament after it was sold out? Clearly not thousands. Maybe it’s an indication that most players are new to the hobby or they don’t have a large enough (or complete enough) army to play in tournaments. Or maybe there aren’t as many “hardcore” gamers as I thought.
There were tons of kids (and some parents trying to be supportive of their kid’s choice of hobbies while wishing they were at football or cheerleading camp, lol), but lots of adults players too. Besides the massive merchant area (Forgeworld, Black Library, and Games Workshop), there was a lot of stuff to do and everyone seemed to be having fun.
If you haven’t been, you should definitely go. Well, take a look a the pictures and let me know what you think.