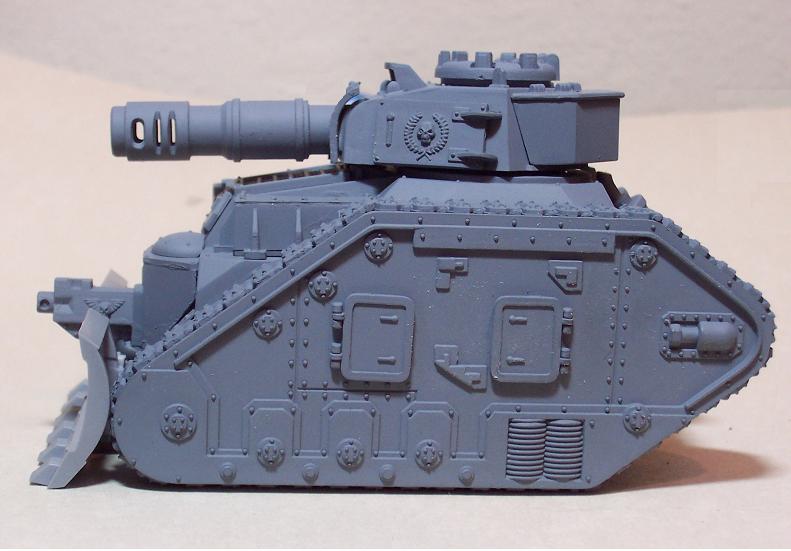 Is this a new Russ pattern? Has Forgeworld come out with yet another Russ variant? No, not really. This is just a simple mod that can make your Russ look unique. The more astute reader has already guessed that this is simply a Russ with its hull reversed. The modification is pretty easy and takes less than an hour to do. I first started out with an ordinary Leman Russ. I assembled the main hull and track sections. Next, I added a slanting piece to what is to become the front of the tank. The rear section of the hull weapon mount was removed to make it vertical. The top hatch had to be trimmed to match. Both the weapon mount and the driver’s view were then glued to the new front piece.

On the rear, we need to cover up the gap left by the hull weapon. I had to trim and file the ridges to make it flat. Because the exhaust will fit over this piece, I didn’t add much detail to it; a simple plasticard square will do. I also covered up the hole left by the drivers view slit. I put a cover over the storage area and added another view slit to the front (taken from the landspeeder model). Every thing else is just standard Russ parts.

With the rumors of a traitor guard list coming out, I’d love to make a whole army of these, but for now I think it will get looted by the orks.

UPDATE:
On BigRed’s advice, I added a dozer blade to the front. Because the heavy bolter is mounted low, I had to cut out the blade, Vindicator style. It turned out better than I thought it would.