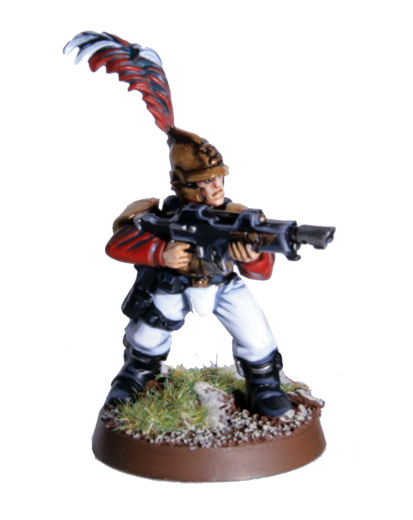 OK, guys lets take a break from all the rumors for a bit of BoLS community building. This challenge goes out to all the intrepid modelers and 40k fluff nuts out there. Today I introduce the: Macharian Crusade IG Regiment Challenge!

Your goal is to submit to the BoLS email box (upper right column) the following:

After a week or so, we will post the top finalists BoLS receives and put up a poll for you, our dedicated readers to judge. The top 3 finalists will get added into the Macharian Crusade book for all to see and try to match world over (along with a special thanks credit for the 3 proud creators).

Here is an example to get your creative juices going… Chiros Red Guard
Once one of the most decorated regiments of the Segmentum Solar, the famed “Red Guard” were the personal army of General Richeleau of Larka. One of the most pious and determined of forces, they choose the wrong side in one of the Ministorum’ s many Wars of Faith. Hounded out of the Imperium they fled into the wilderness space of the Segmentum Pacificus. They were discovered on the rebel world of Chiros by the Macharian Crusade’s 2nd Army under General Sejanus. Beaten, but never broken, the Chiros Red Guard fought to the end, extracting a high price in blood in exchange for their lives.

~Ladies and Gentlemen, start your engines! Its only one IG trooper to convert up and paint and a tiny bit of fluff. Lets see your best stuff folks. As usual, comments are welcome, so let us know if you’re in, what you’re working on, and how its coming. If you want more context for the Macharian fluff, feel free to use this Crusade Map to help you out. Happy modeling and good luck to you all!