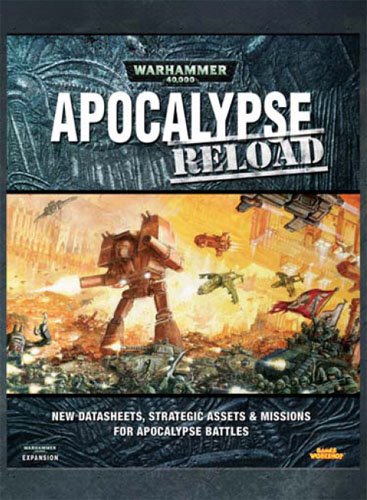 Rumors brought to the community by 40konline’s Chosen Man

Hi guys, we have some more rumors on Apocalypse:Reload. According to the original poster, he got this info from flippping through the book at the Baltimore Battle Bunker. Here they are in their unaltered form.

Steel Fury Company: Basically just like the one online 3+ Baneblades in the formation. Check the PDF online if you want to see it.

Baneblade Troop Transport Variant: I believe its called a Banestorm(Something like that). Basically its a 40 model transport(Note that I said model….not specific to any kind of IG unit….Keep that in mind for what you want to cram into it). It comes with a Vulcan Megabolter. The drawing in the book has the Vulcan Turret mounted in the forward spot of the baneblade, with the TL Heavy Bolter. The troops in the rear, so your looking at a Superheavy Chimera profile. The troops inside can have 20 models shooting out of the tank! On top of that, if the tank doesn’t move all power can be diverted to the weapons allowing the Megabolter to fire again.

Castillans Command Formation: Its the Cadian Special Character with his own High Command/Honor Guard Formation. He has his own personal High Command squad with several characters like HSO, Psykers, Commissars, Vets, Techie, and so on. On top of that you also get 3 other Command Squads that are part of the formation. This formation gives you 4 Stratagems I believe.

IG Armored Fist Company: This one is broken down in the same way as the Armored Tank Companies, where you can take 3 AF Squads to make a AF Squadron formation….OR you can up it to 3 Squadrons+1 Command AF Squad, to make a company.

IG Hellhound formation: This is exactly as you might think, 3 hellhounds with one chosen as a command hound. The formation allows you to combine all 3 templates on one target….TOASTY!

IG Catachan Formation: For those of you who want to bring a flavor of the catachan DWV, here is your formation. This is 3 Hardend Vet Squads+at least 2 SWSs formation. This is an attempt to bring the DWVs into Apocalypse. You get rules for Ambush and Booby Traps, as well as several special rules for moving thru cover to allow for that Jungle Feel to the army.

Strategic Assets:
In this book each race get their very own set of assets and stratagems. There are some universal ones, but the mood of the book is set to help specific armies. Even the Sisters of Battle have their own stratagem(Holy Crusade I think, like in DoW Soulstorm). The IG get 4 assets for them, which some of the new formations are allowed to use. Right now I can only remember 3 of the 4.

Defensive Line: Basically you get a shield dropped in front of your IG forces. If I remember right you get a +3 or +4 cover save, similar to the blind barrage.

Fortifications: This asset gives you basically 3 Bunkers at AV 14 in your deployment zone.

Fix On My Coordinates!: This has got to be one of the funest one of all. Basically you pick any squad with a Vox Caster. You make a leadership role and if you pass an Orbital Bombardment will drop Exactly right on top of that Vox Model. Heh! I’m not exactly sure, but I believe this asset can be played at any time…

~Standard caveat emptor’s apply but I’m intrigued by the baneblade superheavy transport. If it does what the man says it does, it better be a lot more expensive than a Gorgon, because it sounds superior in every way. As for the Strategic Assets, Fix on my coordinates sounds like a blast! Apocalypse:Reload is supposed to be a great deal for the cost if you’re into Apocalypse (like me).