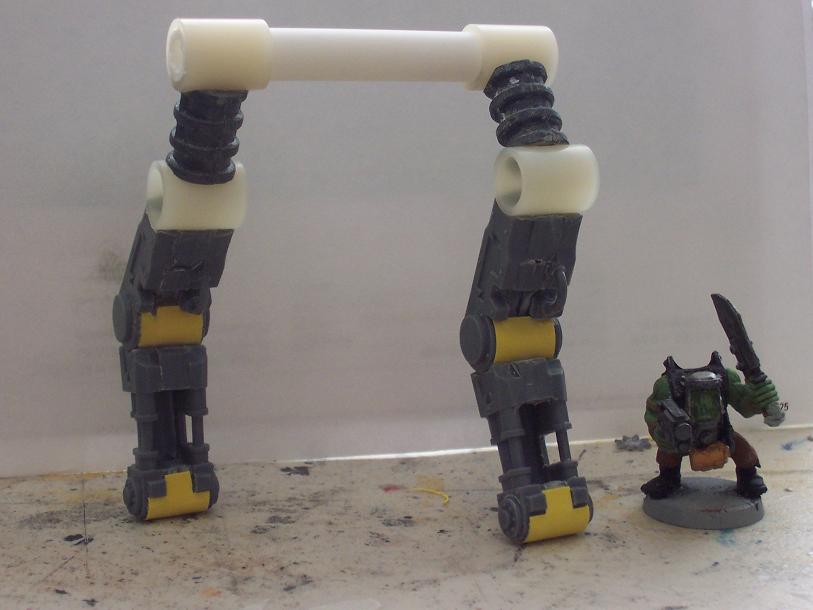 The hardest part, for me, in scratch-building a titan is the legs. It is difficult to get a pair of legs that look beefy enough to hold up all that metal, but still mechanical enough to move it around the battlefield. So, when I saw Xanthos’ knight titan on DakkaDakka used modified defiler legs, I was amazed. He came up with a very simple concept and produced amazing results.
The basic idea is to take defiler legs, then insert a bit a plastic between the two halves to make them wider. Brilliant! I immediately headed to ebay to pick up the defiler leg sprue.
It really is as simple as it seems. Cut the leg at the joint (to make the leg straighter) then put some plastic between the left and right halves. I used sprue to expand the two halves. It gave perfectly straight lines and I didn’t have to worry about making sure the space between both leg parts were uniform. The top half of the model will be based on forgeworld’s warhound, rather than the ancient epic scale knight paladin. It’s a personal preference; I just like the boxy look better than the rounded one.
The head should be the focus of the model. To reinforce the Knight look, it will resemble a knight’s helm. For more info on the Knight Paladin titan, check out the Lords of Battle pdf.
I’ll post more updates as the project unfolds.
Everything is coming together well except for the titan CCW. Any suggestions on what it should look like? chainsword? buzz-saw? frying pan of doom?