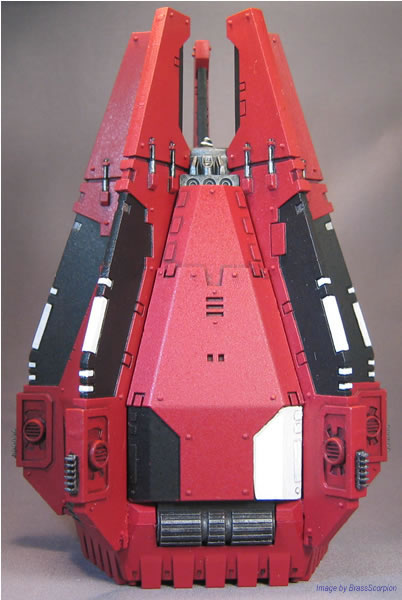 Now that the Drop Pod model has been in the hands of customers for a few weeks there are lots of these kits around in various stages of construction and painting. One thing I learned early on in building my first Drop Pod was that this model is a lot more intricate than many other GW vehicle kits and there are a few tricky bits that are not that well-covered in the instructions that come in the box. This article will briefly describe some of the tips and tricks I’ve found that make assembling and painting the Drop Pod easier and less prone to error. ‘ere we go!

There are three common errors I’ve seen repeatedly on this model. One concerns the assembly of the interior passenger harnesses, another the gun turret, and the third relates to the doors. Let’s take them in turn.

First, the harnesses are often problematic because it is not obvious that one of the ten of them is unique. The unique harness has a skull on it and round pins rather than square ones for gluing. The round pins fit only into one side of one part that otherwise looks identical to four other pieces. Test fitting these bits before assembly will ensure that the proper harness is paired with the proper piece to which it attaches. Related to this issue is the interior pedestal around which the harnesses are attached. Again, all of the pieces are nearly identical, but not quite. One and only of the upright pieces on the pedestal has a keypad. The harness with the skull on it is supposed to face the keypad section of the pedestal. An inset photo in the Drop Pod instructions attempts to make this clear, but from my own experience building this model and from looking at those built by other people, it’s not all that clear. Click the photo below for what is hopefully a clearer close-up look at how this is supposed to work: The third most common error is not cleaning the mold lines off of the bottom of the doors. If you don’t scrape these flat then the doors will not close all the way. You might want to shave these down a little more than seems necessary because when you add paint to the door bottoms and the base of the model, the added thickness may also prevent the doors from closing or rub the paint off due to friction. This model is very carefully engineered and the clearance on the doors is extremely close.

When I built my Drop Pod, I found it easiest to build and paint it in this manner:
– Build the entire interior harness system and paint it.
– Paint the interior base, then glue the harness system to it.
– Paint the bottom of the Drop Pod.
– Assemble the doors and paint them.
– Assemble and paint the upper intake assembly with gun.
– Paint the fins.
– Glue the bottom and the interior base together with the now painted or mostly painted doors inserted into their proper slots.
– Glue one or two fins onto the base and upper intake assembly. Now glue on the rest of the fins.
– Finish painting the model as needed, then matte seal.

The pictures used in this article are of the first Drop Pod I built and painted for my new custom Space Marine chapter. For anyone who missed it, there’s a painting guide for the Space Marine Captain model I painted for this army back in September. The picture at top shows a side view of my Drop Pod and the picture below a top view that allows you to see the little painting flourish I’ve added to the intake hub. I hope this guide helps some of you get your Drop Pods built and painted just the way you’d like while avoiding some potentially annoying assembly errors. With alien peril at every turn, it’s essential that the Space Marines have their equipment in good working order. Have fun!