BATTLE REPORT: Streets of the Dead 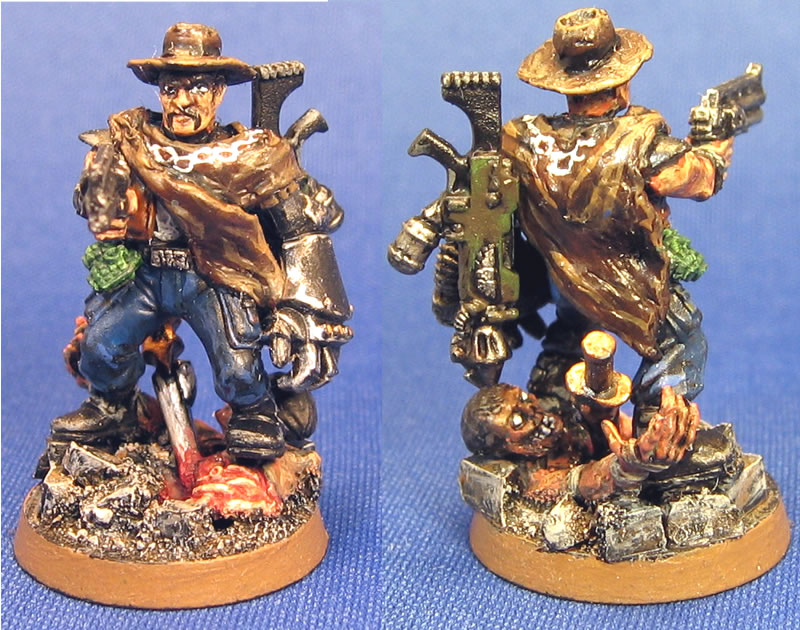 GW stores around the US ran a “Halloween Spooktacular” last weekend. Among the many events that were part of the fun-filled weekend were open games with zombie uprisings as their theme. The game at our local Battle Bunker was called “Streets of the Dead”. This entailed players bringing a miniature to represent themselves, then trying to escape from a city overrun with zombies. The game ran on Friday night with five participants and again on Saturday with about a dozen. At the encouragement of GW staff, some miniatures were converted to closely resemble in some way the players who built them, but without knowledge of what equipment would be actually available in the game. Just before the game a list of equipment options with point values was made available to players. Players could then choose up to a certain points limit in equipment, but anything chosen on the list needed to be represented on the model in some way. For example, if you had modeled your miniature with a sword, swords were not on the equipment list, but improvised cutting tools were so you could purchase that and have the sword represent it. Luckily for me, flame throwers were on the list and I had modeled one. I was going to need it!

The scenario involved a long trek through two tables placed end-to-end, first through a zombie filled city, then through the wooded outskirts to a landing pad where an aircraft would take any character who could make it away from the horrors chasing them. Counters representing various medical, weapon and ammunition upgrades were scattered throughout the city. The rules were a hybrid of Lord of the Rings and 40K in that there was a priority roll each turn to see who went first, the players or the zombies. If players survived a round of close combat, the zombies would be pushed back so that the character might have the chance to run for it in their next turn.

Once a player made it out of the city, the pilot flying in, who turned out to be an Ork, radioed ahead that he had only one seat available on his aircraft as he had brought the wrong one. Only one player would be flying out of the overrun city! What did you expect from an Ork, anyway?

In the end, no one made it onto the aircraft. In the first run on Friday night, one person made it to the bottom of the landing pad ramp before being overrun. I then made it an inch or so farther onto the ramp before being overrun. That was as far as anyone got on Friday night. The Saturday event ended somewhat similarly with no one of the twelve players making it out alive. Small prizes were awarded for largest number of kills and who made it the farthest. There was also a conversion contest where people in the store voted for their favorite converted player miniature; I was lucky enough to receive that award both days.

Here are a few pictures of the event. Click on the small photos below for larger versions.

My “mini-me”. The clothes and revolver were inspired by the “Man With No Name” movies of Sergio Leone. The miniature of a friend and the second closest to making it out in the first run of the game. The players had to traverse several feet of dense city terrain, meandering through narrow alleys and ruined buildings. I get swamped trying to take the shortest route through a narrow alley, but eventually fight my way out. Note the blue bomb squig in the right of the photo. I took a chance and deliberately wounded the bomb squig so he would explode, taking several zombies with him and clearing some space for my escape. I survived the exploding squig, then flamed the remaining zombies and ran as fast as I could out of town. Meanwhile, my friend bolts along the edge of the game table, limiting the number and direction of attackers till he makes it to the woods outside the town. After escaping the city, other horrors besides zombies await the players. This mutant beast is big, fast and has multiple wounds. The Ork pilot anxiously awaits the arrival of one of the players so he can get out of there himself. One person almost makes it to the aircraft, but the zombies get priority and the player is overrun just moments from escape. Notice the huge mutant in the photo! Then I almost make it, but again, the zombies win priority and I’m overrun. Thanks to Games Workshop for providing a fun and entertaining way to spend Halloween. Everyone seemed to have a great time, staff and customers alike. Many thanks to our local GW Battle Bunker staff for all their effort. Now I’m really looking forward to that Lucky 13’s Apocalypse battle going on tomorrow!