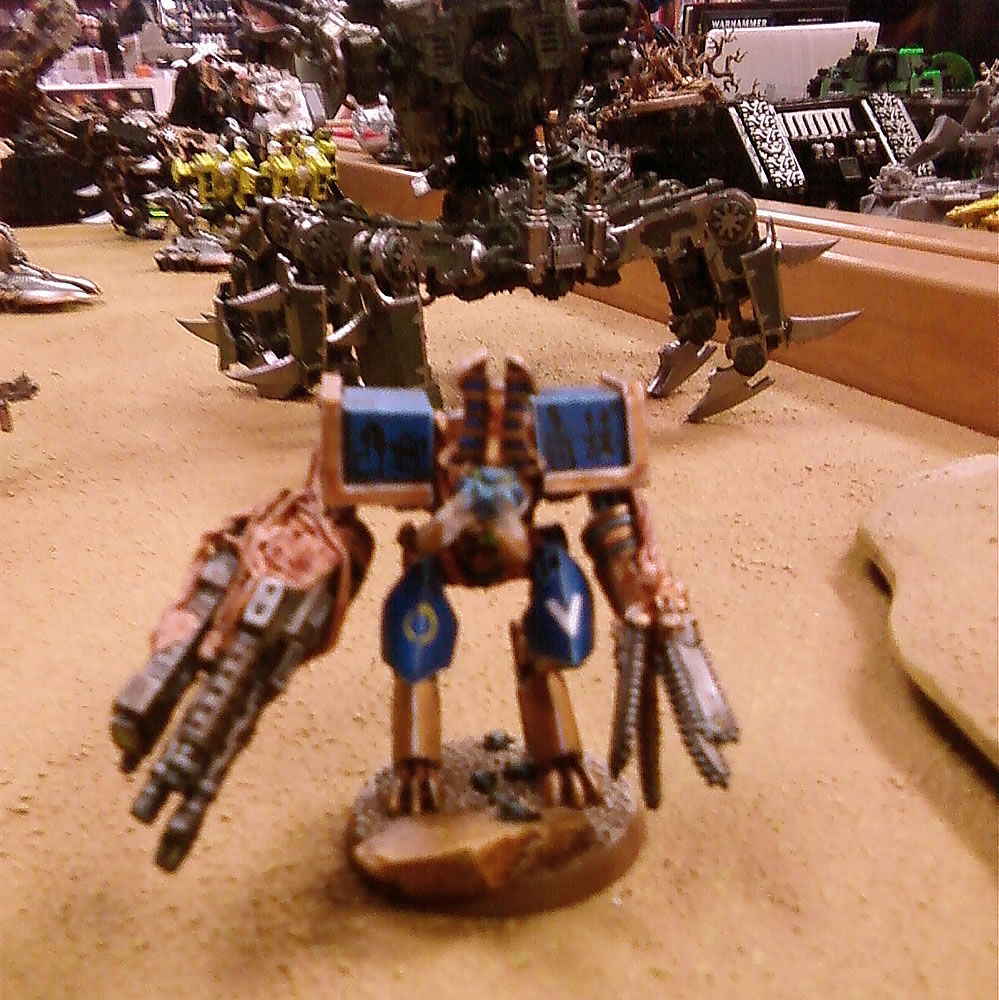 Welcome to the Games Workshop Olney, MD, store opening event recap. First, let me say thank you to all of the Bell Of Lost Souls readers and their friends who turned out on December 20 to make the store’s opening weekend a success. You were numerous! Also, many thanks to the GW management and staff of the Olney store for providing all of us customers with so much fun. Here’s a summary of the day’s events, the highlight being a battle report with pictures.

When I arrived at the store a little before opening to get set up for the model display and Brass Scorpion building I was scheduled to provide there were already customers waiting outside the door. GW fans are enthusiastic for sure! The store opened at noon and filled with customers rather quickly and stayed fairly busy till near closing at 9 PM. There were prize raffles on the hour throughout the day. The hobby table was full all day with people building and painting models. I had lots of company while I built the store’s Brass Scorpion and then painted some of my own models after. The mega-battle began at about 4 PM and lasted till about 7 PM.

The following battle report with photographs of the first ever Apocalypse 40K mega-battle to be fought at the new Games Workshop store in Olney, Maryland, was kindly supplied by the Bell Of Lost Souls reader known as Blue Phoenix. On behalf of the Fly Lords and all of our readers, thanks to Blue Phoenix for taking the time and effort to supply such thorough coverage of the event. Enjoy!

First turn was decided by a Waaagh! off, both sides tied the intial exchange, so it was down to the commanders, with disorder coming out ahead.

The left half of the Chaos side advanced at full speed, with orks, the 2 scorpions, some scarabs and gaunts/rippers leading the charge. The right half was an armored advance, exchanging shells and lasfire with the tank company that had set up opposite.

The first turn of Chaos shooting saw Calgar’s land raider destroyed, and the hero then valiantly assaulted the tide of orks heading towards him, only to be ambushed and from behind by genestealers.

Tanks were exploding on both sides, but with order taking the most casualties.

Turn 3 saw the demise of Calgar by a Daemon Prince of Nurgle, after his squad was ripped apart by the outflanking genestealers (see picture 2 below, the model with the yellow shoulder pad is Calgar).

The order side would not go down without a fight and threw everything it had into taking the right objective that was contested, and eliminating the disorder commander (Daemon Prince of Tzeentch).

Turn four saw the Brass Scorpions engaging the two Baneblades, eviscerating them in a spray of molten brass and flying shards of metal.

The Necron warriors and Termagaunts consolidated around the Chaos objective, but after running out of enemies to kill, the Brass Scorpions descended on their own side, obliterating an entire ripper swarm and casuing heavy losses to the Termagaunt and Warrior squads.

The end of the game saw a victory by the forces of disorder, having one objective, contesting the other, and having killed the enemy commander, while having their commander still alive. The new Olney GW store is relatively spacious and comfortable and I urge anyone who is able to check it out to do so if they get the chance. Thanks again to our many readers who supported this event and for being so nice. Several of you introduced yourselves to me throughout the day and it was a pleasure meeting so many friendly hobbyists. I hope you enjoyed the day as much as I did.

Here’s wishing everyone a fun, safe holiday season. Here are a couple extra tidbits for you to enjoy. Here’s a link to some amazingly well painted models from the Polish Golden Demons. Also, several of the new Lizard Men kits are available for Advance Order now and you can see pictures of those here.

Note: The photo at top is of one of the ancient Egyptian themed Thousand Sons Obliterator conversions of a friend who’s army was featured on the GW website in photos from the last Grand Tournament. You can see those pictures of his army here.