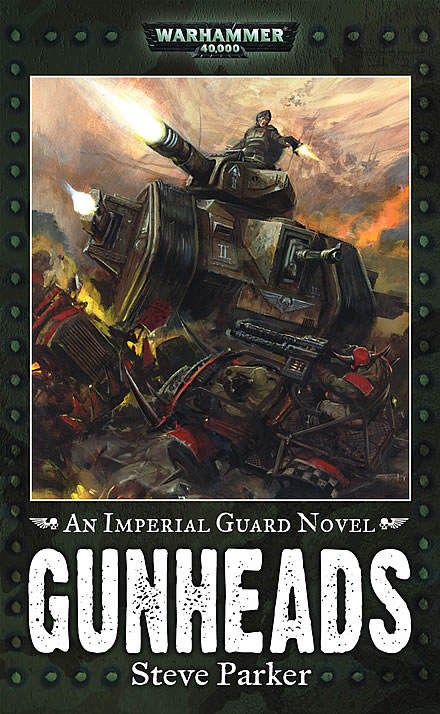 A review by Timo

This winter, it seems we are being bombarded with Imperial Guards novels. Since most of the infrantry regiment has been incorporated in past novels, Steve Parker now brings us a story about tanks.

Parker gets some serious brownie points for this choice of topics! After all, who doesn’t like tanks?! You there in the back… Please sit back down, Tyranid players don’t count.

Okay, enough musing about those hunks of steel on wheels, let’s get to the story.

Golgoltha: a planet firmly in the hands of the Orks. This is where Comissar Yarrick lost his Baneblade “Fortress of Arrogance” 38 years ago.

Hoping to save a spot for himself in the annals of Imperial history, senescent General DeViers takes on “Operation Thunderstorm”, a suicidal undertaking seeking the recovery of Yarrick’s lost tank.

Operation Thunderstorm heads out with just one armoured regiment to occupy Golgoltha’s key spots, but several landing capsules are lost in the storm while entering the planet’s atmosphere.

One of these capsules is manned by the novel’s main character, Sergeant Wulfe and his crew, as well as the tank “Last Rites 2”. This is the beginning of a rather bloody trek back to the regiment, whose search for the “Fortress of Arrogance” is even bloodier.

The soldiers are not just decimated by the Orks but also by the planet itself. Sandstorms, parasites and the tiniest of particles that change the human organism turn this search mission into a race against time.

You’d think all that would be just about enough to deal with, but it also turns out that the Adeptus Mechanicus Adepts accompanying them are following an agenda of their own in this operation. Will their directions really lead to Comissar Yarrick’s old Baneblade?

Gunheads’ weak point lies in character development. While Wulfe and his crew are well developed, interesting characters keep popping up all over the story just to disappear into nothingness without any further description or actual plot.

Another drawback is the fact that some strands of the plot are not carried out to the end. This unfortunately creates open endings. I know many people love those, and I can only speak for myself here: I truly don’t.

This book’s strength is not just in the tanks – I already mentioned those at the top – but also in a story full of suspense and good ideas concerning a planet’s influence. The changes in the soldiers on Golgotha are portrayed as very subtle, yet very fatal.

All in all, it’s a respectable book about the 81st Cadian Armoured Regiment that deserves its worthwhile spot among 40k novels.

~Thanks a lot Timo, and there are more Black Library reviews coming down the pipe for you all. Comments are welcome.