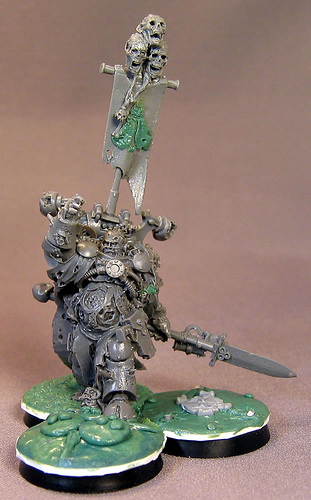 Forge World makes some truly fantastic models and most Warhammer fanatics at some point want to try a hand at a few of those amazing kits. However, once one gets past the skill and complexity issues needed for some of those resin models what often remains is the fear of spending the large sums of money required to obtain some of them. While many of us dream of huge Forge World tanks, flying machines and Titans the cost is often just too much. What is easily forgotten, however, is that Forge World makes some really great smaller kits that cost about the same as or aren’t much more expensive than regular GW product. These smaller models might have a lower price tag than Titans and tanks, but they are huge in the amount of detail and unique flavor that are hallmarks of the larger Forge World kits.

For example, the Nurgle Sorcerer pictured above is just $20 US when purchased at Battle Bunkers. That’s about the same cost as many character model blister packs sold by Games Workshop. I purchased this model last summer and just custom based him yesterday. The detail on this model is endless and intricate and the model commanded me to make him a base worthy of Nurgle! He makes a great show piece for any Chaos Marine army without adding significant cost or construction time to it.

There are many other great kits from Forge World that can enhance your armies without breaking the bank. Dreadnoughts are some of the best looking models from Forge World and they cost about $68 US domestically if you buy Forge World arms to go with them. The Tau have several wonderfully detailed and unique Battle Suit models for between $40 and $50. Orks, Imperial Guard and other armies also have a few modest sized and more modestly priced models that are not modest on uniqueness and detail. Forge World also makes some terrific scenery pieces that are not too expensive, but will enhance the look of any game table.

As was pointed out in another recent article here on BoLS, if you’re a non-UK customer and mail order your Forge World right now, the exchange rate at the moment for many currencies is more favorable compared to the pound than has been the case for quite some time. The rate for the past couple weeks for the US has been hovering around $1.40-$1.43 to the pound. This means a model that costs £10 (e.g., Nurgle Sorcerer, Land Raider doors, Rhino doors) will cost about $14 US. A Tau Battlesuit that normally costs £20 or $40 in the US will be just over $28 when mail ordered, less than the price of a regular GW Tau Battlesuit Commander box set. A Forge World resin Dreadnought and arms will be about $48 US when mail ordered at the current exchange rate. Khorne Terminator Lord Zhufor costs about $21. An £85 Arkurian Pattern Stormblade will be about $120, only $25 more than an all plastic Baneblade! Of course, the savings are even bigger when you order the extremely large kits if you’re lucky enough to be able to do that.

Now the 15% shipping fee will add to the cost when mail ordering, but remember that orders of £250.00 or more get free express shipping. Combining smaller orders with a friend or friends will allow everyone involved to take advantage of the free shipping offer and your models will arrive that much faster too. Express shipping from the UK means your models will likely arrive just a couple days after they are shipped. Forge World also has advice for assembling resin models right on their website.

Edit, Feb. 6: Judging from some of the comments, there are people out there with questions about shipping time and miscast or warped parts. Here are some tips:
1) Shipping time. As was surmised in a comment below, shipping time will be affected if a model or models in your order are not in stock. Your order may be delayed while certain parts of it are being produced. During the “Titan craze” last year when Titans were being ordered about four times as often as they had been in the past, there were significant delays in filling some orders. This is an unfortunate reality with Forge World. They are a relatively small operation and delays do occur on some orders while others are shipped with great alacrity.
2) Miscasts, damaged parts, warped parts. If you have parts that are severely warped, while it is quite annoying they can be fixed by warming them up per the tips in the instructions that come with the kits. Warm water or hairdryers are two common methods for warming and then reshaping parts. If a part is defective, Forge World does have a customer service number on their website and they will take care of the problem if you contact them.

A friend and I couldn’t resist this tempation ourselves and combined to order a few Forge World goodies last week. The models were far cheaper than they would have been just a few months ago, about 28% cheaper! The order was shipped express the next day and arrived two days after that. Now if only I could build and paint it all that fast. So what Forge World kits are some of you suddenly thinking of getting while the exchange rate makes them more affordable than they’ve been in a while? What did you already buy if anything due to the lower exchange rate over the past few weeks? The comment area is open below and if you buy something cool and paint it up nicely, be sure and share a link to some pictures with the community. Perhaps I’ll do a follow-up article in the near future for people to share the fruits of their sudden Forge World forays, especially if I can get one of my own new Forge World projects painted in short order. Have fun.