EPIC: Getting Started With Epic 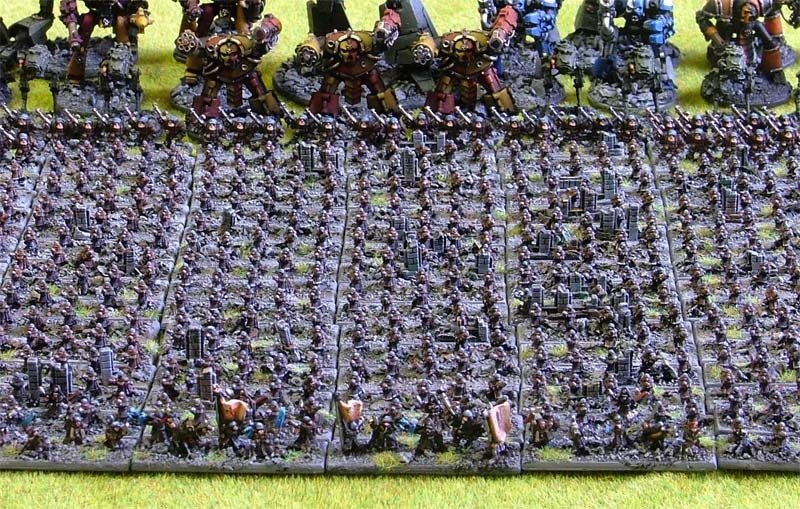 This week’s Epic post discusses how to start collecting an army to get into this great game without breaking the bank. I’ve outlined four different and effective 1,000-point starting armies: Imperial Guard, Space Marines, Eldar, and Orks. I’ve described the strengths and weaknesses of each army (and with which you should already be familiar if you play WH40K), and also tried to describe how you might choose to play this force. Finally, I’ve put prices for each of the box sets or blisters you would need (in US Dollars) to give you some idea of the entry cost.

NOTE: Given the current fluctuating currencies situation, these prices–while accurate at time of writing–could be entirely out of whack by the time you read this, so I recommend you check the current prices on the GW online store.

At 1,000 points, your options are pretty limited, as are the forces you can muster. The usual game size you’ll read about in battle reports is around 3,000 points. Do you remember when you were starting out with Warhammer 40,000, though? You probably started with a 500-point army then. It didn’t offer you the scope that a 2,000-point game provides, but it was fun and it was a start. Well, a 1,000-point Epic army is roughly the equivalent of that 500-point Warhammer 40,000 army. You’ll appreciate, then, that–at 1,000 points–there’s a lot of room for growth.

Some existing players may disagree with these army selections, but (in my defence) I have focussed here primarily on keeping the cost of entry low while retaining reasonable effectiveness. You could combine these units several ways to make a 1,000-point army, going with either an armor- or infantry-focussed force. One possible combination would be:

Tactica
This Imperial Guard army wins by destroying the enemy’s will to fight. Aim to achieve the Break Their Spirit and Blitzkrieg victory conditions.

Space Marines (Codex Astartes)
Strengths: Flexible and exceptionally tough infantry. Fast and hard-hitting.
Weaknesses: With small and expensive formations, marines are always outnumbered and therefore susceptible to out-manoeuvring on the ground. They require high mobility to be truly effective. With these, you can easily make the following 1,000-point army:

Tactica
With this army, a reasonable game plan would be to hold your own blitz objective with the Devastator detachment and hold the other two objectives in your half with the two Tactical detachments for the Defend The Flag victory condition, while also doing your best to ensure there are no unbroken enemy formations in your half of the table for the They Shall Not Pass condition.

Eldar (Biel Tan Swordwind)
Strengths: The Eldar are fast. No other army can get around the battlefield as quickly thanks to their high-speed skimmer vehicles. Also, the Farsight and Hit And Run Tactics abilities provide the Eldar a tactical flexibility that their opponents can only dream about.
Weaknesses: Expensive formations. Armour formations are fragile, both in terms of armour and suppression (they are easily broken). They require high mobility to be truly effective. The Eldar Warhost box set provides a lot of flexibility by providing both Guardians and Aspect warriors. With these, one possible 1,000-point Guardian-centric army might be the following:

Tactica
With 1,000 points, it is difficult to bring the Eldar’s speed to the fore for their troops (by purchasing transports), but you can still bring plenty of pain. With Hit And Run Tactics rules are used effectively, the Fire Prisms can be particularly nasty, and with this force you would use them to achieve your BTS victory condition. The second victory condition will be more difficult, but They Shall Not Pass or Take And Hold should be achieveable. VASSAL40K:Epic
For those of you who are still unsure about Epic and hesitant to expend your hard-earned without ever having played the game, I highly recommend you check out VASSAL40K:Epic, available from http://www.vassal40k.com/

VASSAL40K:Epic is an invaluable learning and play-testing tool, not to mention great for producing battle report diagrams. Why not try play-testing the armies I’ve listed above?
The tool is expected to expand soon to include the Eldar and other armies, which will be great to see.

Further reading
If you want to learn about force composition, I highly recommend you read Moko Cwiklinski’s excellent article Building and Using Epic Armies, which discusses in detail many of the ideas I’ve mentioned in passing. You’ll find the article on the Games Workshop server at http://www.games-workshop.com/MEDIA_CustomProductCatalog/m1320014_Epic_Building_and_Using_Armies.pdf

For those of you who prefer to jump straight in–none of this mamby-pamby “toe in the water” stuff for you!; you know who you are–there’s a great discussion about 2,000-point starting armies that’s been running on TacComs:

Thanks to Mark Logue and Onyx for the use (again) of their images. Special thanks in particular to Dezartfox, developer of VASSAL40K:Epic, who has done a great, great thing by producing the Epic module for VASSAL. You are so very high in my Cool Book right now…

~Give it up for GR00V3R guys, and let him know what articles you would like to see next regarding Epic.