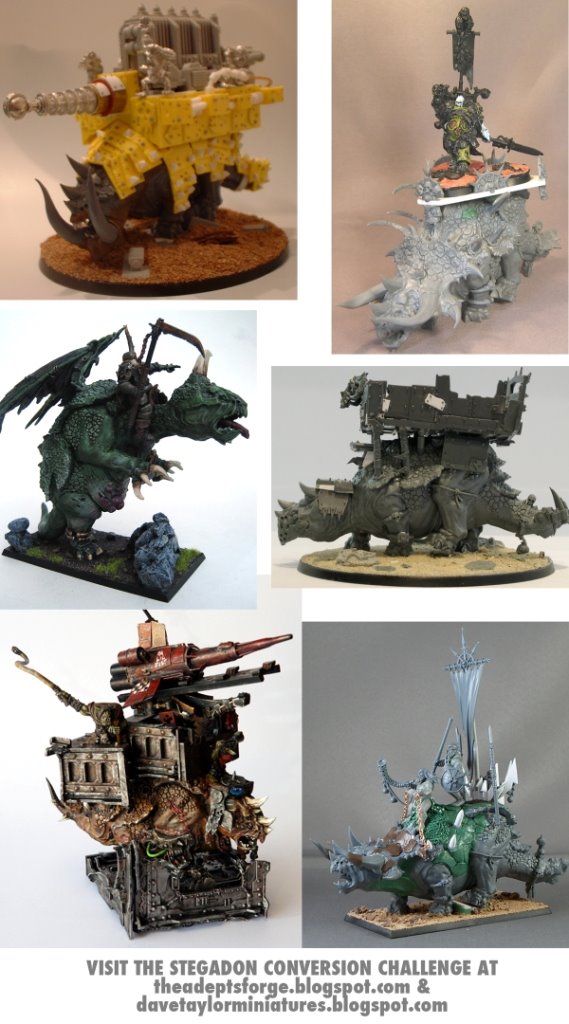 I recently participated in a Stegadon Conversion Challenge with a number of other veteran hobbyists. The idea behind the challenge was to find fun uses for the Stegadon model that did not involve the usual Lizardmen Army surroundings. Since converting a Stegadon to non-traditional nefarious purposes was something I had intended to do anyway, I jumped at the chance to participate in this activity with so many terrific and talented hobbyists. I don’t have time for a full Lizardmen Army with my backlog of other Warhammer projects, but a large dinosaur model like the Stegadon was too much to resist and I was just looking for an excuse to convert and paint one for one of my existing armies.

Pictures of the finished projects from this challenge are currently posted online, half of them on The Adept’s Forge and half on Dave Taylor Miniatures. I hope you’ll take the time to check out the cool conversions generated by this activity. Perhaps you’ll see something to inspire you to take up an unusual conversion yourself. Thanks and happy converting!

POST CHALLENGE NOTES, APRIL 24:
Well the Stegadon Challenge is over now, so for those curious about my participation in this activity, here are the design notes I drafted at the time I submitted my finished material.

Conversion Log, drafted April 2
When the plastic Stegadon kit was released I knew I wanted to buy and convert one immediately. I love dinosaurs and the Lizardmen model range, but with no time for a full Lizardmen army, I began scheming on an excuse to use a Stegadon (rhetorical question: why is it named for an extinct mammal?) in another part of the Warhammer hobby. When I was invited into this Stegadon Challenge by Dave and Jeff it was all the excuse I needed to start on this project. One goal I always had in mind when I first began contemplating what to do with the Stegadon was to not significantly change the model. In other words, I’m quite fond of the Stegadon sculpt and wanted to use it and add to it without making any dramatic alterations to it. With this in mind, I began scanning my Apocalypse volumes and Codex books for inspiration. In the end I decided to have my Stegadon perform double-duty, using ideas from both Imperial Armour: Apocalypse and the Chaos Space Marine Codex.

First, I liked the Apocalypse datasheet for the Spined Chaos Beast in IA: Apocalypse, so I decided that the Stegadon would do nicely there. I scanned the Chaos Spawn plastic sprue for parts and found some wonderfully curved spikes that fit nicely in the round holes molded on the Stegadon’s back. These holes are meant to hold the pegs that support the howdah that comes with the Stegadon, but I filled all six of them with spikes. Then, I used Kneadatite (“green stuff”) to sculpt scales into the three remaining vacant areas on the Stegadon’s back. I also used green stuff and super glue to secure small spikes to the ankles of the rear legs. With these simple changes, my Spined Chaos Beast was complete without significantly damaging the original look of the Stegadon.

Next, I decided that the Stegadon might also make a nice mount for that terrific Forge World Nurgle Space Marine Sorcerer that was released last summer. I’d already custom based that model (featured in an article here on BoLS a while back) and even started painting it a bit and thought that a large mount upon which he could ride might show him off even more. There are rules for Palanquin of Nurgle in the Chaos Space Marine Codex, so this conversion would be game useful as well as fun.

Using thick plastic card for sturdiness, I cut a truncated triangle shape upon which the Sorcerer’s custom base could stand, then added decorative bits to it. These bits serve not only to enhance the appearance, but to keep the model from sliding off his perch as he makes his way into battle. The custom base of the Sorcerer was made using three 25mm round bases, plastic card to secure them together, and sculpted green stuff on top. The parts used to decorate the palanquin come from the plastic Saurus Lizardmen set kindly donated to me by a fellow hobbyist. There are many spiky bits on those sprues and one decorative bit even conveniently has a trio of skulls on it, a sure sign of Nurgle’s favor. These bits were glued in strategic locations around the edge of the palanquin to ensure the Sorcerer’s base stays on it without actually having to glue him to it. In the end, the Sorcerer is removable from the palanquin and the palanquin is removable from the Stegadon. The palanquin is held in place when mounted on the Stegadon by two pegs added to the bottom that sit snugly between spines on the Stegadon’s back. The pegs were made from the bottom of plastic poles on the Saurus sprue and secured with green stuff and super glue. The top of the platform is plain because the Nurgle Sorcerer’s custom base will provide the atmospheric conversion detail when he stands upon it. As for the surrounding detail, again I kept the decorations and conversion work somewhat subdued so as to not interfere visually with what will be the focal points of this project when all parts are painted, the Stegadon and the Nurgle Sorcerer. I’m still pondering ideas for a custom base for the Stegadon and perhaps adding a few small additional bits here and there on the palanquin, but the major work is done.

There you have it, one Stegadon and two uses, all in the service of Chaos and all without significantly altering the look of this wonderful model. As for what to do with the terrific howdah and “engine of the gods” structure that comes with the Stegadon, I already have some ideas in mind there. I think those parts will make great scenic objective markers, “warp gates” and more. The Stegadon is a highly versatile kit filled with many useful parts and fantastic detail. I hope you have fun with it too!
———————————
Tools, Materials and Models Used
Hobby knife
Small metal ruler
Pencil
Kneadatite (“green stuff”)
Plastic card, varying thicknesses
Polystyrene plastic glue
Super glue
Stegaodon kit
Lizardmen Saurus kit parts
25mm bases
Forge World Nurgle Space Marine Sorcerer