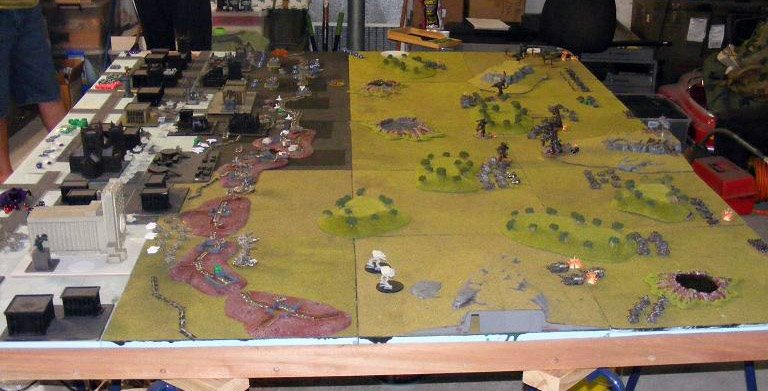 A guest article by Global Epic-Evangelist: GR00V3R
Want to see what a really big Epic stoush looks like? Get your Epic on and check out this 16,000-point game!

Recently, a few mates of mine threw down at 16,000 points per side. A large Imperial Guard army supported by Ultramarines defended against an assault by the Chaos Iron Warriors Legion. For the record, 16,000 points is a lot for a game of Epic.

The forces employed are listed below. The Guard/Ultramarines player had to spend 2,000 points on defensive fortifications.

What follows is not so much a battle report as it is “a pictorial journey through an 41st Millennium warzone”. Enjoy.

To Arms!
The Guardsmen and the Ultramarines took up defensive positions within the fortifications on the city’s perimeter.

The Guard forces spread themselves evenly from the southern flank and up while the Ultramarines manned the defenses on the northern flank. In the distance, the Iron Warriors lines filled horizon, punctuated here and there by the silhouettes of Chaos Titans.

Most fearsome of all, however, was the presence of an Abominatus Imperator Titan. When it came, the Chaos attack was rapid and brutal, with the Abominatus Imperator leading the charge. Artillery thundered on both sides and death rained down from the skies. As the day progressed, bodies and armour were torn apart on both sides by the awesome weaponry brought to bear. An orbital assault by a Chaos warship and the deadly impact of a Dreadclaw assault was not enough to break the valiant defenders; it heralded the beginning of the end, however. With both sides exhausted and running low on materiel, the Chaos forces withdrew to regroup. With the end of the day’s fighting, a lull descended on the battlefield…but it was a break in the war that both sides knew would end all too soon…

Packing Up
This battle ended in a draw. You can see a proper battle report here on the Aussie Epic Campaign forums.

When you can play the game at this sort of points level and still have a tight game throughout, you know it’s well-balanced. Kudos to you, Jervis Johnson!

Thanks to CAL001, Cthulhu_Gump and Snap for the use of their images, not to mention for playing the actual game (sorry again that I couldn’t join you on the day). And, of course, a HUGE thanks to Jervis Johnson for creating this amasingly amazing game–you rule, man.

~Give it up for GR00V3R guys, and let him know what articles you would like to see next regarding Epic.