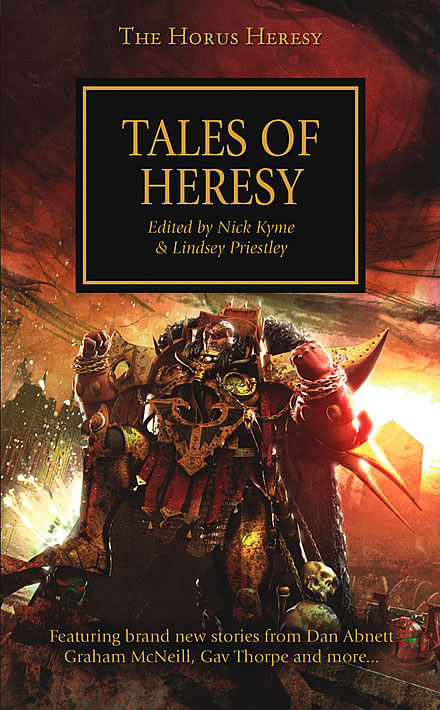 A guest review by Timo; Tales of Heresy – Short Stories

I gave some though to the right way of discussing this and concluded that it’s best to look at each story seperately. Of course there isn’t much I can say about the actual plot, as you all know; the plots are being kept smaller and smaller. Well, here we go:

Blood Games – Dan Abnett
A hunter is on a mission, his goal lies in the Emperor’s fortress. Over the course of several months he skulks towards his goal, hiding in the shadows, taking on different identites, and tries to outdistance his pursuers. Will his mission be a success?

This first story in the book is one of Dan Abnett’s standard narratives. The initial part is pretty gripping and well-written, while the second part is a tad plain and predictable. Maybe the already short story should have been kept even shorter.

Wolf at the Door – Mike Lee
Mike Lee offers us a story about the 13th Company’s Space Wolves. Wolf Lord Bulveye comes across a planet that refuses to join the Imperium, but before this planet can even be conquered, a new opponent appears, and becomes their joint enemy: Xenos.

Will the collective opponent give this world what it needs to cross over and be loyal to the Imperium? Wolf at the Door is entertaining and elucidates the dark sides of the Emperor’s crusade.

Scions of the Storm – Anthony Reynolds
Sticking to his Word Bearers, Anthony Reynolds gives us an impression of his the nature of his novels’ characters 10,000 years in the past. The 34th company, XVII Legion, is on a mission to rid a planet of Heretics. Is this assignment really what it seems?

Reynolds keeps his story familiarly bloody and full of action. The ending is slightly predicable unfortunately.

The Voice – James Swallow
James Swallow’s bit follows a Novice-sister of the Sisters of Silence and ties in with the novel “Flight of the Eisenstein”. The Black Ship “Validus” is considered missing, and a second ship is sent to find out why the “Validus” isn’t performing its astrophatic check-ins.

The plot is slow and not really exciting, until the ending actually brings a surprise. Plodding story, great ending – now that’s something else!

Call of the Lion – Gav Thorpe
Gav Thorpe sticks to the well-tried and dedicates himself to the Dark Angels again, planting a familiar face into the story as well. The plot is close to that of “Wolf at the Door”, which sadly doesn’t make it any more gripping, except here the conflict between the Terran and Calibanite Marines comes to the fore.

Once again, Thorpe gives us insight into the Dark Angels that show the dubious nature of this Legion’s Primarch. All in all it would be a good story if it didn’t have to share a plot with “Wolf at the Door”.

The Last Church – Graham McNeill
This story takes place during the Unification Wars on Terra, the setting being – who would have guessed – a church. This church is entered at a late hour by a man who calls himself Revelation. He strikes up a conversation with the church’s priest about religion and visions.

Graham Mc Neill’s story is this collection’s diamond, since the story is not only well-written but also gives the reader some insight into heretofore uncovered realms of Warhammer 40k stories. We find out how the Imperium’s original vision differs from the actual situation 10,000 years later. This is definitely one of the best 40k stories I have ever read.

After Desh´ea – Matthew Farrer
Along comes another short story that is made up largely of a conversation between two characters, in this case Angron and Kharn. Angron is enraged: he has been named Primarch, and his planet Desh’ea has been conquered, in the course of which his own “brothers and sisters” have been butchered. Kharn attempts to convince Angron to accept his position as Primarch, and has to take a lot of stick for this.

This is the story’s weak point. Angron’s constant violence against Kharn makes the Primach seem more like the Hulk: bitter, disappointed and angry (yet not green!). Although the story opens insights regarding the World Eaters’ history, it blocks itself in a way.

Conclusion
This collection of short stories would be generally average if it wasn’t for “The Last Church”, which makes this book worth the reading. Also, it’s only fair to say that each and every story in this book contains some information about the events within and the reason for the Heresy, which is why all of the stories are of value to the fans. All in all, a solid read, expecially for Horus Heresy fans.