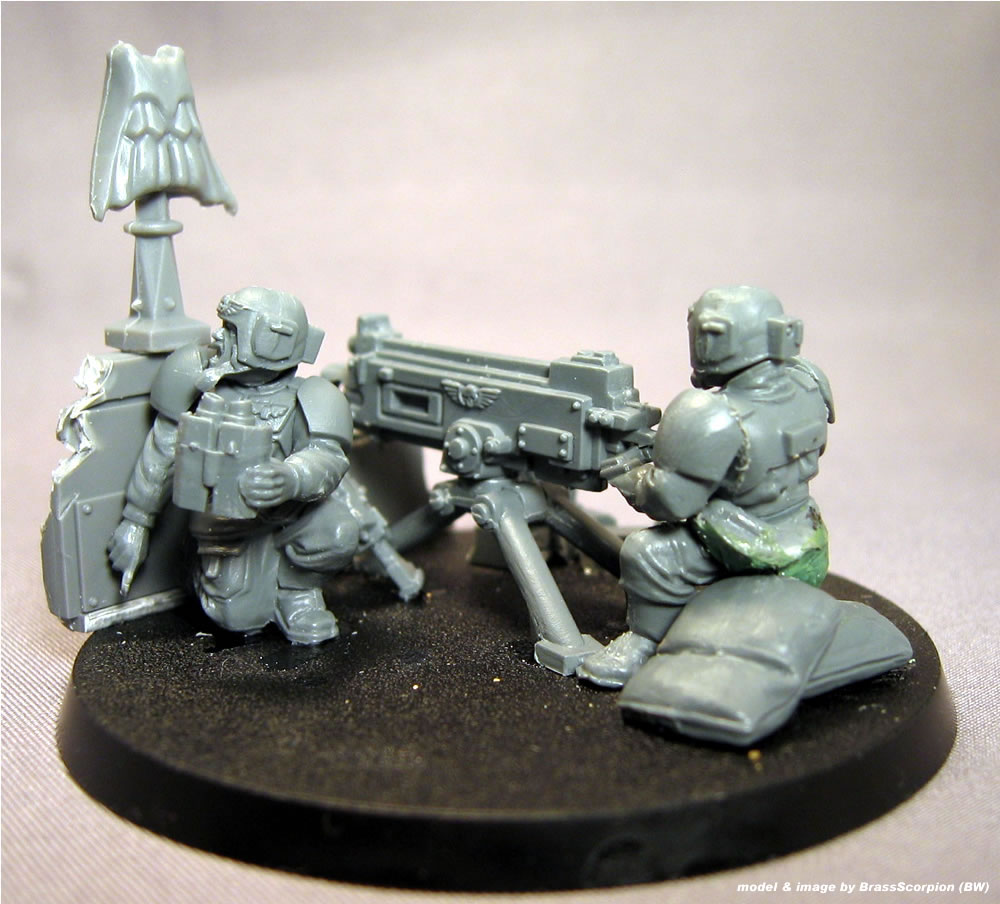 A lot of 40K hobbyists are probably building Imperial Guard Heavy Weapon teams these days, either for new Imperial Guard armies or to add to existing armies. Once you’ve built more than a couple of these models, the standard poses available from the included parts can get pretty stale. Building every team just like the picture on the box definitely gets old fast.

When I first built my Imperial Guard army back in 2006 I immediately began looking for ways to vary the poses for Heavy Weapon teams. Part of this was just for fun, but I also did it because it allowed me to stretch the use of all those extra bits that come with the model. By using some of the regular walking pose troopers from the Cadian Shock Troops box set, I was able to use some of the additional Heavy Weapons that come with a Heavy Weapon team kit. Prone missile launcher teams, standing mortar teams, etc. allow you to use many more of the Heavy Weapons that you get in Heavy Weapon team boxes without buying quite so many of those boxes. It can also allow you to save some of the kneeling pose legs from the Heavy Weapon kits to use for conversions on the poses of regular troopers in platoon squads, veterans, etc.

The pictures shown here are of the latest Heavy Weapon teams I’ve built for my Guard army. I already had two Lascannon Squads and an Autocannon Squad, so I thought I’d build a Heavy Bolter Squad this time. One goal I had for the conversions shown here was to simulate something at least relatively close to real two-man machine gun teams and some of the iconic images associated with them, such as a loader feeding the ammo belt into the gun. Each picture below is accompanied by a bit of explanation regarding what makes it unique.

Below is a front view of the model shown at the top. This is my favorite of the three models shown here. The seated gunner was suggested by a friend and fellow hobbyist who is also an army veteran. Machine gun training in the US Army is done seated on the ground behind the weapon. Of course, after receiving the suggestion I still had to figure out a way to do it! Cutting the bent legs from a pair of kneeling legs and boosting the model up on a sandbag gave me a fairly convincing seated gunner with the help of a little green stuff and some minor sculpting. The spotter has no real converting to him, just careful positioning of the head, torso and arms to make it appear as if he is furtively peering over his shoulder and the wall. His rifle is leaning against the wall just behind him. Cutting and repositioning the left hand on the loader allowed me to pose him as if he is feeding the ammunition belt into the Heavy Bolter. There are a lot of little conversions to this model and it has green stuff (Kneadatite) earthworks and a small shell hole built up on the base. It is ready for priming with sand already glued to the base. The models shown above will have the same coarse sand mix glued to them to simulate rubble and debris from collapsed buildings and blasted terrain. The gunner was made using a model from the Cadian Shock Troops box with minor converting to the waist and neck to get the prone firing pose. The spotter has a lot of cutting and repositioning done to both arms in order to get the one handed grasping of the rifle up on the shoulder and the left handed steadying grasp on the earthworks. Note the shovel in the background leaning against the ruined wall as if it has just been used to build up the earthworks around the soldiers. Also note the loose ammo belt feeding into the Heavy Bolter, which now sits on a bipod, while a closed spare ammo box sits nearby. As you can see, through a combination of kit-bashing, thoughtful positioning, cutting and sculpting, a large variety of poses can be obtained. Many more poses are possible than the few shown here. Use your imagination, experiment, and most of all, have fun!

With my backlog of projects I really didn’t need anything else to paint, especially for a fairly large and already finished army, but cool models are the hobby to me and I just couldn’t resist building a few more items for my Imperial Guard, especially with all the fun new rules and options in their latest Codex.