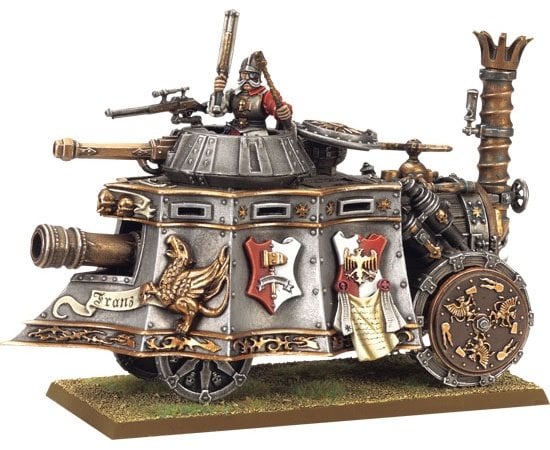 I have a little secret that most don’t know. I have played Warhammer Fantasy Battles (WFB) longer than Warhammer 40,000(40K.) My first and oldest army hails from the Empire. I love the Empire. They have the largest selection of Core Troops and can field most of the weapon types listed in the book. The real strength of the Empire is in their artillery. In order to get the most bang for you buck out of your artillery, you will want to become very skilled at guessing range. To some this will seem like magic, but mastering the techniques I will present will make you an expert artillery man. When you start out with these techniques it will be helpful to have some scratch paper near by, so you can get a handle on range.

Step 2: Applied Mathematics
Scarecrow in “The Wizard of Oz” summed up the principle we are going to use: Pythagorean Theorem. It states: In any right triangle the length of the hypotenuse is equal to the sum of the squares of the two sides. Simply put a2 + b2 = c2. This is where we use Step 1.

Using our battle field reference points, we can now determine where a unit is on the field plus or minus to the closest point. So now all we do is apply a little math and we will know exactly where they are.

Tips on These Techniques
First and foremost: work on these calculations during your opponent’s turn. This will speed up how long you take during your turn. Next, you’ll want to practice. If you practice you will increase your speed, and after a while you’ll be able to eyeball ranges. Third don’t be afraid of over or under guessing, especially in the first round. You will improve with time.

Never let any measurement get wasted. A very common occurrence in WHF is to see your opponent measure the distance between their missile troops and your troops to see if they are in range. This measurement works both ways. If you get quick enough you’ll be able to see potential charge distances, firing distances, and other items that are considered guesses.

For example I had an opponent not believe that I was in range with bow shots I was about to make, and asked me to measure it out, which he is absolutely allowed to do and I was happy to comply. I measured the distance for him, knowing full well I was in range, but as I was doing this I made mental notes of the positions of everything along the tape.

Strictly speaking, the only magic here is the magic that comes from applying math and practicing. As you do this you will also become a wiz at guessing ranges.

What tips and hints do you have when it comes to guessing range? Tell us. Inquiring minds want to know.