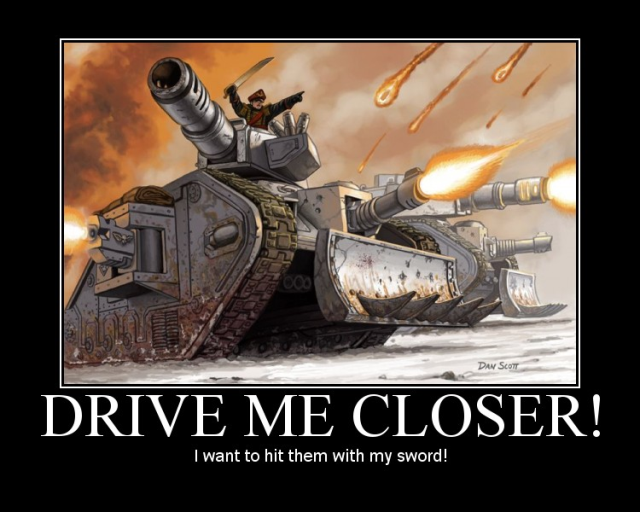 Hi guys. As lots of folks around America are preparing for the ‘Ardboyz competition I wanted to talk a little about something I’ve seen more and more these days.

I think that there is a spectrum of army possibilities that exists within our beloved 40k, ranging from tiny elite armies to hordes, and everything in between. Every so often a new codex comes along and expands the game with exotic possibilities that just didn’t exist before and all of the community has to adjust.

The IG codex has been one of these events. It has given rise to something I call the “Mega-Mech” army builds. With the easy access to vehicle squadrons, combined with the budget costing of many tanks if you don’t go crazy on the upgrades, it is very possible for common sized lists to field @20 tanks. Not sentinels, and little stuff like that, but 20 REAL tanks. Combine that with small cheap scoring units who often have no intention of ever leaving their transports until very late-game and you have one heck of an armoured behemoth that is a real nut to crack for many armies and codices out there.

~My question to my fellow generals, is are you seeing the rise of the mega-mech builds, and how would/are you adapting to deal with them. Please give some concrete examples of what your favorite codex would do to deal with effectively. Also, are lists like these any more unbalancing than the old Armored Company lists that GW eventually chucked, saying the game’s constraints just didn’t work well with them. The floor is your gentlemen.