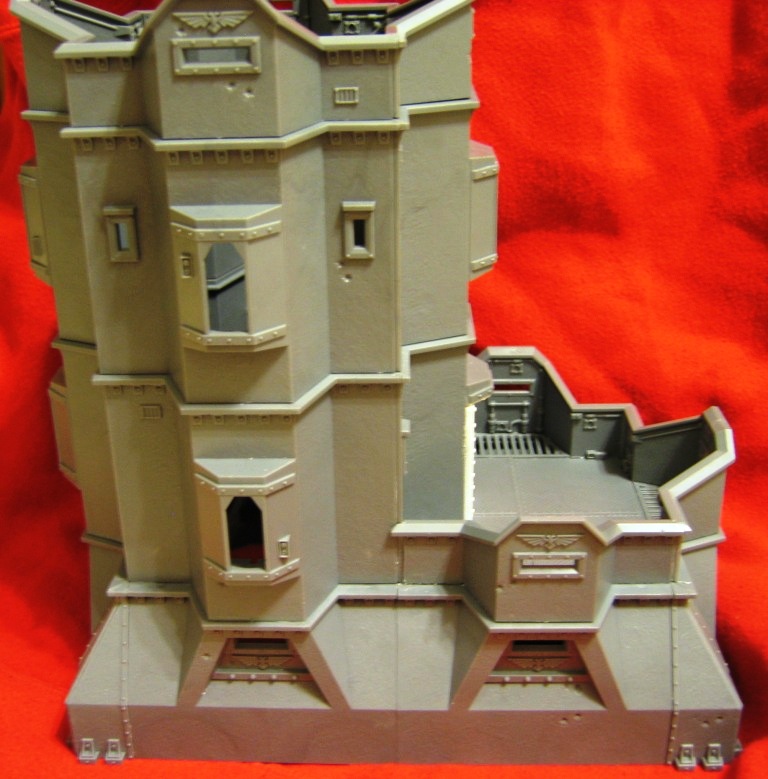 After purchasing the Planetstrike book on July 4 I was immediately inspired by the two-Bastion kit-bash shown on page 24. I knew I had to give the project a go myself and I was going to wait till my Imperial Strongpoint bundle set arrived around July 18, but two things intervened. First, a friend of mine starting working on a similar project and second, another friend of mine actually showed up for our first Planestrike game last Thursday with the same conversion already built. After seeing a finished version of this project I just couldn’t wait, so I bought a couple Bastions at the Annapolis, MD Games Workshop store and started on the project almost immediately.

The pictures above and below provide a close-up of the finished conversion before the start of painting and the addition of final parts like the window and rooftop weapons. If you’d like to attempt this project yourself, here are a few tips:

1) First, carefully join the bases of two Bastions together by leaving the fourth side off of both.
2) Install the floor in the half that will have the crenelations added directly on top. Note that you will leave the crenelation piece off of the side that joins with the other half of the Bastion.
3) Carefully use cutting tools to remove one of the bay window areas from one Bastion side piece. This is where you will install a door so that it appears that the taller half of the Bastion can be exited onto the roof of the lower half. I cut just below the riveted band on the bay window I removed.
4) Construct a door to fill the now open rectangular space. In the Planetstrike book, the GW studio builders used part of the door that comes with the Bastion kit. I decided to save that part for another project by scratch-building a fortified looking door out of plastic card, rod and strips.
5) Trim the two crenelated pieces as needed to allow the Bastion side with the custom door on it to be set properly on the taller Bastion half. This will require the removal of about 1/8″ inch. Plastic flush cutters should work well or a hobby saw.
6) Finish building the tall part of the Bastion as desired. Arm and decorate the whole model to your taste.

There you have it, the double-Bastion bash! Of course, you don’t have to stop there. One friend of mine I mentioned earlier who’s still in the midst of this project is building this conversion with three Bastions and the face of the tall center section will use the Shrine of the Aquila large eagle panel when it’s released. In other words, let your imagination and your hobby skills run wild. There are some other cool Bastion conversion ideas posted on the GW website. Happy kit-bashing. I have to say that I thoroughly enjoyed my first Planetstrike game and am looking forward to more. I also used my Imperial Guard army with their new Codex for the first time in that game and enjoyed getting familiar with that too. I’ve been quite impressed with the sheer fun of every recent 40K expansion starting with Cities of Death. In fact I like the expansions so much, I rarely play a “regular” game of 40K at all anymore.

I’m also terribly impressed with the scenery kits GW is producing these days and the new Planetstrike terrain is as much fun to build and convert as some of their miniature soldiers. The new Bastions are just so versatile and there is a plethora of optional decorative bits in the kits which should prove highly useful on some other projects.

So how many of you out there have tried Planetstrike and what do you think of it? Have you had any fun with the new terrain kits? As always, feel free to share your comments below.