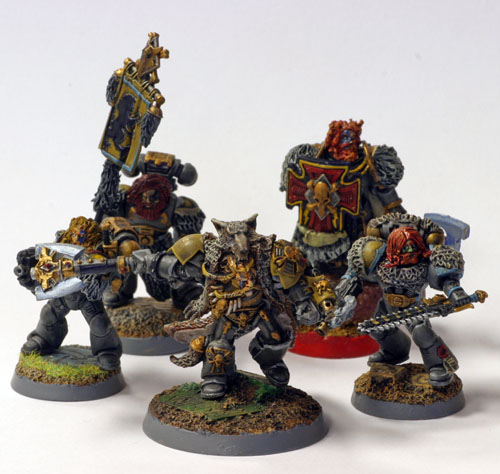 Collated info brought to the community by Warseers: The Dude
GENERAL INFO-To be released October 2009
-Codex written by Phil Kelly
-Space Wolves will supposedly be “even less Codex Astartes” than they were before. This would cover unusual squad sizes etc.

RULES
Army-wide Special Rules
Sagas – Characters can take special skills called Sagas. They are said to work similar to the Vampiric Powers used by Vampire Counts. 75hastings69 gave the example that a character with “Saga of the monster killer” (made up name) may be better at killing Monstrous Creatures, but would suffer a drawbacks such as needing to kill a certain number of them per game.

Wolf Claws – The Space Wolf version of Lightning Claws, allow you to choose to either re-roll “to hit” or “to wound”.

Special Characters-Logan Grimnar: No news yet
-Ragnar Blackmane: No news yet
-Njal Stormcaller: No news yet, but would share the Rune Priest standard rules.
-Ulrik the Slayer: No news yet, but would share the Wolf Priest standard rules.
-Canis Wolfborn: Mounted on a large cybernetically enhanced Fenrisian wolf. Wears Power Armour and has a pair of Wolf Claws. Canis also allows you to take two cavalry choices, either wolves, or more Marines on wolves.
-Bjorn the Fellhanded: Early rumours reported Bjorn would have AV14 all around, but these have been thrown into disrepute recently.

Special Characters will likely have prescribed (maybe unique) Sagas attached to them.

HQ
-Wolf Lords: May take up to two Sagas. They will have a wide variety of weapon options. May possibly be able to make one unit of Wolf Guard a Troops choice.
-Wolf Priests: Combines the skills of Codex Marines’ Chaplain and Apothacary. Armed with Power weapon, Iron Wolf Amulet (4+ Inv) and Healing Balms and Potions as standard. Will allow units to re-roll “to hit” and also confer Fearless and Feel no Pain on any unit they join. May take up to one saga.
-Rune Priests: Armed with Force Weapon and able to take Space Wolf Specific psychic powers. May take up to one Saga.
-Iron Priests: Will most likely be brought in line with Codex Techmarines. May take up to one Saga. It is unclear if they will be HQ or Elite.

ELITES-Wolf Guard/Terminators: May take a Wolf Guard Battle Leader who will be able to take up to one Saga.
-Wolf Scouts: Will supposedly remain the same and gain the option be mounted in a Land Speeder Storm
-Lone Wolf: A one-man unit that will be “really strong” and act similar to Tyranid Lictors
-Wulfen: Possibly a “Legion of the Damned” style Unique choice, or maybe something based on HQ selection. It is unclear if they will appear at all.

HEAVY SUPPORT-Long Fangs: May possibly receive some sort of special rule allowing them to move and fire, but not assault. May take a Wolf Guard as a squad leader.
-Land Raider: Crusader and Redeemer most likely added. Also rumours of a unique Land Raider variant, possibly with three twin-linked Assault Cannon.
-Predator: No news yet
-Whirlwind: No news yet
-Vindicator: No news yet
-Leman Russ Exterminator: Almost certainly removed

~Bigred here. Standard caveats apply to all of this until we have a copy of the codex in hand, and special thanks goes out to The Dude for putting together the latest of his famed roundups. In particular I’ll be eagerly awaiting this “saga” concept, and seeing what they have done to make Long Fangs viable on a 5th edition tabletop.