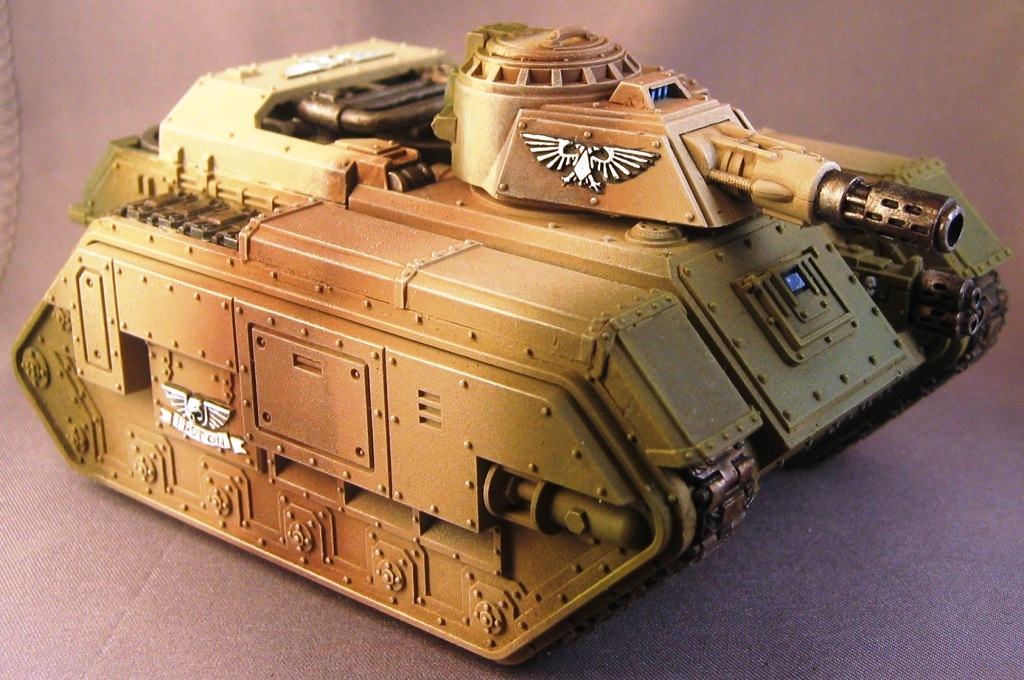 As many of our readers know, I’ve been quite busy lately converting and painting the many variants of the Leman Russ battle tank. As long as I had the tank factory running, I also worked a new Devil Dog and Bane Wolf variant of the Hellhound into production. They were base coated and highlighted using techniques detailed in my recent Leman Russ workshop articles. The details were also painted much the same way as the Russ tanks. However, I painted the plate with the fuel tanks on it separately to save time, then glued it in place after it and the tank were mostly finished. The top plate with the connecting hoses and the two tiny hoses that fit beneath it were also painted separately, then glued in place.

The picture above shows the completed Devil Dog. I chose to give it a multi-melta for the hull mounted weapon. That way I have two melta shots at penetrating whatever the target may be. The range on the two weapons on this variant are conveniently the same too.

The picture below shows a top view of the Devil Dog. I really liked the warning symbols painted on the example on the back of the Hellhound box and decided to emulate it. Since melta weapons supposedly use subatomic fuel of some sort, I decided that radiation warning symbols would be fun. Pictured below is my completed Bane Wolf. I wanted the chemical cannon to have an odd colored corrosion on it indicative of the toxic fuel it spews, so I used thinned down teal (Scaly Green) and Hawk Turquoise over the Chainmail metallic coloring. The hull mounted weapon is a heavy flamer. Two template weapons that blanket the enemy, provide no cover save, and don’t require dice rolling to hit. It’s toxic and fiery game goodness all rolled into one. This picture is a top view of the Bane Wolf. I used a small burst pattern within a yellow diamond to indicate the dangerous nature of the fuel within. The armored contingent of my Imperial Guard army is rapidly becoming formidably massive. When I’m done painting the eleven tanks I started about ten days ago, it’s on to spray coating and finishing another Executioner, an Exterminator, a Chimera, and maybe a few Sentinels too.

So, what do you think of the new Hellhound and Demolisher kits if you’ve tried them out? What variants are you building with these two new kits and how many of each? Tank commanders, report!