All Hail the IXth Legion 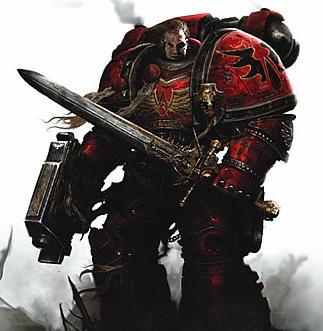 Since the early days of Warhammer 40k, the Blood Angels have defended the Imperium with honor. What began humbly as “the red marines” of Rogue Trader have grown into the proud, yet flawed chapter of Sanguinius. Many have been told tales of their blood crazed visions, and the black-clad brethren who lunge headlong into combat, hoping to end their lives on a enemy’s blade, rather than descend into madness. Few know of the Blood Angels unnaturally long livespan, gifting some battle-brothers with over 1000 years of service to the Emperor, or their unmatched artisanship and attention to detail. Fewer still know of the chapter’s unmatched nobility; the result of facing the flaw every day of their lives.

Whispers on the wind speak of the return of the Sons of Sanguinius in 2010. In any case, the Blood Angels are currently the only army using a “halfway house” White Dwarf codex, that is at once a big improvment over their last codex, yet strangely lacking compared to the full codices recieved by the other armies.

This thread is an open tactical discussion of what you think a full Blood Angel army most needs and should change into into. What would you change to give them a distinct character compared to the other specialized chapters out there (DA, BT, SW)Lets get some specifics in here my fellow Angels of the Blood. Whats just not cutting it on the tabletop, doesn’t match the fluff, or really needs to improve, and how would you do about it? Are there no-brainers in the current rules that need toning down?

~For you non Marine-players, lets hear what you think the flawed, yet most noble of the Astartes most need to make them a a unique Space Marine army to face off against on the tabletop. The floor is yours…