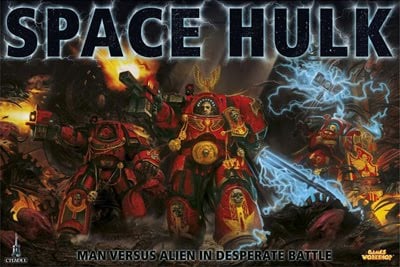 Twenty years after capturing the minds and imaginations of gamers everywhere, the board game that sucked so many in to the Warhammer 40,00 universe, lands on our doorstep with the all the force of a suit of Terminator armor launched from orbit! Space Hulk is BACK!

This new edition of the game is almost exactly the same as the 1st edition rules, which will excite those gamers who remember the 2nd edition release. Let me get this out of the way early: Space Hulk is a BRUTAL game. I have never played a game in which so much of my attention and so much of my identity were so invested. Playing Space Hulk as the Marines is an exercise that will challenge your tactical planning as few games can. Who lives and who dies? Who holds their position, and who advances, and above all hurry…the clock IS ticking. It is an uphill battle with every nerve-wracking step down the void fill corridors of the hulk as you dispense the Will of the Emperor.

Games Workshop hit this one out of the park. The 22 Genestealer models are stunningly dynamic and exciting. In addition to the classic “scuttling” pose, you get some bursting from floor plates, others hanging from broken door frames, and still others looking like they are crawling along walls. A new addition to the Genestealers this go around is a Broodlord that will instantly replace the old “Pavorati” model.

The Marines are some of the most beautifully sculpted and posed miniatures I have ever seen come out of Games Workshop. The detail on these models will draw you in and enchant you with their jaw-dropping detail. My favorite embelishments are the small chalice icon hanging from the power cable on the Thunder Hammer Sergeant and the Terminator ripping up a floor plate! Every single Terminator is unique and full of character. Two full colour books detail the fast paced rules, 13 missions that will give you days worth of exciting gaming. There are a few pages of detailing Space Hulks and Tyranids, and names and fluff for every Marine in the game.

The 64 full colour board tiles and doors are printed on very thick and sturdy cardboard, and they even have some areas of raised relief that gives the art more of a 3D look. Games Workshop has perhaps taken a glance at some of Fantasy Flight Games recent board game efforts, because the construction quality and art direction is top notch. Just the fact that the reverse side of the tile ALSO has a nice glossy coating, instead of just bare cardboard, means they put lots of effort into the small details. Toss in over 100 counters, nice bone coloured dice, 3 new objective markers, the infamous sand timer, and you have a boxed game that is overflowing with quality content.

Game play has not changed much from its original incarnation, but I will go over it for those who have only heard the legends of day long corridor grinds. At every step, the Marine player is outnumbered by a wide margin. Add to this the limited amount of action points they have, the “blips” that wont stop flooding your auspex, and that sand timer counting down the very limited time you have to make your decisions (when it runs out, your turn ends immediately), and you start to appreciate the awesome challenge the Terminators face.

Games Workshop have included the Assault Cannon and the Librarian from the Deathwing expansion into this base set to make it a more complete experience. Now you can bring to bear all your favorite tools of the Emperor’s Judgment. The awesome Assault Cannon can spit death down long corridors opening a path or covering your rear. It is also the weapon you will want to use against the hard to kill Broodlord, as the Broodlord is immune to the effects of the Heavy Flamer!

The Librarian has three force powers that do everything from give you an extra command point to use, put up a barrier that cannot be crossed or shot across, and even destroy blips or Genestealers out of line of sight! He can also use his pool of 20 Psi points to boost his Force Axe in assault to cut his way through the Tyranid menace! Its a much cleaner and faster design that the intricate card-based system used by Librarians in the 1st edition expansion.

With all this going for the Marines, you would think the Tyranids wouldn’t have a chance! You would be wrong. VERY wrong. Every turn, the Genestealer places between 1 and 3 blips on an access point and has them skitter down the metal catacombs hunting for you. Each blip is between 1 and 3 Genestealers, which means that a room or a corridor with a couple of blips could suddenly be packed with claws and death!

The rules are so fast paced and simple that I have explained them to people in 10 minutes and had them playing action packed games for hours! The level of difficulty is not a deterrent to players, it was actually a point of excitement and pride! Every step closer to the objective, every bolter shell fired, every explosion of ichor and claws is something to be celebrated and cheered for veterans and new players alike.

My first exposure to this game was when I was in middle school. I went to the only game store in town at the time and saw some guys playing this big board game with awesomely painted miniatures, and as I lurked to the side I was entranced with the spectacle unfolding before me. The day I got this box, I had that same feeling of wonder as I unpacked every sprue and card. We played this at BoLScon, and it always drew a crowd when we cheered the awesome exploits of the Marines. This is definitely a game that puts the focus on the Marine player, with the Genestealer player acting more like a Game Master.

I only have one minor issue with the game: The level of difficulty in the game. I think I had the nostalgia glasses on too long, because I forgot how draining it was to PLAY this game! GW could have found a happy medium between 1st edition rules and some of the tweaks in 2nd edition that people say made the game too easy. Instead they chose to give us unadulterated 1st Edition, where the road is hard, but the fruits of victory are even sweeter.

The price is high, but is inline with other “deluxe big-box” games we have seen of late coming from outfits like FFG, and this is without question a top-quality GW effort.