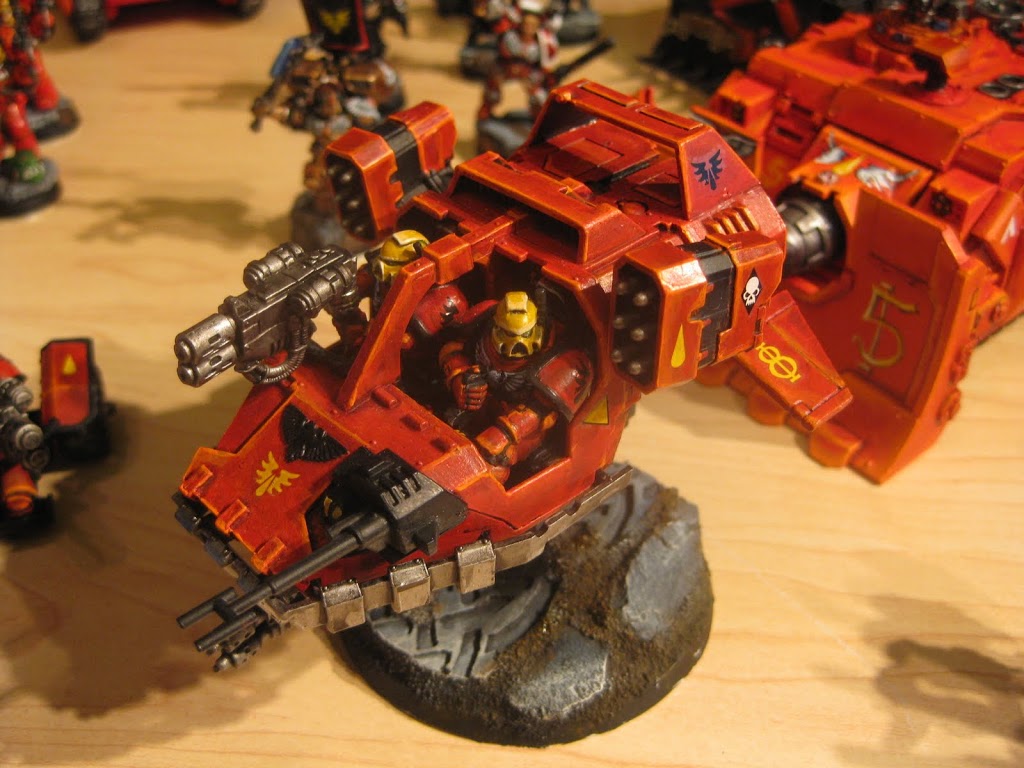 I wanted to share and rephrase a great discussion from my Warhammer Blog.

I was giving a reader some advice on his list, and this sort of popped up, and some great points were made. What are the pros and cons of Speeders vs Attack Bikes? Which is better? Which is better for you? Hopefully I can lend some illumination on this quandry wrapped around a pig in a blanket.

So, the discussion popped up when I encouraged a reader to drop his Multi Melta speeder for attack bikes. For reference purposes, a Blood Angels attack bike with Multi Melta and TL Bolter costs 50 points, and a BA Speeder with MM and Heavy Flamer costs 75. Doing the math quickly, for 300 points you can get 6 attack bikes or 4 speeders.

I will save you the arguments, you can read that on my blog. Here I will focus on the pros and cons that were brought up in the discussion, and you can decide for yourselves!

The bike can move 12″ and still fire both of its weapons. If it gets into rapid fire range, it can still move 12″ and rapid fire two Twin Linked shots. After that, it can assault if the option exists. More on that in a bit.

The bike can turbo boost, up to 24″ and get nice cover save.

It’s obvious strengths are in tank killing. It can turbo boost across a table and hide behind terrain. Next turn it can move 12″, pop a transport, then assault the guys inside if in range. (Not necessarily suggested, but still an option.) In case you don’t know, Multi Meltas get 2d6 added to their Strength of 8 for armor pen at up to 12″ away. This gives the Attack Bike a 24″ threat bubble to give credit to Goat Boy. 🙂 And it is a 36″ range if you are satisfied with just the Strength 8 +1d6 shot. Further in case you didn’t know, MM get a +1 on the damage chart making them boss for tank popping.

All of this means that in an attack bike you have a superb anti-tank unit that has much more range then you would think at first glance. It has one glaring weakness and one huge advantage.

First of all, it’s biggest weakness is that it is marines on a bike. It can be killed by any gun in the game just like any other marine. If you roll over any terrain whatsoever you have to make a Dangerous Terrain test… roll a 1 and take a wound. Any one with 1 rolling curse can appreciate the suckiness of that. Attack Bikes despite their toughness 5 are a fragile unit.

Their big advantage? They are compact little packages of death. You can hide them completely behind the Space Marine Rhino chassis. Some times your opponents even forget they are there! How is this a great thing? Obviously it is nice to have a melta in a pocket that your opponent cannot shoot. It can advance behind your tank or transport and pop out when the time is right. You can advance your Land Raider, unload your terminators, move up the bike, pop an enemy LR, then assault the survivors with your boys. When used in tandem with a bad-news combo like that, Attack Bikes excel.

What else is good about bikes? Their ability to turbo boost, collecting a cover save, and contest objectives is nice. Though being just infantry on a bike they cannot tank shock, so you have to get lucky.

I spoke about their ability to assault. Never forget! In my previous example, you can get your terminators into grips with the guys inside the transport the bike just popped. Often times when a weak tank popping unit does it’s job, it is left in the open for whatever fire power may come it’s way… but not so with the bike. You can pile them into the same assault. Maybe keeping them safe throughout your opponent’s shooting and freeing them up on his assault, or at the least getting them 6 more inches of movement after they shoot, then a massacre roll to get behind cover again. One step further, you can use them as road block units. Toughness 5 makes them hard to kill in CC, You can throw them into assault for a turn to slow down an enemy until your hard hitters can help, or, use them as assault bait to protect your valuable tanks. Leave them in range for your enemy to assault, but far enough away from your tanks so they cant reach them too, and what commander will pass up a juicy morsel like that? Especially if you just whacked two of his tanks with em.

Here is something you would not normally consider for an attack bike. If you have 3 squads of two, that is 6 bikes. 6 Multi Meltas and 12 twin linked bolter shots. (within 12″) Thats right! Anti Infantry. Sure bikes usually have better things to shoot then squads of troops. But what if they have no armor? Ork Horde? Templar Crusades? Nids? Necrons? Some guys would say you invested 300 points into units who are now much less effective. Forget that! Line up those bikes and mow down advancing troops. Slaughter Nid Zilla. Take down those Librarians teleporting nasty hammer squads around. Snipe enemy commanders left 3″ away from a squad. Oh the potential! You heard it, Attack Bikes with Multi Meltas are not just anti tank. They are universal!

SO, Mobility, fire power, assault option and most of all, the ability to hide makes an Attack Bike an excellent option for a Tank Killing unit.

A Land speeder is a vehicle with armor 10. This instantly makes it stand out over a bike. Str 4 weapons can only glance it. Like a bike, they can turbo boost 24″ and pick up a sweet cover save. Unlike a bike, they can travel over terrain and not suffer a Dangerous Terrain test however. This makes them more mobile, especially since they can travel over Impassable Terrain and a bike cannot. So on the mobility factor, speeders excel. But this is also a weakness. A speeder is limited to how far it can move and shoot it’s guns. It may move 6″ and fire every thing, move 12″ and fire one gun, or move over 12 and fire none. And of course, a speeder may not assault.

So Speeders are also superb tank killers. They have the same threat bubble as a bike. They can get +2d6 armor pen from 24″ away. Unlike bikes, they can pack a Heavy Flamer as well. Heavy Flamers are Strength 5 ap 4 templates that are the bane to any thing not in Power Armor or better and can lay down the law against horde armies. They definitely get the nod over the bike when it comes to anti infantry. However, they need to dangerously expose themselves in order to do that. You need to be really careful with how you use them.

Another sweet pro that Speeders have is that they can Deep Strike. This gives commanders yet another versatile option with how to use them. The ability to deep strike a speeder behind enemy lines and pop a tank that you can’t get to in a frontal assault cannot be taken for granted. Sadly, you rarely see deep striking speeders.

Like bikes, speeders have a unique advantage and a big disadvantage.

First of all, speeders are vehicles, skimmers in fact. You can use them to effectively block lines of attack. You can turbo boost them into the path of an advancing tank. It will get a 3+ cover save from shots, and he then has to go around you! If he tries to ram the speeder, you get a good chance of denying him the ram, and the advantage of stopping him in his tracks. Yes, speeders are nice for this. I have done it myself to protect my objectives from enemies trying to tank shock my boys off them. On a related note, they can turbo boost from behind your advancing tanks, and land in front of them, giving them an extra round of cover saves. (Credit to Alex from my blog for this one). So Speeders make a nice, and unexpected mobile wall of defense. You can move them from 2 feet away to grant cover saves, and stop advancing tanks from getting to you.

But they have a huge disadvantage. They cannot hide behind any thing except huge pieces of terrain. They are on flying bases and cannot hide behind a SM tank, even a Land Raider. Unlike Attack Bikes which can nestle themselves right up a tanks rear-end. This means that smart opponents will take the chance with Lascannons from across the table and try to pop those pesky speeders!

I don’t feel that they are any more survivable then bikes. Sure they have armor 10, but str 4 weapons can hurt them. That and the fact that they cannot hide at all makes them just as weak as bikes when it comes to getting shot.

So there you go. Speeders and bikes are both superb tank killers, that excel at multiple tertiary roles. Your job is to decide just what role they will fill in your army. How have they performed for you?

By the way, most of my editorials are written with the average player in mind. There are volumes written with the expert veteran in mind, but very little to help the noobies. So this is for you little guys! 🙂 Have at it. 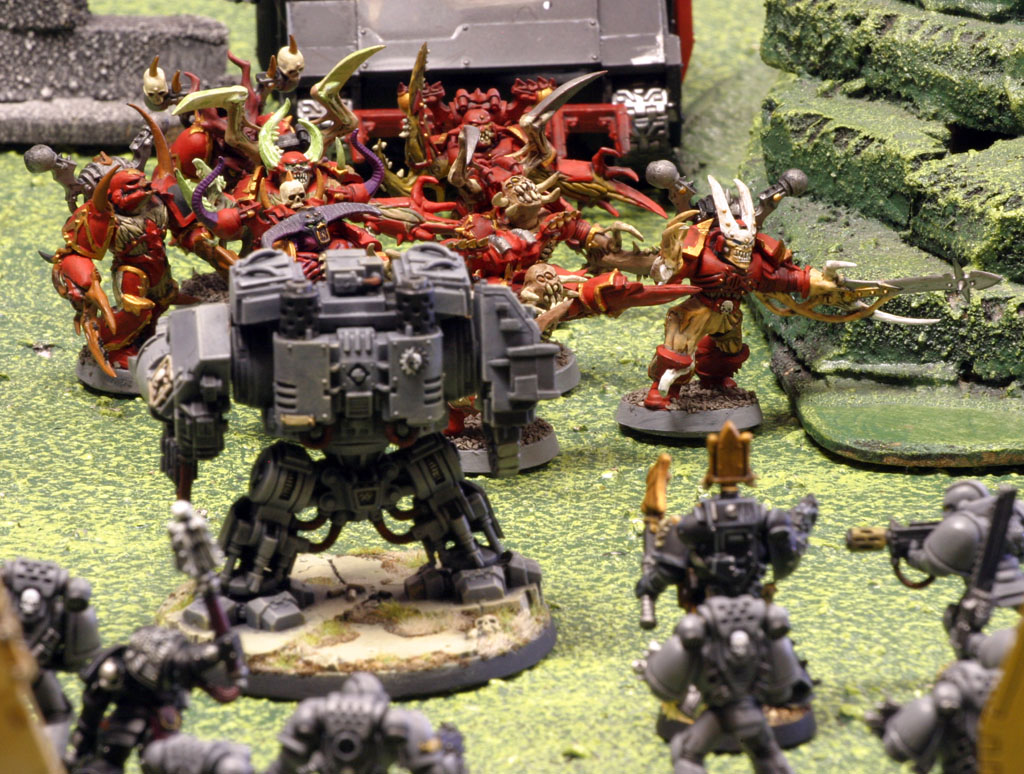