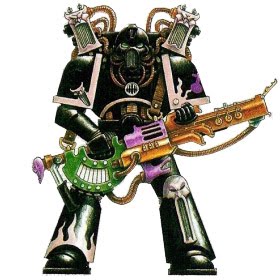 One of my favorite Warhamer 40k units are the Noise Marines from the Chaos Marines Codex. I know they are not the best unit in the book but I enjoy their background. Their overall point cost is a bit too high to make them truly competitive but I do find them useful in certain situations. The challenge of using them plus their overall fluff makes them a really interesting unit that will make for fun games.

Here are some different tactics you can try:

Flex-Mech
First, they are a great unit for hiding in a rhino. Their weapon’s ability to change its rate of fire from heavy to assault means that even when moving they are a serious threat with the Blast Master. They can pour out a lot of fire power into a squad and still keep a safe distance if need be. Since their guns are also assault weapons they can still be an assault threat with their increased initiative. This creates a potent and dangerously flexible mobile assault unit, that especially works with the mechanized armies you see now.

Flex-Foot
Secondly, you can use the unit as an actual viable foot slogging unit. Their weapon is always usable. Whether you are moving and pushing out a ton of fire or standing still and pouring bass notes into an oncoming horde, the Sonic-blaster is a pretty potent weapon. It is one of the few foot slogging unit that can carry a heavy weapon that is effective onthe move yet can still have chance to knock out armor with the Blastmaster. They can move forward, pour out some fire, and then hold an objective. Don’t forget about the pinning ability of the Blastmaster as well. Additionally, since they are Chaos Space Marines, they have grenades that allow them to strike first when charged due to their superior initiative.

Burninate and Assault
Third, I like to use them as a just a great scoring assault unit. Even if you don’t give them Blast Master, a squad equipped with a champion carrying a power weapon can put a lot hurt on any opposing unit with their great Initiative 5. If you have 8 Noise marines with 25 attacks going first is pretty great, especially when dealing with small elite units like TH/SS terminators. Mix this in with a fearless unit and you got something that can stick around for the long haul and keep an opponent locked down for a few turns. Mix this with a Doom Siren champion and you have a great cover flushing unit. Nothing is more frustrating than watching guys sit in 3+ cover as they laugh off your bullets. Watch as your super heavy flamer puts the serious hurt on those stuck-in guys and your opponent’s screams that it’s a AP:3 Flamer.

This unit can do a lot of different things that can help cover some of the holes you might have in your CSM army. You have what is for the most part a superior assault unit mixed with the ability to have one of the best weapons in the game but with at a high point cost. Beyond the actual effectiveness of the unit you also have one of the more fluff heavy choices in the book. The sheer modeling potential alone is well worth adding some heavy metal punks into your traitorous army.