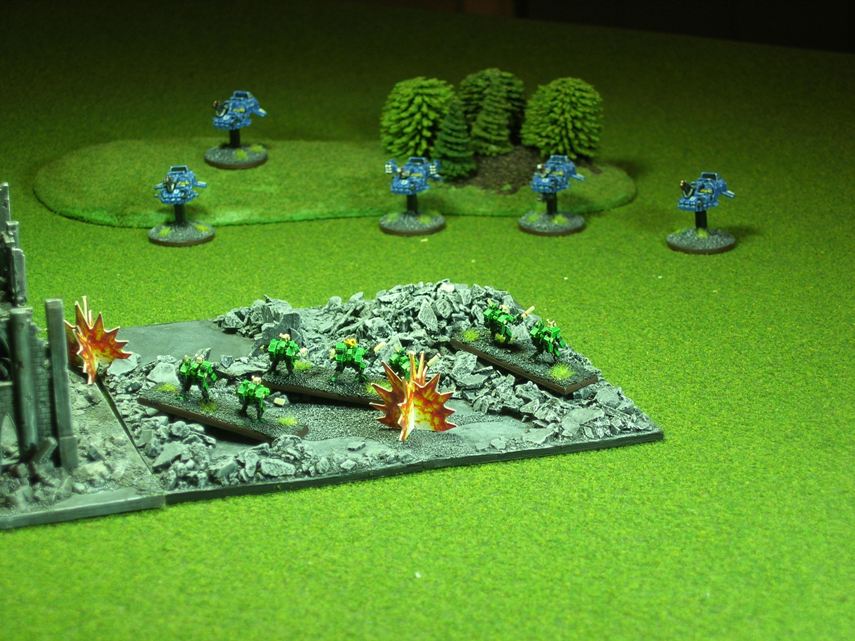 In a previous post, I described how to perform an air assault using Thunderhawks. In this post, we will look at how you might use detachments in tandem to break an enemy formation. For this example, we will use Assault and Land Speeder detachments.

The Setup
In the current turn, we move our Land Speeders to within 85cm of a target enemy formation that has already activated this turn (very important–we don’t want it running away from us, either intentionally or inadvertently). Later in the turn–preferably, the last activation for the turn, we move our Assault detachment to within 25-30cm of the same enemy formation (try to keep these Assault detachments free of blast markers, if you can, for a +2 advantage during assault resolution–more on this later).

These formations are now ready to pounce.

The Pounce
In the following turn, our high Strategy rating will hopefully win us the Strategy roll so that we can claim the first activation (if not, cross your fingers that your opponent doesn’t see what’s coming and move the target formation away). We retain the initiative (hope you remembered to bring your Supreme Commander along in case of a failed roll!) and give our Assault detachment an Engage order. We move the Assault formation so that we get as many Assault units into base-to-base contact with the enemy as we can. In the ensuing assault, our Assault marines are hitting on 3 or more, which is quite good (hopefully, we have targeted an enemy formation that is less skilled in close combat). When the round of assault is complete, and assuming neither side was wiped out completely during the assault, the Land Speeders get to contribute Supporting Fire using their 5+ Fire Fight value–in this way, you have effectively enabled your Land Speeders to impact the enemy twice in one turn.

Note: Sadly, this second volley of fire does not benefit from the macro weapon rule I mentioned earlier. In the case of Land Speeders, this applies only to shooting hits, not in firefights (which I, personally, think is laaame). Special thanks to Matt “Dobbsy” Dobbs for providing the images of his most excellent Ultramarines and Tau miniatures.

~If there are any tactical devices you would like to see explored in this series of Epic posts, please let me know in the BoLS Lounge’s Epic section.