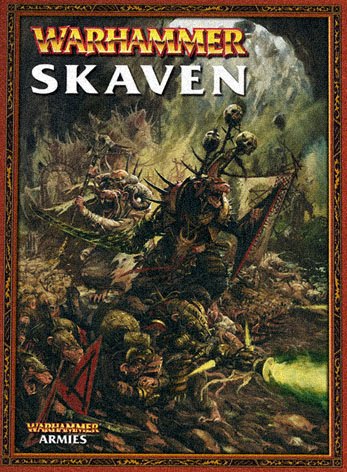 There are foul tidings on the fetid winds that emanate from Skavenblight: Chittering teeth in the darkness say:

The old Skaven book has the following CORE units:

Now, with the exception of Globadiers, all can be put in ranks and they are all core.

Rumoured mount options are:
Grey Seer – Screaming Bell
Plague Priest – Plague Furnace, Giant Rat
Warlord – Rat Ogre, Giant Rat, Litter/Throne of some type
Mounts are only for characters and Nurglitch will be used a lot both as a Warlord and a Plague priest.

Ikit Claw will be a spellcasting nightmare, and good in combat to boot. He will be able to use all the Skaven spells or any of the normal 8 lores.

Deathmaster does indeed have a dagger in his tail!

SiN is in.
+1″ flight remains.
Skaven may still decline challenges and use LD for the unit.
Life is Cheap is only for slaves.

Clanrats: 4 points.
Nightrunner: 7 points, no skirmish, one movement before the battle starts, two hand weapons and throwing stars included, LD:6 (9 with full ranks).
Stormvermin: 7 points with halberds and option for shields, S:3, 25 point magic items for the champion.
Rat swarms are non 0-1 and 25 pts each.

Rat Ogres: 40 points, plus 8 points for each handler. Frenzy, champion WS:4, A:4.
Master Moulder is a kind of unit champion with LD 6, no mixed units with Rat-ogres and giant rats.
Jezzails: S:6.
Gutter Runner: 6+ ward save.
Plague Monks: no poison.

Hellpit Abomination: is in and quite potent.
Plague Furnance: giant censor pushed by plague monks, impact hits and gas.
Warp-lightning Cannon: fires like a standard cannon with a 3″ template at the very end of the line, strength still random, no armor save, D6 wounds, crew doesnt have to flee, LD 7, @90 points

13 different spells, 6 for Warlocks, 6 for Plague priests.
D3 warpstone tokens for every mage at the start of the game.
Warp lightning does only d6 hits and 1 still hits the caster
Spell to stop fliers
Spell for -1 BS to all enemy shooting

“13th Spell”, casts on a 25+, cannot be augmented with bonus dice. Target unit suffers 3d6 wounds, no saves allowed. Any survivors are replaced with clanrats.

Plague Furnace is a mount for a plague lord/priest. It is said to works like a Cauldron of Blood, giving a bonus like poisoned attacks or frenzy to nearby units, whilst nearby Pestilens units gain either Hatred or possibly Stubborn. (conflicting info)

Plague Catapults are S:2, no armour save, 5″ template and the target unit must take a panic test if wounded.

Storm banner is like the old one except it runs out at 4+. Which I think is probably better than before.

~As usual, standard caveats apply to all of this. Have fun you Skaven lovers.