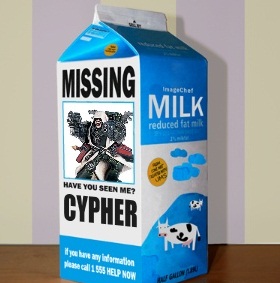 Welcome to part one of a Warhammer 40,000 special characters reclamation project that I call “Forgotten Heroes”! In this article, I’m updating three classic characters.

I’ve chosen three very cool but very different characters to update to 5th Edition for the inaugural article. First, the mysterious Cypher of the Fallen Angels. Secondly, the vile Foulspawn of Nurgle. And, finally, the noble Captain Invictus of the Ultramarines.

Without further delay, let’s jump into it!

CYPHER
Cypher is an enigmatic character, but here’s what we know about him. He’s a catalyst for death and destruction, although he rarely takes active role in the devastation. Cypher wears the unadorned black power armor of a Fallen Angel, and he carries a mysterious sheathed sword and two exquisite pistols. Cypher is so skilled that he can aim and fire both pistols, even in the heat of close combat. He has a seemingly supernatural ability to escape capture. Cypher is also sometimes accompanied by other Space Marines in similar black armor.

Note: Cypher is an Independent Character and may be taken as an Elite choice for Chaos Space Marine or Imperial Guard army.

Note: As long as Cypher is attached to the squad, the Fallen Angels benefit from Cypher’s And They Shall Know No Fear special rule. Also note that the Fallen Angel squad is a retinue (see the Warhammer 40,000 rulebook for details on retinues) and does not take up an additional slot in the Force Organization Chart.

Gunfighter: Cypher’s skill with his exquisite pistols are legendary. His shots wound on a 4+, regardless of the victim’s Toughness. Such is Cypher’s skill that wounds caused by his Shooting attacks are allocated by his controlling player, rather than the opposing player. His pair of pistols fire together as a single ranged weapon with the following profile:

In addition, Cypher continues to fight with his pistols in close combat. He counts counts as being armed with a power weapon and gains the +1 Attack bonus for being equipped with two close combat weapons.

Divine Protection: If Cypher is ever affected by an attack that would cause Instant Death or remove him from play, he only takes a single wound from the attack. If Cypher is reduced to 0 Wounds or would be removed as a casualty for any reason, don’t remove him from the battlefield — just place the model on its side to note his location.

At the beginning of his controlling player’s turn, roll a D6. On a 1, 2 or 3, Cypher is removed from play without a trace. On a 4+, he has cheated certain death again, scrambling into view of his attackers, bloodied but unbowed. Cypher is restored to 1 Wound and may be placed anywhere on the battlefield within 12″ of his current location. He can move and fight normally in the turn he reappears. Furthermore, in missions that use kill points, Cypher (and his squad of Fallen Angels) never concedes a kill point.

FOULSPAWN
Foulspawn was one of Nurgle’s most vile and diseased Champions. It is said that the mere sight of him was so disgusting that even the most stalwart warriors were unable to act against him due to uncontrollable gagging and wretching in disgust. Nurgle was so fond of the horrifying Foulspawn that he blessed him with Spawndom. Not only did Foulspawn survived the terrible process of becoming a Chaos Spawn, he thrived in his new state. By some quirk of fate (or whim of Nurgle) Foulspawn regenerates by absorbing the flesh of living creatures. He also gained the gift of a long, sticky tongue, which he uses to grab and swallow still-living creatures whole.

SPECIAL RULES
Mindless Hunger: Foulspawn must always move as far as he can toward an enemy unit, and he must always assault if an enemy unit is within range. In close combat, Foulspawn has D6 Rending attacks — roll every time he is about to attack. Foulspawn cannot contest an objective.

Toad-like Tongue: Foulspawn is gifted with a sticky, toad-like tongue which he uses to grab victims and suck them into his all-devouring maw. As a shooting attack, Foulspawn may select any infantry, jump infantry, beast, cavalry or bike model in line of sight and within 12″. The model must take a Strength test (see Characteristic Tests in the Warhammer 40,000 rulebook). If the model fails the test, it is swallowed whole and removed from play. If the test is successful, the model is moved into base contact with Foulspawn and Foulspawn counts as having charged in the subsequent Assault phase.

Absorb Bodily Tissue: Foulspawn gains +1W for each casualty he causes in close combat or using his Toad-like Tongue, up to a maximum of his normal Wounds characteristic.

Cloud of Flies: Foulspawn is surrounded by a thick cloud of stinging flies and counts as having defensive grenades.

CAPTAIN INVICTUS
Captain Invictus was the leader of the Ultramarines First Company during the tragic defense of the polar fortresses in the Battle of Macragge during the first Tyrannic War. The elite veterans of the First Company were pivotal in defending the planetary defense of Macragge long enough for Marneus Calgar and the Ultramarine fleet to achieve a victory over the Tyranids in deep space. When Captain Invictus’ body was discovered, it was noted that he was surrounded by a massive pile Tyranid corpses, twenty yards deep.

Note: Captain Invictus is an Independent Character and may be taken as an HQ choice for Space Marines army.

SPECIAL RULES
Plasma Blaster: The plasma blaster was a specially built combi-weapon crafted by the famed Artificer Putus in the 38th Millennium. It incorporated two plasma guns on a weapon mount suitable for replacing the storm bolter on a suit of Terminator armor. The plasma blaster uses the following profile:

Note: Also note that the Terminator Squad is a retinue (see the Warhammer 40,000 rulebook for details on retinues) and does not take up an additional slot in the Force Organization Chart.

First Company Veterans: Captain Invictus carefully expanded the Ultramarines First Company with stolid veterans from the entire Chapter after the heavy losses of the Corinthian Crusade. As a result, every member of the First Company is a seasoned veteran. An army led by Captain Invictus may select one of the following types of units to count as Troops selections for the army: Terminator Squads, Terminator Assault Squads, Sternguard Veterans or Vanguard Veterans.