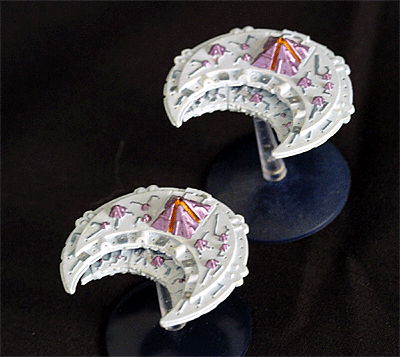 I plan for this post to be the first in a series of analysis of the various fleets in BFG. I want to start with Necrons for two reasons. Firstly, the Necrons are rated one of the strongest fleet in BFG. While most of us may not play BFG Necron ourselves, I do think it helps to understand how tough they can be so when we build our own fleet, we will continue to keep them in mind. Secondly, I am helping a friend start a Necron fleet and thus I have to apply some thoughts and focus for my recommendations.

Necron Fleet Basics
Firstly, lets look at what the Necrons can do in the movement phase. They are a particularly fast fleet, their cruisers have 30 cm movements and their escorts move 40-50 cm. Their battleship though only move 20 cm, which is pretty average. Another aspect of their speed is where the standard All Ahead Full (AAF) special movement order generates an additional 4D6 cm (4-24 cm) in movements with no turns allowed, Necrons ‘ AAF is D6 x10 cm (10-60 cm) and a turned is allowed every 20 cm moved. For Necron players, their enhanced speed allow for faster closings and faster exits from the encounter. For playing against Necrons, this will necessitate concentrated shooting to inflict all the damage while you can.

In the shooting phase, all Necron attacks are particularly powerful, especially against the Eldar. Their batteries are called lightning arcs that always consider their targets as closing (the most favorable aspect compared to moving away and abeam). In addition, lightning arc attacks are not affected by the negative column shift modifier of Eldar holofields or Dark Eldar shadowfields. However, as it stands, no Necron ships has lightning arc with a range more than 30cm. The Necron lances are called gauss particle whips what can bypass shields on a to hit roll of 6. I think this sounds better than it actually works because most of us always fire our batteries before our lances, using batteries to take down shields prior to lances shooting. Holofields and shadowfields usually allow 2+ saves against lances but this is not allowed against gauss particle whip. Currently gauss particle whips are only available on capital ships with 45cm ranges. Necron main capital ships (Tombships and Scythes) are also armed with a unique weapon called the star pulse generator. With each star pulse generator all enemy ships and ordnance within 20 cm receive one hit against its facing armor (or 6 for ordnance) and once again, holofields and shadowfields offer no saves. Given these three weapons, Necron players should start with lightning arc batteries (when there are a minimal number of blast markers are in play to be negative modifiers), then the star pulse generator (not affected by blast markers but must roll against armor) , and then gauss particle whips (which only require a 4+ to hit and so best applied once shields are down).

Necron Fleet Special Rules
One other special weapon available only as an upgrade for the Necron Cairn tombship is the sepulchre. The sepulchre destroys each ordnance marker (not waves) within 20 cm on a 4+. The sepulchre can also force a leadership test of one enemy ship within 20 cm. If the leadership test is failed, that ship suffers a permanent -1 to its leadership value for the game and cannot go on any special order, including Brace For Impact (BFI), until the end of the ship owner’s next turn. For those facing against a Necron tombship, keep low leadership ships more than 20 cm away if possible or squadron them to maximize leadership values. In addition, since both the tombship and the line cruiser Scythe are also armed with the star pulse generator, ordnance attacks should only be conducted within attack range so as not to leave ordnance markers on the table to be attacked.

In the end phase, Necron ships armed with portals can make additional teleport attacks over the standard of 1 based on the number of portals they are armed with (3 for Tombships, 2 for Scythes and 1 for Jackal escorts). The teleport attack restrictions of 10 cm range and no functional defensive shields remain in play but the restriction that the target must have less remaining hull points than the attacker is waived (though Jackals can only attack ships with current hull points of 6 or less) Against enemy shooting, instead of shields Necron ships have saves, 4+ for tombships, 5+ for cruisers, and 6+ for escorts. In addition all Necron ships have an intrinsic all around armor of 6! Both of these make a Necron ship a very tough nut to crack. And if they have to go on Brace For Impact (BFI) their saves go to 2+ though this does reduce their armor to 4+. I have looked at this to determine whether it would be more effective to attack Necron ships with lances first, and then if they go on BFI and lower their armor to allow follow up batteries or ordnance attack to be more effective. It doesn’t, statistically the 2+ saves balances out the reduction in armor to 4+.

The Necrons uses a different critical hit table which make them a bit more at risk for weapon failures and permanent leadership loss. This might be exploited by assault boats attacks and bombardment cannons, typical of Space Marine attacks. Also worth noting is that there are no Necron ordnance whatsoever; no torpedoes and no attack crafts. Necrons will use both turrets and the star pulse generator defensively in lieu of ordnance for defense or offense.

Fleet Construction
When choosing any fleet, the first question is what is your main stay ship class, battleship, cruisers, or escorts. As previously alluded to, there are no Necron carriers. One Tombship battleship with a sepulchre is the same points as 2 Scythes. Though a Tombship has only 12 hits to the 2 Scythes 16 hits total, its 4+ saves compared to the Scythe’s 5+ saves make them fairly equivalent in durability. The Tombship can field more lighting arc batteries but 2 Scythes have more gauss particle whips and portals, and using 2 models will also extend the effective range and attacks of the star pulse generator. Given also that a Tombship can only be taken for each Scythe, it appears to me the Scythe is the mainstay of the Necron fleet.

The other Necron cruiser is a light cruiser with only 4 hits, lighting arc batteries and 1 turret making it a support vessel rather than a ship of the line. As a support vessel though it will grant the Necron player an additional +1 leadership (making the total modifier +2) for special order tests when there is an enemy ship on special order as well. Despite the 6+ armor the 6+ saves value for escorts make them the most vulnerable component of the Necron fleet. Of the two, the Jackal is the superior escort as you get more for the points: 200 points with 4 Jackal raiders get you 16 points of lightning arc batteries and a total of 8 teleport attacks that can be applied against ships with 6 hit points remaining compared to only 15 points of lightning arc batteries with 5 Dirge raiders. I don’t see the faster Dirges making up the difference in value when compared to the jackal raider.