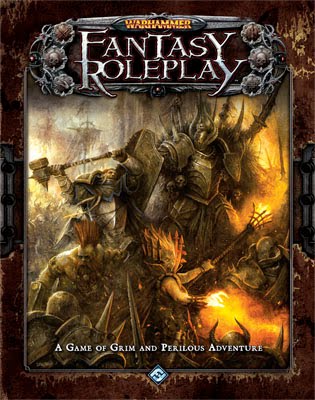 A guest review by: Dosadi

So WHFRP 3rd edition is upon us and I’d thought I’d take some time out from day write up a quick review of my first impressions of the game.

I’m not going to list off the contents as you can just visit FFG’s website and see what’s in the box. Needless to say, there is a lot of stuff to look at before you even crack the books open.

I’ll start with the rules. There has been a lot of discussion about how “dumbed down” 3rd edition were going to be; about how it was not a RPG but some sort of basterdised board game. I can say that after reading through the four books and playing the demo, WHFRP 3rd edition is as much of an RPG as you wish to make it. In fact I’d say the role playing elements are more supported by the new system than past versions were. The system is unique, innovative, and elegant. I’ve never seen mechanics for a game quite like this before. Again, there is already a ton of information on the FFG website giving details of how the mechanics work so I’m not going to go into it here. All I can say is that my gaming group who are for the most part jaded and bitter old men, turned into children on Christmas morning once they got their hands on the book. The way you assemble the dice pool can be a narrative experience in itself. As the GM I can paint a picture of the scene as I add Misfortune Dice or convert the players Characteristic Dice into Stance Dice. I really like the Stance meter; it’s a great way for a player to see at a glance where the character is at emotionally. This mechanic combined with the Fatigue and Stress mechanic give you a great overview of a characters physical and mental state and this again is a great aid in role playing.

One of the first things that jumped out at me was, as I was looking for how I can use my WHFB models in the game, I came across the Manoeuvres rules which are very abstract. At first I was little disappointed as I was hoping for a system where I could place and move models around to help illustrate an encounter. After reading through the rules I found that I liked the system for Abstract Measurements even better. Instead of having a grid or using a tape measure to move around it’s handled by using the Standees (or minis if you got ‘em. And who here don’t got ‘em?) and Tracking Tokens to show if Characters are engaged, close medium, long or extreme range from each other. It takes the expenditure of a Manoeuver (an action that does not require a roll) to move between range bands and if you push your character and take Fatigue you can move between multiple range bands in a single turn, but each Maneuver beyond the first gives you Fatigue. So moving from Close to Medium range is a single maneuver but moving from Medium to Long is two maneuvers and goes up exponentially from there. Maneuvers can also be used to do things like get off and on a horse, draw a weapon or interact with the environment in some way. Again, you can do more than one in your turn but will get tired fast and risk passing out from exhaustion. Overall I find the Manoeuvres mechanic very intuitive and straight forward and I actually like the abstraction as it once again supports creative role playing over concentrating on what tile you might be standing on in the dungeon. Combat is fast and furious. People have pointed out that they think it’s going to take too long to assemble the dice pool and work out all the modifiers. This is not the case. As I said above we actually turned the assembly of the dice pool into a role playing experience, each time I added or changed a die I explained to the payer why it was being done and what the repercussions of their choice of Action meant. It’s then all handled in a single role of the dice. No need to oppose the check with a role of my own or consult a chart. That’s been taken into account by adding Difficulty and Misfortune dice to the player’s pool. Check the results with the Action card being used it instantly tells us the result. So figuring out if an attack hit and how much damage and how severe that dame was is all handled in a single drop of the dice pool. Any extra effects will also be described on the card such as allowing the acting player to perform a free Manoeuver if they did particularly well or even allowing the enemy to take a free Action. One can assume that even though the attack was a success, the character overstepped and exposed themselves to a quick counter attack. If acting in the Reckless Stance there is a chance that the character exerted themselves a little too much and so would receive a number of fatigue tokens to represent them getting tired. Again, it’s very intuitive and supports descriptive role playing over the basic hit or miss.

Anyone who thought they were going to tone down the horror and gritty darkness of the Warhammer World for this game was dead wrong. There is an entire deck of cards dedicated to making your characters go insane! Critical Wounds are very real and very common and you are not going to recover from them by sleeping.

The Background section is fairly thorough although Empire –centric and even someone with no familiarity with the Warhammer world will have an idea of what it’s like to live in the Empire. There isn’t much beyond Reikland that gets anything more than a passing mention however and you can tell that there will be supplements to cover the other parts of the Old World.

On the subject of Supplements it very obvious that the box set is just skimming the surface of the potential of this game. Despite all the content in the box it still feels as if it’s not quite complete. That is really the only criticism that I can level at the game; there just isn’t enough of it in the box to slake my thirst. Not enough careers, not enough Action Cards, not enough enemies, not enough… I can foresee FFG releasing all sorts of supplemental products from new decks of Cards to a full-fledged Magic set with the ability to play all sorts of magic users beyond the three colleges covered in the main set (Grey, Celestial and Bright). Heretic warlocks anyone? Future sets to cover other regions from the Chaos Wastes to the Bretonnia each adding new Careers and baddies to fight is a no brainer. Who doesn’t want to play a party of Chaos worshipping scum stalking the Empire in search of forbidden knowledge and arcane items?

I’m looking forward to getting my hands on the Adventurer’s Tool Kit as even with all the goodies you get in the main box it feels like they were holding back a lot of content. Also, while the main box says it has enough stuff for three players and GM, you can have more players if players are willing the share, I’m looking at running a campaign with four PCs and I don’t weant to be resource short. Heck, I’m thinking of buying a second copy of the main game when it’s released.

Warhammer was never about Monty Haul style gaming and the lack of “magic” items or rewards of that sort in the game continue that trend. There is a single magic item in the box in the form of a card and that is tied to the introductory adventure in the back of the GM book. It at least gives you an idea of what to expect from any adventure supplements they put out. It wouldn’t be hard for a GM to come up with their own magic items, but FFG could very well just put out a deck of magic item cards covering the various races. Say the “Elven Deck” or “Dwarf Runic Item Deck” or the “Heirlooms of the Empire”. The card mechanic gives them a whole lot of flexibility. I’m sure this will all trickle out over time in various forms. FFG needs to turn a profit on their investment and pay GW for that License, so I can’t fault them for wanted to release as much extra content as the market will support. I’m a sucker for things in shrink wrap so I personally don’t really feel that this all that bad a thing. What else am I going to do with my money? Start another 40k army? It’s not going to stop people from complaining that FFG is trying to suck money out of them by releasing all sorts of supplements and extra cards and dice. But then it wouldn’t be Warhammer if people weren’t complaining about cost. We’ve chosen a luxury here people, and now you want to whine about how much your luxury costs you? I digress…

Overall I’m very impressed by the game. FFG is known for high quality products and WHFRP 3rd continues that tradition. There was a lot of skepticism leading up to the release and I hope people will be able to see past that. They could have just updated 2nd Edition, but I don’t think that would have done the source material justice. See, way back in the day when WHFRP 1st edition came out it was seen an innovation of the RPG. It took D&D and its antiquated THAC0 and replaced it with a Percentile system that, for its time was seen as a unique and elegant mechanic. It took the dungeon crawl and turned it into the gritty adventure in a perilous world. It took the PC party out of the wilderness and stuck it into a cesspool of a city (it was a very urban fantasy game). It took player characters and drove them insane, or cut deep gashes in their flesh, or popped their eyeballs out or hobbled them permanently. It felt real and it felt refreshing and new.

WHFRP 2nd was an evolution of 1st; taking much of what existed and expanding upon it with the ever growing Warhammer background. It didn’t change much and while it was great product (with a great lineage) it wasn’t as innovative or industry rattling as its predecessor had been. WHFRP 3rd Edition is too the RPG industry of the 2000’s what WHFRP 1st Edition was to the RPG industry of the 80’s. A much needed revolution of the gaming experience to shake up the status quo. I sincerely hope it is a success as it deserves it. Kudo’s to the game developers and play testers who have managed to create something that should, if given the chance, evolve the RPG zeitgeist. In my opinion, this is way all future RPG should be made. I haven’t seriously played an RPG in almost a decade. WHFRP 3rd edition has me dusting off my GM hat and plotting my PC’s demise. I’ve already got the first adventure mapped out and I’m beginning to look at the bigger picture of the campaign I want to tell.

A few years ago, someone told me that Pen and Paper RPGs were dead. Well, they were right, in a way….