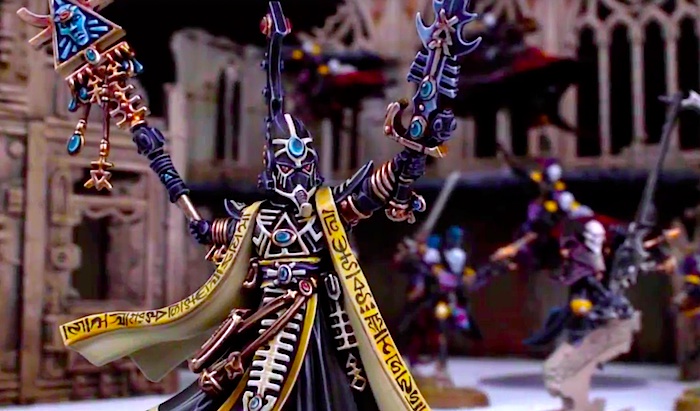 Fritz here, and as the self-appointed Saim-Hann representative at BoLS I wanted to throw in my two cents on BigRed’s excellent “Place of the Eldar” article from last week.

More then just a wish list article, it really personally got me thinking about how my warhost has evolved, and how it is going to have to evolve till the waiting game for a new Eldar ‘dex is over- and boy is that going to be a long wait!

5th edition in the 41st millennium is a crazy place these days and so many long held and sacred traditions have been overturned. Take plasma and melta guns for example…

Revered as holy artifacts with great honor, only a dozen or so are held by each Space Marine chapter, and to carry one into battle is the greatest of honor for a battle brother. Yet we have the 5th edition IG codex where apparently they are being handed out like candy to every front line trooper. Forget the lasgun, melta and plasma all around for everybody!

Also, what does it say when the Space Wolves are more powerful psykers then the Eldar? Uhmmm…didn’t Russ have a little issue with Magnus over the whole librarian/sorcerer thingy that lead to the burning of Prospero? Ironic that ‘Wolves are the new bad boys of the warp…

Stuff like this has me rethinking the role of psychic powers in my Eldar army. It is pretty bad now, but how much worse is it going to get with Tyranids, and the upcoming Black Templar codex? Black Templar: “We don’t like psyker xeno witches, so all your powers just don’t work on us! Die!”

Take my seer council as an example. They need psyker support to make the magic happen, fortune to keep them alive, and doom to boost the killy output of the destructor spam. What happens if their powers get shut down? I’m left with a 600+ plus fragile unit of jetbikes that go down like Space Marines which everybody is tooled up to kill as the benchmark of the game.

What about my farseer sitting in the wave serpent guiding my vyper squadrons to negate the ho hum BS of hitting on a 4+. In a way, if I can’t get those powers off, my vyper have gotten even more expensive as I’ve got to add a few more to try and match the fire output from the guided unit.

Are we going to get to a point where farseers go the way of swooping hawks and phoenix lords? I think we are almost there, and I’m planning for that day since it will come to pass before a new codex.

In many ways I see the Autarch making a comeback and the shift over to warlock spam to bypass psychic tests and every new army’s ability to nullify it no matter the build. Including an autarch opens up some interesting wargear, but more important from my perspective is the fact that she increases your reserve rolls by +1. Mass reserves are now a little more reliable, opening up a second turn alpha strike on your opponent. With the points saved on farseers and seer councils perhaps we are going to see a warlocks as the standard upgrade for each guardian squad? Another plus is that I won’t have to listen to guys complaining about how overpowered and cheaty a council is…

Oh, and BigRed, here is my wish list- bring back crystal targeting matrixes, restore star cannons to their former glory, and give me my Codex: Harlequins!

~Fellow Eldar players, if your Farseer/psyker support was now 100% nullified what changes would you make? For you non-eldar players how are you dealing with the steady erosion of your psychic abilities at the hands of the newer codices?