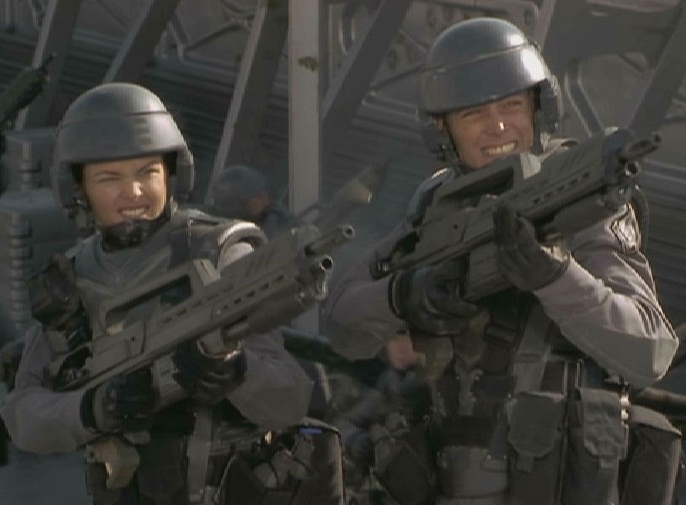 I spent a large portion of the weekend organizing my giant collection of Warhammer-related “stuff”, including an impressive run of White Dwarf magazines. My original goal was to track down some interesting source material for my Rogue Trader campaign, but I came across a giant pile of classic articles just begging for an update to 5th Edition.

I’m going to start off with something FUN for my BoLS Holiday Week article, so without further delay I bring you (booming movie preview guy voice) Movie Marines in 5E!

In January of 2005, White Dwarf published a spectacular 300th issue that included an over-the-top army list called “Space Marines in the Movies”. These unofficial rules were designed to represent our favorite Space Marines as action movie heroes. It was a tongue-in-cheek article, but I don’t think it would take a lot of work to make this a playable army list (Note: I’m revising my “not a lot of work” comment, lol — Mkerr from 24 hours in the future).

The army list represents a single Tactical Marine squad fighting off a much larger foe. The army list is designed for 1,500 point games, but you can build armies up to around 1,900 points. If you try the army list at fewer or more thank 1,500 points, let me know how it worked.

1 SPACE MARINE SERGEANT……………………………………200 Points
“The movie army is led by a tough, grizzled Veteran Sergeant, leading in a resolute and uncompromising fashion. He is also a lethal man in a fight and more than eager to give Johnny Xenos a sound thrashing.”

SPECIAL RULES
Listen Up, Maggots: The Sergeant often finds himself as the last surviving leader in the chain of command. He maintains discipline with constant vigilance and a sharp tongue. All Space Marines with line of sight to the Sergeant may re-roll failed Morale check and Pinning tests.

Note: All Movie Marine armies are led by a single Sergeant. That’s what the “1” in the “1 Space Marine Sergeant” means.

0-1 SPACE MARINE VETERAN (THE “DUDE”) ………………………………….150 Points
“The Dude gets the especially cool lines and designer purity seals. If there was ever a female lead in a Space Marine movie, then the Dude would be the one who rescues her all the time. The actor playing the Dude is the reason your girlfriend might go with you, without you having to waste a good painting day shopping for shoes with her in compensation.”

Options:
The Veteran may be equipped with Special Issue Ammunition for +50 points.

SPECIAL RULES
Second in Command: The Veteran is the nominal leader of “Demi-squad 2″ but will overcome his moody selfishness to lead the squad if the Sergeant falls in battle. If the Sergeant has been removed as a casualty, all Space Marines within 12” of the Veteran may re-roll failed Morale check and Pinning tests.

Note: I’ve deviated a bit from the article here. Instead of 0-6 Space Marines, I’ve divided the Troops section into two “demi-squads”, which I think better fits the background of Space Marines. A Movie Marine army list must include one of each of the below demi-squads.

“This listing represents typical Space Marines — if you call 7′ tall, genetically engineered, psychologically conditioned killing machines typical. They digest poison, spit acid, and can survive in a vaccuum. Would you want to tangle with them?”

Demi-squad 2 is usually equipped with a heavy weapon and deals with hard targets, while Demi-squad 1 contains the command and assault elements of the unit.

Note: A Movie Marine army may only take a single heavy support choice.

Special Rules:
Repair: Instead of shooting its storm bolter, a Rhino may automatically repair an Immobilized result. Force of One: Space Marines generally work in squads, but individual models may move out of unit coherency and may operate independently. The concept of unit is fluid to the battle-hardened Space Marine. As long as a Space Marine is within 4″ of another Space Marine they are considered to be part of the same unit. Additionally, multiple Space Marine units can ride in the same transport, embarking and disembarking independently.

Note: Use the Force Organization chart to determine kill points for Annihilation missions. Each unit counts as two kill points and the entire unit must be removed to gain the points. For example, a Movie Marine army with a Sergeant, a Veteran, two Demi-squads and a Rhino count as 10 kill points.

Do You Want Some of This?: If a Space Marine is removed because of the No Retreat rule, then he will go crazy ape bonkers as he gets dragged down. He can fire either a bolter or bolt pistol at his enemies (make the attacks normally) or pull the pin on a Frag grenade (center the blast over the model) and take his foes with him. SPACE MARINE ARMORY
Auto-senses: Space Marines count as being equipped with an auspex and may re-roll the dice when determining sighting distance for Night Fight.

Chainsword: A Chainsword is a power weapon that allows the wielder to re-roll any failed roll to wound. Additionally, all close combat attacks gain the Rending quality.

Power Fist: A Power Fist is a Strength 10 two-handed power weapon that is difficult and cumbersome to use, so attacks with a Power Fist are always delivered at Initiative 4. Additionally, a Power Fist rolls +3D6 (rather than +D6) for armor penetration.

Krak Grenades: In addition to being used against a vehicle as normal grenades, Krak grenades can be used as a ranged weapon with the below profile. Krak grenades roll +2D6 (rather than +D6) for armor penetration.

Flamer: Select a target. If the target is in range, then every model in the target unit is automatically hit by the flamer (i.e., do not roll to hit and do not use the flamer template). Roll a D6 for each model. The flamer wounds on a 4+. Multi-wound models wounded by the flamer are covered with flaming promethium and must immediately make another save. If this save is passed, then the model puts out the flames. If the save is failed, the model takes another wound and must immediately make another save. This continues until the multi-wound model passes a save or is removed as a casualty.

Heavy Bolter: A Space Marine heavy bolter that rolls four or more 1s to hit jams. The shots are resolved normally but do not gain the benefit of the Rending special rule. The heavy bolter acts normally in the next shooting phase. Vehicle mounted heavy bolters never jam.

Missile Launcher: A Space Marine missile launcher may fire either Frag or Krak missiles using the below profile. The firer may use any combination of Frag and Krak missiles when the weapon is fired. Lascannon: Draw a 60″ line from the Lascannon. Line of sight is not required and terrain is ignored. Roll to hit the closest unit. If the shot misses, the beam goes wild and no more hits are generated. If it hits, then roll to wound normally and move to the next closest unit touched by the line and roll to hit. Continue along the line until the lascannon misses or all units have been hit. Wounds are allocated normally against the unit (e.g., you can’t snipe models with a Lascannon shot).

Okay, that was a ton of fun! This is a pretty big article (and very easy to playtest) so I expect a ton of feedback you guys getting in some games over the holidays! I’ll collect the feedback and update the list on www.chainfist.com in the next few weeks. I’m thinking the list needs a few more characters (e.g., the psycho, the sniper, the newbie, etc.)…

~I’d love your thoughts and feedback! If you actually give the army list a spin over the holiday, please let me know what happened. You can leave comments here or email me at [email protected]. 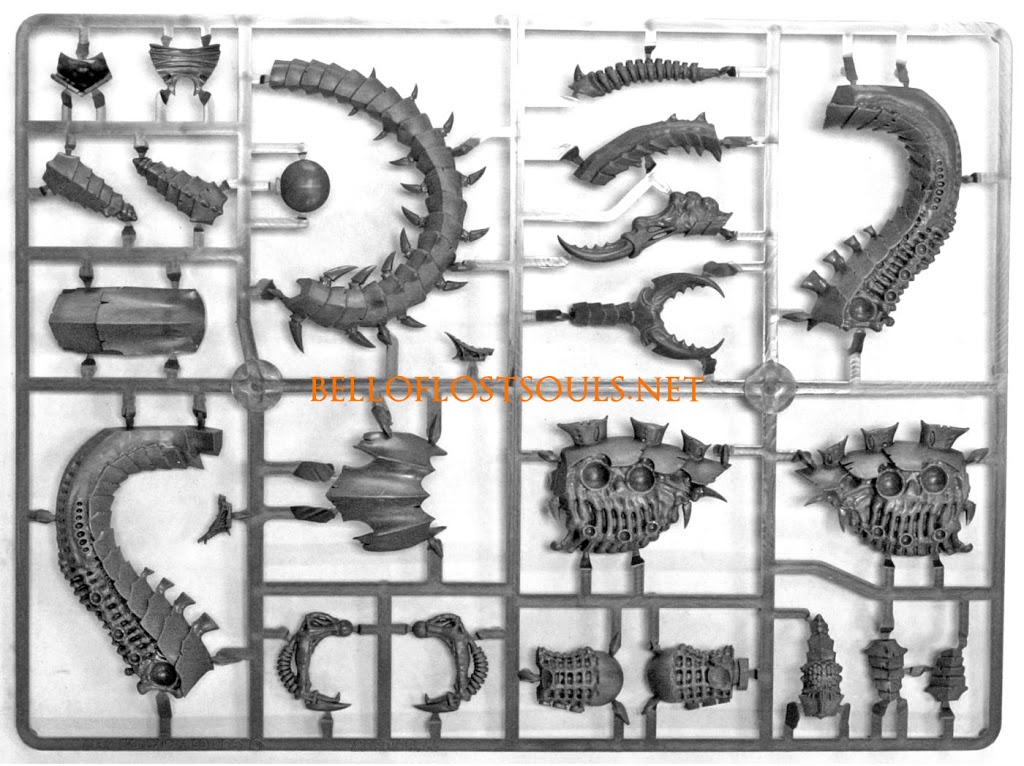