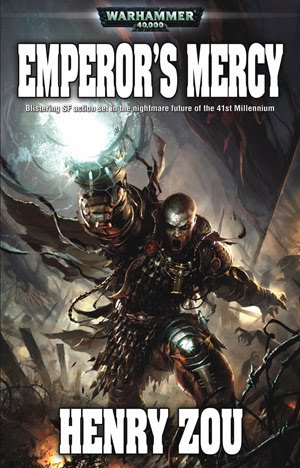 The best and worst of Black Library fiction, brought to you by Justin Hill.

It’s every wargamer’s dream: to win a Black Library short story competition, get a White Dwarf splash proclaiming you as the next best thing, and topping it off with a novel and a gritty quote from Dan Abnett (‘Crunchy, vivid and memorable…next time I need a galaxy burned I’m sending for Mr Zou’). So how does the ex Australian-soldier Zou square up to the hype?

Emperor’s Mercy is listed as a Bastion Wars novel: which means there’s probably three in the series, with an omnibus edition published later. The prologue finds us in Naga, far out on the Eastern Fringe, as a chaos invasion begins: with the enemy forces coming under the name of Ironclad – a mob of gun toting irregulars, with more in common with militias from places like Somalia and Afghanistan than the elite and terrifying Blood Pact.

The book starts very promisingly. Zou can certainly write, and the narrative shifts confidently from tea boy to Warmaster to confused Naga Air Defence Major, Major Chanta. There is a wide range of realistic details, such as a historian would use to humanise a story, such as excerpts from a dead soldier’s diary, military reports, and paintings made to commemorate the events long after everyone involved is dead.

Zou’s military background is apparent in the amount of detail and terminology and description, but with a heavy reliance on modern-style terminology of FPV’s, KL5 Scavenger-pattern light tanks, and 50mm guns; as well as people asking for ‘smokes’ and threatening each other with very contemporary sounding threats – some of these details serve to jar the sense of the 40K universe, which has been more deftly created by other authors with fething, lho-sticks, pict slates etc.

Zou’s hero is the inquisitor Obodiah Roth. We meet him as he finishes up a dull job investigating the governing administration of the Bastion Stars and is summoned to help out against the Ironclad. At two meters tall he is imposing, handsome, and brim-full of youthful confidence. Add to him the pretty and girlish Inquisitor Celaminé (complete with lip ring), just out of Inquisition school – throw them all into planetary destruction and trouble is bound to follow.

Zou has consciously given us a very different Inquisitor to Eisenhorn and Ravenor. Roth is much more an Imperial cog than a free spirit, working within the mechanics of the Imperium and the IG. Unfortunately – as he is the hero of the story – Roth quickly reveals himself to be the weakest part of it. His role and authority as sanctioned Inquisitor is thinly fleshed out – with none of the drama and scheming we see in surrounding fluff such as Hector Rex in the Imperial Armour volumes 5-7, the Siege of Vraks. Roth acts with the authority of a downtrodden police inspector, rather than the assurance of one of the Imperium’s most deadly instruments. Imperial Guardsmen attempt to arrest chief Inquisitors (has Zou read the IG FAQ where it talks about IG HQs trying to order Inquisitorial retinues?) and although the episode turns out badly for the guardsmen involved, it smacks of a writer thinly schooled in the 40K universe or desperate for a cliff-hanger.

As the book continues the story and the characters and the inevitable Black Library clever plots and sub-plots demand more than Zou can deliver. Trapped, wounded, about to be shot between the eyeballs – Roth begins to pass out more often than a Victorian heroine and having set up great battle scenes with his ‘historian’ narrator’s voice, when the narrative focuses in on Roth and his retinue the action and dialogue begin to seriously drag. The Ironclad no longer seem threatening; Roth is no longer interesting; and Celaminé’s wardrobe or pent up sexual energy is no longer worth comment.

In the end the book feels something akin to a teen version of a 40K novel, more Buffy the Inquisitor than Terminator, which might appeal to young readers, though it would seem to be a mistake to underestimate readers however young.

Zou does have talent, but these are early days and with a little less hype, and a few more books it will be interesting to see how he develops.

Justin Hill is a novelist, painter, wargamer, whose first White Dwarf was Issue #32. His Araby themed Dogs of War army was featured in the US White Dwarf, and the Ogres and Dogs of War Collector’s Book, and now he plays Dwarves, Bretonnians and Empire. The first of his Conquest Series, covering the events that led up to the Battle of Hastings, will be published in April 2011.