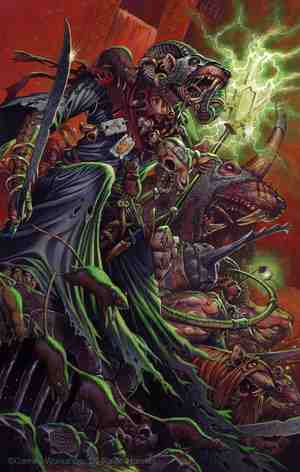 In part 1 I looked over the troop choices. In part 2 I reviewed the characters and mount options. Finally, we are into the trinkets and the blasty stuff. Skaven have a good selection of items. Like most books there are some obvious choices and some obviously bad choices. Here I will help you make your decisions a little bit easier. After taking a look at some of the equipment I will tell you how to get the best out of those nasty Skaven spells and which ones you will probably never cast.

Fellblade: Gimmicky weapon. Probably not going to be in a standard tourney build. Some of the Aussie guys were playing with the idea of it on a seer combined with the spell death frenzy. I would leave it at home. 0/10
Warpforged, Blade of Nurglitch, Weeping Blade: Strength 4 is not going to put many wounds on the enemy these days. 0/10
Warlock Augmented: This is a solid weapon. I particularly like it on a plague priest. 9/10
Blade of Corruption: Risk vs reward here. Great if you don’t roll 1’s. 8/10
DwarfBane: Decent option if your tired of the name sword of might. 7/10
Warpstone Stars: You have to take an assassin and its shorter range then the 6th ed version. It is ok ,but, will cost you big points to field it. Could be fun in combo with skitterleap. 5/10
DoomRocket: This is a great investment just for the potential pain it can bring. 10/10
Brass Orb +DeathGlobe: Potential is there. But, short range and artillery dice hate me. 5/10

Both the suits of armor are not worth noting. However, the shield is! Most of these -1 attack items let you choose 1 model. This works on everybody that attacks you.
Shield of Distraction: 10/10

Foul Pendant: Wardsaves are always good to bad its just a 5…10/10
ShadowMagnet: This could really help out keeping the furnace or bell alive. Also, great for a priest in a unit of censor bearers. 10/10
Rival Hide Talisman: GREAT, could save your grey seer on top of the bell 10/10

Warpstorm, Warpscroll are to expensive and situational for one use 0/10
Power stones are better then Warpstone!
Scrying Stone is interesting , but, not game changing , good for furnace priest 6/10

Skavenbrew: fun and random, keep it away from low model count units because d6 will add up 8/10
Skalm: Huge for a bell seer in my opinion. Maybe a warlord that didn’t buy other goodies.10/10
Pipes of Piebald: Better then causing fear!!! 10/10
Portents of VD: Situational and you have to be base to base. 4/10
Infernal Bomb: Useless 0/10
Smoke Bomb: If you take an assassin you should be taking the stars. 2/10
Warlock Optics: Good if you take the rifle. 7/10

STORM BANNER: This is really the only banner you should be looking at. 10/10

Remember that only plague monks, stormvermin, and the bsb can take magic banners. Fitting in more then the storm banner seems difficult to me when I am building a skaven list because of that limitation. If you do have a 2nd unit of storm or plague consider: Plague, Superiority, or Scurrying banners as decent selections.

The Dreaded Thirteenth: Unless you play like you got a pair, rolling 6+ powerdice is probably not in your game plan. This is a good defensive spell to have handy for when your opponent rolls 5-6 on the miscast table.
Skitterleap: Ace spell to cast early if you want to march block. Fun to set up a stars assassin or doomrocket warlock. Can a character out of trouble if he is on foot.
Warp Lightning: Consider a lv1 warlock just for this. It really is the only long range magic threat skaven have for big monsters.
Howling Warpgale: Great against ballistic skill gunlines. Keeping a big creature on the ground is always a plus!
Death Frenzy: Cast this on GIANT RATS. Its amazing! Usefull in late game when you don’t need all your ranks.
Scorch: Amazing RnF killer. It can easily trash a whole elf unit.
Cracks Call:Random range ,but, great for killing low initiative creatures. No look out sir from this spell that could give you game winning potential.
Pestilent Breath: It blows , but, gives a plague priest something to do when he is running towards the enemy or stuck in combat.
Bless with Filth: Poison is always fun, but, don’t expect this to draw dispel scrolls.
Wither: Best spell in the skaven arsenal. It combines great with censor gas and if you can get multiple off you can easily kill any unit in the game.
Vermintide: Useful vs elves and units hiding out of line of sight.
Cloud of Corruption: Dangerous to cast, would probably not cast this unless it could win the game or your not surrounded by anything, but , big ranked skaven.
Plague: Always good and great vs elves. Cast it out of hotek range unit and hope it bounces 12″ to the black guard. Can be hard for a priest to get off without a powerstone.

Wow, were done. Skaven troops, characters, mounts, spells, and items all broken down. Hit those top links if you missed the 1st or 2nd part. Any BoLS readers disagree? Did the Weeping Blade win your last game because you rolled a 6? The only spell you cast is the 13th? Stay tuned for my next article on Skaven where I will build a 2250 point army and a battle report. Jordan out!