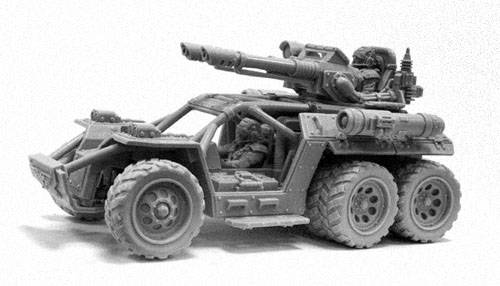 Hey everybody, Forgeworld just put up the Elysian buggy seen at Gamesday UK 2009.  You can preorder it here.  This guy will be part of the upcoming Imperial Armor:8

“New for the Elysians is the Tauros Venator, a six-wheeled rapid strike and scout vehicle. Light, fast and heavily armed, these all terrain attack vehicles are used for rapid reconnaissance and savage lightning raids in support of the drop troop landings. Designed by Will Hayes, with Elysian crewmen by Simon Egan, this full resin model comes with the choice to mount either a twin-linked multi-laser or twin-linked lascannon as well as optional hunter-killer missiles.”

These ship out the week of Janaury 25th.