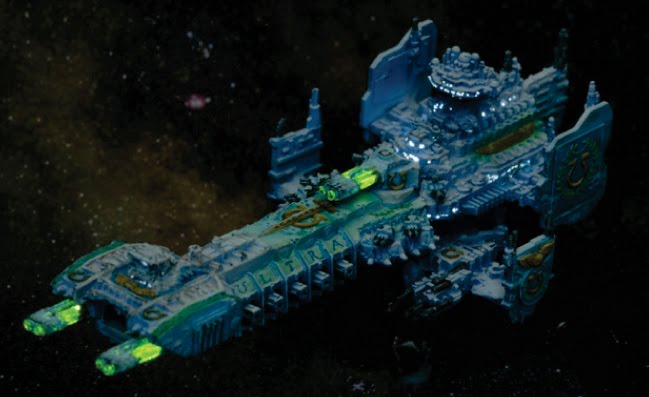 Background. In the fluff, the true power of the Space Marines lies within each individual marine as the epitome of a warrior. As such, a Space Marine force relies on the power of each marine working in conjunction with each other in close encounters. This theme is carried on in how Space Marine play in BFG. Strengths. The primary strength for the Space Marine fleet remains within the individual marine. In game terms SMs have a +2 bonus to boarding actions and +1 bonus to hit and run attacks. As a reminder, boarding action can be declared in the end phase when in base to base contact with an enemy ship. Base boarding values + a D6 are compared; higher totals win. Each point of difference between the two totals results in a hull damage for the loser. Space Marines get a bonus modifier of +2 to its total but then Orks and Chaos gets a +1, Dark Eldar gets a +1 in the first round (but a -1 in each subsequent rounds) and Tyranids gets to chose the higher of two D6 rolls rather than be limited to just one D6 roll. Given that these other fleets also receive some bonus for boarding, the Space marine bonus of +2 doesn’t really seem that significant. In addition, since part of the boarding total is based on the remaining damage points available added to its current turrets, Space Marines ship size must also be considered. The most numerous ships in a Space Marine fleet will be either strike cruisers with 6 hull damage points and 2 turrets or escorts. Compare this to most Chaos ships being cruisers with 8 hull damage points and 2 turrets, or  Ork cruisers with 10 hull damage points and 1 turret. Considering the ship size, the effectiveness of Space Marine in boarding appears essentially limited to boarding Imperial Navy and Ad Mech (both ally fleets), Corsair and Craftworld Eldars, Necron, and Tau.

On the other hand, the +1 bonus to hit and run attacks is tremendous. Hit and runs can be conducted by Space Marines in 3 forms. Firstly by thunderhawk gunships which are a cross between fighters and assault boats. Secondly by boarding torpedoes, which unlike regular torpedoes can make a 45 degree turn at the beginning of the ordnance phase and attack by hit and run rather than hull hits. Third and finally, Space Marines can make hit and run attack by teleport attacks. Teleport attacks are made by capital ships against enemy ships within 10 cm whose shields are down. Hit and run attacks is conducted with a D6 and checking against the Critical Hits table. Since the Critical Hits table spans from 2-12, most fleet fails on a roll of 1. Space Marines always inflict some damage. Against escorts, any critical damage means destruction; Space Marines can rapidly wipe out enemy escorts (except Eldar). Against capital ships at most 2 in 6 attacks will result in a hull point of damage but can be quite effective in crippling weapon functions.
Another manifestation of the power of a Space Marine fleet is the average ship or squadron leadership is 9 and a Marine “Admiral,” (the Master of the Fleet) has leadership of 10 for a measly 50 points. An additional strength of the Space Marine fleet is the armoring of their ships. Both Marine battleships (Battlebarge) and cruisers (Strike cruisers) are armor 6 all around. Space Marine capital ships also have a unique weapon in the form of bombardment cannons with left/front/right firing arcs. Bombardment cannons are battery weapons that always hit on 4+. However like batteries the number of attacks is modified using the battery Gunnery table. This means that the usual sequence of using batteries to take down shields first will reduce the effectiveness of subsequent bombardment cannons shooting while shooting with bombardment cannon first will make be more effective at taking down shields while losing its 4+ to hit advantage to inflict hull damage against armor 5+ and 6+ hull. The rules do not appear to allow a simultaneous shooting with both bombardment cannon and batteries using different colored dice.

Weaknesses. Given the focus on the individual marine warriors, space marine fleets sometimes feel particularly like a “one trick” fleet. Space Marines lack the variety of ships and variety of armaments that allows other fleet to be all around competitive. Pure Space Marine fleets do not have carriers of fighters or bombers, and lances. Space Marines also only have two capital ships to choose from, the Battlebarge and the Strike cruisers. While the Battlebarge maybe relatively comparable to most battleships in other fleets, the Strike cruiser doesn’t match up well against most cruisers. Thus the Space Marine fleet is better thought of as a system to deliver marines to attack rather than a fleet of warships for ship-to-ship slugfests.

Fleet Composition. Given that BFG is a naval game, Space Marine fleet should include a Battlebarge at the first opportunity. It is the only ship that can go toe to toe with enemy ships. Unfortunately there can only be one barge at up to a 1k points fleet and a second for up to 2k. The rest of the fleet will be made up of either Strike cruisers and or escorts. Given there are several escorts to choose from and only one Strike cruiser choice, let us look at the escorts first. Space Marines can choose from among 3 Space Marine specific escorts and upgrade the 3 Imperial Navy escorts to Space Marine standards. Firstly is the Hunter escort for 40 points armed with 2 points of torpedoes and 1 point of battery. While 2 points of torpedoes may not sound like much, they can also launch boarding torpedoes, which make them very much Space Marine delivery systems. Hunters are better than the 35 points Space Marine upgraded Cobras. For an extra five points you get 5+ armor instead of 4+ and 35 cm movement rather than 30 cm. The Space Marine Gladius for 45 points has 4 points of batteries but when compared to the Space Marine upgraded Sword for 40 points, the only return for the 5 points difference is a 5 cm extra movement. In my opinion this might give the Gladius an edge as Strike cruisers have a similar 30 cm movement as the Gladius while the Sword would be a slower 25 cm. As you might have guessed, the Space Marine Nova has a similar role as that of the Firestorm. However, for 5 points more it gains a 10 cm extra movement but loses one point of turrets. Among the 6 escorts, I believe the most worthwhile are the Hunters (much superior to the very useful Cobras for a small charge of 5 points). Strike cruisers are truly the quintessential Space Marine vessel with armor 6, fast and maneuverable, armed with both Thunderhawks and bombardment cannons. Model wise if you don’t like the looks of the Specialist Games striker cruiser, look at the Grey Knights strike cruiser from Forgeworld. Fleet Tactic. At 1k points, a Space Marine fleet should have one barge, 1 to 2 strike cruisers, and 3-8 escorts. The barge should hold off enemy capital ships with its 45 cm batteries while contributing to the fleet hit and run attacks with its own Thunderhawks and boarding torpedoes. Strike cruisers, like most light cruisers can be played as super escorts to support and protect the fleet, or used offensively in pairs. The Hunters should support Thunderhawks with their torpedoes. Defending ships must choose between directing their defensive turrets against attacking thunderhawks or boarding torpedoes but not both. While enemy escorts may be easily eliminated with hit and run attacks, these attacks may be better spent against enemy capital ships. The ability to take down a whole bank of weapons (dorsal vs starboard vs port vs prow) can really reduce a significant amount of offensive power of a capital ships, much more so than a destroyed escort in my opinion.

Closing Thoughts
In summary, a Space Marine fleet is all about hit and runs. If you are looking for more diversity, there are alternative list available. An Armageddon list allows a mix of SM and Imperial Navy. Another option is to use the Chaos 13th Black Crusade. This is the list that most if not all Chaos Space Marine players should be fielding but without the use of Marks of Chaos, it could represent a chapter who has retained their pre-heresy ships or even to represent a pre-heresy marine fleet. Chaos Space Marine also has the +2 bonus to board, +1 bonus to hit and run, as well as the availability of Thunderhawks. In truth, this may be preferable to a standard barge/strike cruiser Space Marine fleet. The 13th Black Legion list would give you more ship options as well as being cheaper to purchase.

~Fracas has been battling in the Imperium’s spacelines for years agasint threats xenos and domestic.  If you yearn for a tour of duty in the Imperial Navy cadet, look no farther his fantastic BFG blog: Warmancer