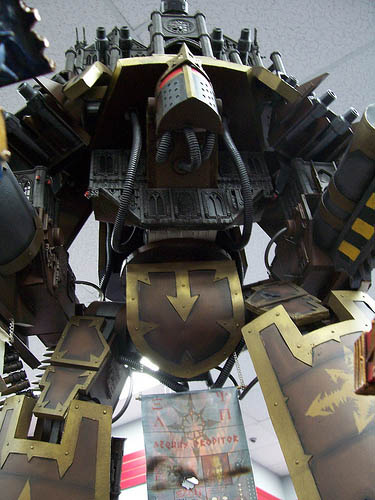 A 40k scale Emperor titan comes to life in Atlanta, in the words and pictures of its creators.  You won’t want to miss this!

The Basics by Kyle Amlung
This Titan was a dream for me for a long time. I’ve been playing 40k since right after 2nd edition came about, and I also delved into Epic and other 40k based games such as Necromunda and Blood Bowl. I always loved the concept of Titans, and picked up the Armorcast titans as soon as they were released back in the day, even though they were practically un-usable in a 40k game. I have always played Chaos, right from the very beginning, and anything that can destroy those Imperial corpse worshipping fools is what I like best!

The world’s first Warmaster Class Titan, (Chaos Imperator) came together through several lucky twists. I happened to be in Chicago on business, and stopped in to a GW store where multiple championship GD painter and converter Nathan Comanse hung out. He had built a wonderful looking Warlord Titan that looked just incredible. Next thing was next and I commissioned him to build an unpainted chaos version of a warlord titan, in a modernized version of the old epic beetleback style. He normally wouldn’t build a titan but luck was with me and he agreed.

This took the good man a couple of months of hard work and labor, but at last the project was complete. The next problem was transporting it back to the Savannah GA Area to be painted. The titan at that time stood just over 3 feet tall, and could break into 3 sections, the legs, torso, and carapace shell. My lovely fiance’ knows how unique this thing is, so she drove up from Atlanta in the SUV to visit me, and drove the thing back down to Savannah and dropped it off with my good friend Ian who would paint the model.

At this point, we decided If we’re gonna do it, let’s go to the extreme with this thing and make it an Emperor titan. We decided that it needed to be significantly different than the Imperial counterpart, and so I made a data sheet that put the titan in a more multi-role part than the Emperor by adding a defense laser and making the fortress and troop capacity smaller. I also put anti-flyer “cloudcover” autocannons on it.

Ian went to work converting it to be an Imperator. He spent countless hours upgrading the structure and adding a “cathedral” theme to the titan. The results were astounding and they are what you see in the pictures. I designed some banners in photoshop to complete the titan.

It played its first Apoc game at PHOENIX GAMES in Buford Ga (near Atlanta) and kicked some ass. It currently is residing at that store for a little while if anyone in that area wants to see it in person. Model Stats
The titan stands approximately 53″ tall from ground to rooftop of the cathedral. It weighs about 10-12 pounds, and can easily be picked up by a person, although it still separates into 3 pieces for transportation. The guns are over a foot from back to front. Almost everything on the titan was scratchbuilt by Abe and Ian using foamcore and plasticard, and other random household items. Construction by Ian Roy
Speaking of construction, MAN….that thing was a project and a half! I recieved the then-warlord titan December 18th and had to get the thing ready for action by the 30th of the following month! The warlord was well built but could still use those really cool details that would turn it from “Wow, cool titan!” to  “HOLY MOLY! LOOK AT THAT FRIGGIN’ TITAN!”. It was not built to accomodate the extra weight and pieces normally associated with Emperor class titans so I had to do a lot of conversion work. Reinforcing the structure, installing 3 MASSIVE magnets to hold the torso in place, saftey lines (just in case!), lots of extra guns, and of course…the cathedral.

The cathedral pieces were all built using the Pegasus hobbies Gothic terrain sets. They’re excellent for this project. Modular, plastic, highly detailed, easy to work with. Perfect. Getting a rigid up-down-left-right kit to fit to a curving, sloping carapace was a very difficult task indeed, however. So i built a “foundation” out of GW modular movement tray pieces. The orbital defense laser and the pier it juts out on were installed shortly thereafter. The Laser is made out of PVC and, believe it or not, a lawn sprinker!

More castle pieces were added to the backs of the legs, the torso and little mini-castle rooms were installed on the arms. These were put in place to carry the “walking cathedral” theme throughout the rest of the titan. If you look closely, you can see the traitor tech priests working away inside those mini castles, repairing the damaged weapons! No longer would we feel the sting of losing our primary weapons from a stray lascannon shot!

As Kyle mentioned, the guns are each about 12-16 inches in length. The titans left gun barrel is made from a Pringles can. You can fit a terminator, standing up, down the barrel! The vengence cannons bullets are massive, each one a good two inches long.

Painting it was a HUGE challenge. Its not really all that hard, per se…but its very time consuming. That, and you have to check it from EVERY angle to make sure you really did get into all the nooks and crannies. I used Basic brand acrylic paint and most of the painting was accomplished using an artist’s sponge and a stippling technique. Then, I went back and drew in the armor paneling by hand with a charcoal pencil. This was further shaded by applying charcol around those lines to fade the effect into the armour. The result was dramatic and made all the difference in the world. The castle was painted roughly the same way. Its amazing what you can do with a big ol’ sponge, a tube of paint and some charcoal! Ink washes, weathering and little details are all pretty standard stuff. But would I ever do it again? Oy-vey…

~Everybody, lets give these guys a hand.  You only see so many of these sized kits, and if there is something BoLS respects, its dedication to an insane dream, especially one pulled off so well!