FoW: Who are the Germans 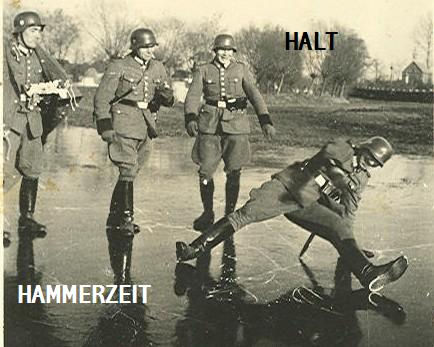 In Flames of War the Germans, more than any other county, have the best toys. Nearly every German list can be viewed as elite. They have the best trained troops, the best equipment and the best tanks. If you want to play a list where everything you have is a major threat, Germans are it. Be warned, however, that with that comes a heavy cost. Germans do not come cheap. The basic theme for the German player is “so many choices, never enough points.”

German units fall into three main divisions. Heer are the most common Germans. These guys are confident veteran. Waffen SS are fearless Veterans and are generally cost prohibitive for armor based lists. The Luftwffe are confident trained troops. These are basically airmen acting like infantry. Their lower price means you get to field a few more stands of troops. We can further break them down into company types, and decribe the lists that are available in the various campaign books.

Armored Companies– In general, you can’t go wrong with German armored lists. The Germans did a good job of keeping their tanks up to date throughout the war and they can stand toe to toe with most lists. Generally armored lists will be Stugs or Pzkw IV-H. Stugs are more anti armor and Pzkw IV-H is more anti Inf. 21st allows a Firefly to be added and some cool models for the revamped French vehicles. Stugkompanies are a different variation of Panzerkompanies. SS at FV make tanks more expensive, generally not worth Command getting a Panzer Ace Skill. Cobra and River of Heroes allow some variation for the standard SS list.

Heavy Armored Companies– Yes, they are cheap (dollar wise), yes, they are cool, but they are few in number and Infantry list will eat them up. Battlefront just released a PDF on their website for an official Elefant list.

Infantry Companies– Other than the Festungkompanie, you can’t go wrong with German Infantry. Grenadier list is the basic formation, so if you want to play a basic German list-this is it. Pioneers have less options but higher AT capabilities and some Fortifications. Sturm Co is Panzerfaust dream formation. Sperr co, Ersatzpioneer represent the stop gap forces on the eastern front. RV and CT respectively allows you more support. Festungkompanie is all about the Bunkers. Mechanized Companies– They are good quality lists, but I would rank them just under a pure infantry list because of their cost. These companies are generally infantry and have most support options but are generally the most expensive infantry.

Panzergrendiers – Most common of mobile infantry – These guys ride around in Trucks. Highly versatile and mostly forgiving. They can play with or without the transports. Monty’s Meatgrinder and Cobra allow for some bunker and fortification possibilities
Fortress Europe
Monty Meat grinder -21st PZGR
River of Heroes -SS PZGR
Cobra -SS PZGR Panzerspahwagon – Armored Cars. These lists are Fast, but brittle, not for beginners. SS upgrade can help with brittleness. They are lacking in high AT support
Online PDF
Viller Bocage
Monty Meat Grinders
Cobra

Germans also have (arguably) the best special rules. The Kampfgruppe rule allows you to take up to half of every squad and combine them into a new squad led by your second in command. For missions that dictate the number of units you must keep in reserve based on the total number of units, this allows you a “free” extra unit. It is also useful for combining heavy weapon teams from each unit into a single heavy weapon platoon. The Mission tactics special rule means that if your platoon commander dies, you can replace him with any other nearby unit. This is a great benefit. Most other armies get bogged down waiting for their CO or 2IC to go around nominating new platoon commander. The stormtrooper rule is probably the best of the lot. In the assault phase, if the platoon does not assault they get a free 4″ move if they pass a skill test. This basically lets your armor units pop out into the open, take a quick shot, then move back behind cover. Infantry units can cover ground nearly as fast as a tank and you gun teams can get their full rate of fire, then move 4 inches forward to get into better position. This is especially useful for heavy gun teams that normally only get to move 2″ a turn.

The Germans also have a few unit specific special rules. Infantry in a half-track are allowed to assault out of their vehicles. German Tiger tanks get the Tiger Aces skill. Basically, before the game begins they can roll on a chart to see what their skill is. A particularly lucky tank commander will get the Top Ace skill, granting a second Tiger Ace skill. It is bad day for your opponent when your Tiger gets increased rate of fire and reroll misses.

A special thanks to foxandrats for compiling the lists and initial review of the units.