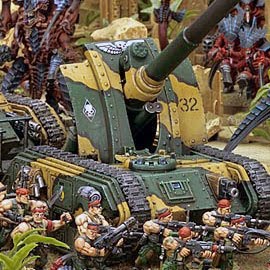 The release of the latest Imperial Guard codex opened up a wealth of heavy armour possibilities for all you ‘Treadheads’ out there. The Leman Russ variants took centre stage, but for me, it’s the artillery that really shine. Only one of these is available ‘off-the-shelf’ for now (although this may change), and it has recently received a minor revamp and reboxing, of course, this is the Basilisk.

A Note on Vehicle Squadrons

One of the key things about the codex is the ability to take 1-3 tanks as a squadron, taking up only one of those valuable heavy support slots. In general, the advantages of being a squadron are overshadowed by the disadvantages, and in no place is this better shown than in the case of the ordnance battery. Let’s look at a couple of reasons why I think you should think twice about using these big guns in a squadron:

So, I personally avoid the vehicle squadrons for artillery.

The mainstay of Imperial Guard artillery has an amazing range that is more at home on an Apocalypse battlefield than a ‘normal’ 40K game. However, its immediate disadvantage is its minimum range when firing indirectly. If you are planning on hiding your Basilisk, you have a huge ‘blind spot’ that a good opponent will capitalise on. The immediate way to minimise this is to deploy in the corner of the board. Look at the diagram below: Assuming you have only 1 basilisk (number 1), the area in yellow is totally unavailable for an indirect shot. That‘s approximately one third of a 6’x4’ battlefield. If you were to deploy in the middle of your deployment zone, this blind spot would almost cover the whole board.
In order to combat this, you have two general approaches. First, is obvious from the diagram, use two basilisks. This allows each basilisk to cover the other. There is still a wedge of a blind spot, but this is on part of the battlefield that most opponents would struggle to exploit. There are other downsides too, this method does prevent you concentrating your fire, and an enemy with a smaller force can just attack down one flank, causing one of the basilisks to have little to fire at.

The other thing to do is to forget indirect fire altogether and shoot directly. While this role is more suited to a Leman Russ, it does allow you to do something with an otherwise useless Basilisk, like shooting inside the minimum range, and modify the scatter with your BS3. The only advantage an Earthshaker has over a battle cannon is S9, and unless you are shooting vehicles, this rarely makes any difference. So, don’t plan to use your basilisk like this, for 25pts more you get a Leman Russ which is better in almost all cases, but it is an option if there’s nothing else better to do.

Firstly, all of this will seem really obvious to Imperial Guard veteran players (but then lobbing artillery shells into the opposing ranks is rarely subtle anyway), just see these as reminders of what you probably already know!

First, remember the Earthshaker is only AP3. I can think of a number of occasions when an opponent shot my Terminators with an Earthshaker or Battle cannon, wounded them all on 2s only for me to make all my saves. Don’t even try and shoot 2+ save troops unless there is nothing else available.
Unlike the Colossus mortar, the Earthshaker doesn’t ignore cover, so try and stick to units in the open.

At Strength 9, it stands a good chance of popping a vehicle. Remember that you get 2D6 and pick the highest when rolling for armour penetration. This means you have a 56% (5/9) chance of glancing or penetrating a Land Raider with a direct hit, compared to a 33% (2/6) chance with a Lascannon.

Don’t expect too much. You will miss a couple of times in every game, so either aim for a large concentration of enemy forces, or just accept the fact that the shot stands a good chance of missing. Because of this, I would recommend that you fire your Basilisk first, before you decide what to shoot with more reliable weapons.

Remember that ordnance barrages are the best pinning weapons in the game. Especially in 1500pt games or smaller, pinning one key unit can be a game winner.

This is easier said than done!

Because the best place for your Basilisk is in one of the corners, you are vulnerable to outflanking forces. There isn’t a great deal you can do about this, unless you want to keep a unit back to guard your artillery. There is only one situation that I have done this, and that is in Capture and Control games where I have an objective deep in my deployment to defend. When I’ve run two Basilisks in opposite corners, I’ve never had both survive, but I’ve never had both destroyed except when I played a White Scars Khan army.

Hiding your artillery behind a big building or terrain piece keeps you out of sight, but forces you into indirect fire. This is my preferred option though, so long as there is a suitable building near a corner of the board.

The Basilisk is the most common, mainly as it is the only one available off the shelf at GW, but there are other variants of course.

The Medusa is to the Basilisk, what the Demolisher is to the Leman Russ. It has a shorter range but hits harder. I generally prefer the Demolisher on all counts at short ranges, except the AP1 Bastion Breacher shells, which are great against Mech forces. It does cover the 36” blind spot of the Basilisk well though, so one of each can be very effective.

The Colossus sacrifices strength and direct firing for the ability to ignore cover saves. The obvious use of this is MEQ killing, knocking off vanilla marines on a 2+. The more subtle use is against skimmers and bikes, as the ignorance of their cover save really leaves them vulnerable. It also looks awesome!

The Griffon is usually overlooked, since it is only 50pts more for a Basilisk. However, for 10pts less than a Space Marine Whirlwind, you get something that is better on most counts. If you have 75pts spare, they are a worthy investment. They tear through Eldar, Tau and other Guard infantry, and their improved accuracy is very useful.

The Manticore is a separate entry, but competes for the same battlefield role. Their best role from my experience is as a vehicle killer against Mechanised forces. I had one fielded against my World Eaters. It immobilised a Land Raider and wrecked a Rhino in turn 1, and immobilised two rhinos in turn 2! However, in turns 3 and 4, it killed 2 Berzerkers.

There is so much to cover, I have only scratched the surface. Feel free to comment on your experiences and tips for Basilisks, and the other IG artillery options. For direct questions and feedback, drop me an email at [email protected]