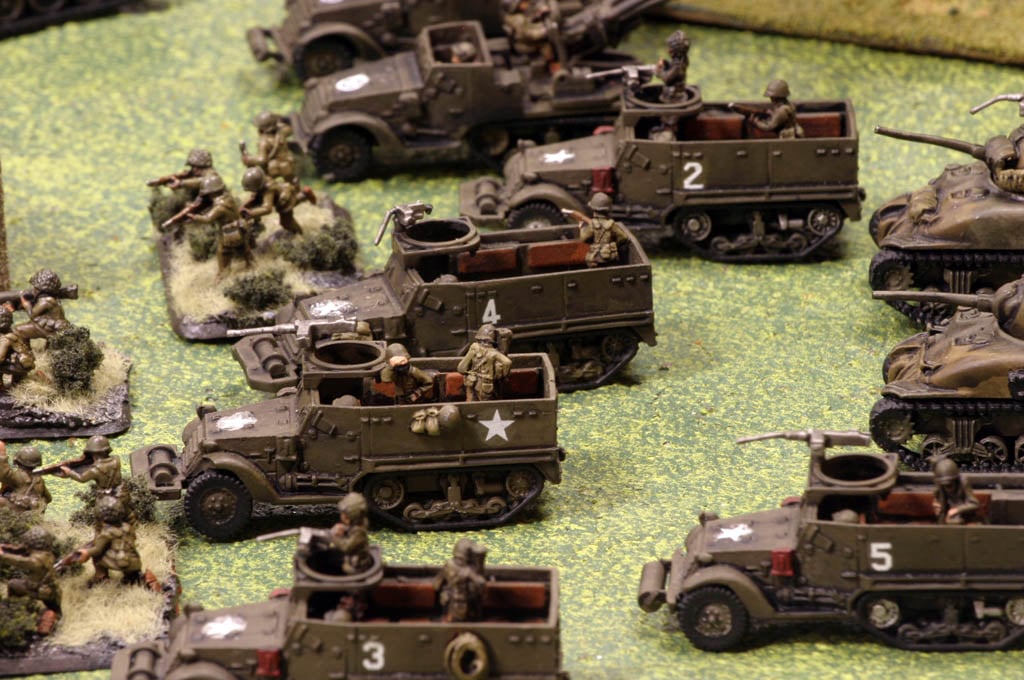 Part II of my experiences playing a US Armored Rifle company in Flames of War.

You’ve got the models, you want to play, but you’ve got to put together a list.  Here’s some ideas of how to start building that list.

It’s been commonly stated that in Flames of War, trained armies win in the shooting phase, and veteran forces win in assault.  Many posters around the “interwebz” will say you should always be veteran if you have the chance.  Well, I started with trained; partly because US Armored Rifles can only be played as trained in mid war, and because I enjoyed the “security” of being able to field lots of units and support options.  I’ve started messing around more with veterans lately, and although that extra bump up is really nice at times, I’m still very partial to confident trained forces, and here’s why.  The description on the US Armored Rifle (and German Panzergrenadier) platoon boxes talk about firepower.  You have neither the numbers of a rifle company, nor the superior armor and high strength shots of a tank force.  The advantage you have over both forces is a lot of shots and a lot of versatility.  So why not maximize that advantage by staying trained and having MORE firepower and more individual sources of mobility! Yes, a trained company will be easier to hit, and won’t dig in as well, but you’ll have more platoons on the field.  A higher platoon count matters, especially if it takes you from an odd to an even number of platoons.  The difference between having 7 platoons and 8 really comes into play in the missions where at least 1/2 your force must start in reserve.  In those scenarios, having that one extra platoon in your force can make all the difference.  The other reason to consider a trained force is that although the jump from trained to veteran might only mean one more platoon, I’ve found that often those extra points are enough to really balance out your force.  It’s relatively easy to make a list geared entirely for attack or defense, but to be pretty good at both is much more difficult.  The points saved by staying trained allow you to do that.  Do veteran forces have their benefits?  Sure!  If you’re playing a Cobra and you have the “always attacks” rule, then you can safely design an army purely for attack (and hope you don’t come up against a tank army that always attacks!) and keep the benefits of better training.

Once you’ve selected your training you’ve got to draw up the list.  What you’ll need changes quite a bit from mid to late war, simply because of the point costs.  For now, we’ll just talk mid war, saving late war for another day. Those support options really add up, and they’ll make the difference between fitting in that extra platoon or two in mid war.  Remember how mechanized forces need to be prepared to both attack AND defend?  Not having the points for that final platoon can makes balancing your mid war lists a difficult thing to do.  This is the case where having the “always attacks” rule from Cobra would be nice.  Too bad that’s a late war book.

You’ll need your minimum of 2 AR platoons.  Trust me, pay the points for every single bazooka.  There are still plenty of mid war tank forces you’ll need those bazookas for.  Actually, the high point cost and scarcity of heavy tanks in mid war means they’ll be rarer, and those 5 bazookas are even scarier to an opposing general.  You could also consider the 37mm guns here, as they’re one more way to project long ranged light anti-tank fire.  I’ve lost a game or two when my tanks were taken out, and I had no good means of knocking out universal carriers sitting 15 inches away from my infantry.  But back to the subject at hand.  I feel confident sticking to just the 2 combat platoons, and using the remaining points to add in support.  Two combat platoons allows you to camp on two objectives in defensive missions, but you still have 26 total stands of infantry to assault baddies off the objectives when attacking. Which support options you take is more problematic- the points are so tight you have to make an effort to optimize your choices.  At one point I would’ve said medium tanks (Shermans or Lee’s) were a necessity, but I’m now moving away from that position.  AT 10 shots at long range don’t cut it as your primary anti-tank weapon, not even in mid war, not with all the StuG’s, T-34’s, Tigers, and even opposing Shermans running around.  Consider this, at long range a front armored 6 tank will save against your Sherman or Lee on a 4+, and tie on a 3+.  A Tiger or Panther can’t be touched at all.  M10’s are more lightly armored, and almost certainly overpriced for their rules, but the statistical difference between AT10 and AT12 is huge, and the point costs are similar that they can sub in as your main anti-tank platform.  You simply have to be careful with them.  Artillery and/or limited air support can also help stop the enemy armor.  If you do want tanks, consider Stuarts.  They’re fast, relatively cheap, and their main guns are great at killing light vehicles and digging out stubborn infantry or guns.  They can play the same role in late war, essentially serving as assault guns.  Mortars and/or Scotts round out the list and provide smoke options.  Here’s one 1500 point mid war list based on those recommendations: If you really trust your dice, or don’t face off against a lot of armor, you could swap the M10’s or the Stuarts for some artillery, armored machine guns, another AR platoon, or other options.