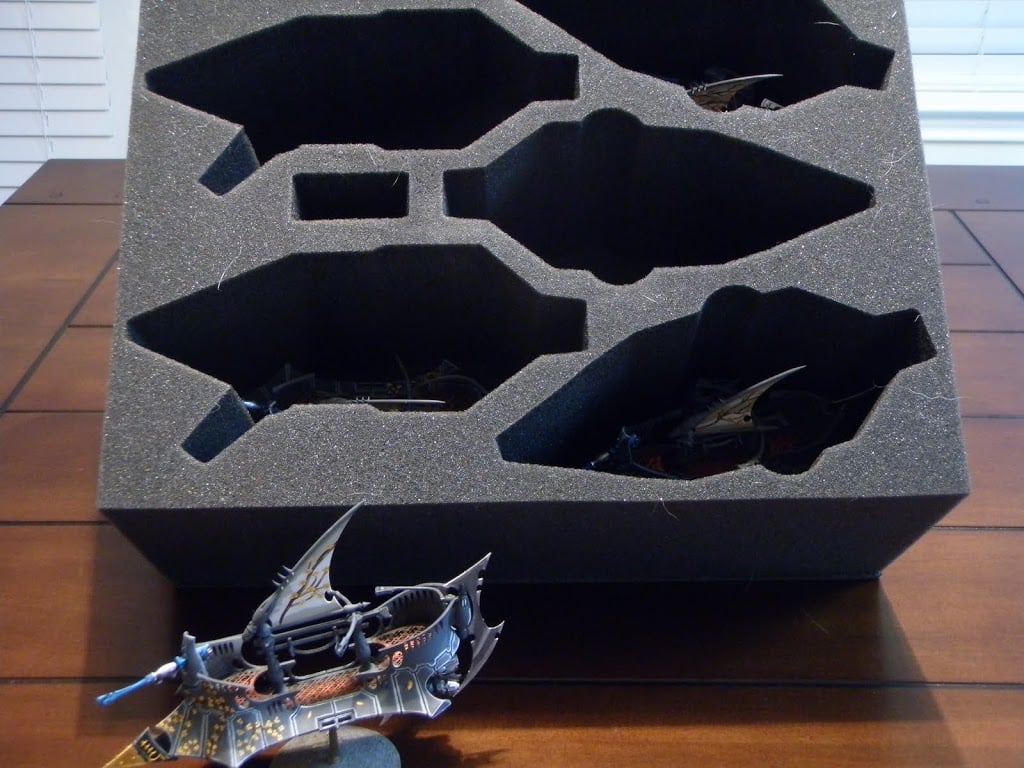 Battlefoam was nice enough to send us their new product line of trays for Dark Eldar.  Lets take a look.

When I opened up the shipping box I was surprised on how tall the foam was actually for the Dark Eldar Range. The first tray I went to was the vehicle tray which held 3 Ravagers and 2 Raiders. This tray was 6 inches tall and I wondered why at first because I had my sails magnetize and my flight were not glued in. All of a sudden it clicked, they made it that tall so you can just drop the model with flight stands and sails attached into the foam. It was perfect and the models fit nice and snug. They even have a section cut out for the Dark Lance weapon mounts so it doesn’t get bent at the front end when moving the model.

The second tray that we got was the Reaver jet bike tray which was a pretty deep tray itself but for the same reasons above it holds the Reavers with their flight stands on. The tray fits 12 Reavers which is what most people will have in an army. What was nice about this tray though is it has deep slots for bigger models like the Incubi or other Dark Eldar models like an Archon. I could fit all my 14 Incubi plus special characters and still have room to build out my collection.

The third tray I got was the one for Dark Eldar Wyches. It holds 40 Wyches and a bunch of special weapons at the top of the tray which is nice. You don’t have to fiddle with models to figure out where the special weapons are but you only have room for three Shard Nets and three Razor flails. It’s a good tray but what if I want to have 6 Razor fails it might not be the best fit. If you are taking advantage of extra special weapons it might be better to get a custom fit tray from them instead of just using this one but for all around armies this tray still works well.

I think the fourth tray is the best all around one made for Warriors. It holds 40 Warriors and has a section at the top for 4 special weapons like Dark Lances and Splinter Cannons. It works great for my army as I was able to put all my Warriors in the tray and it’s nice because each section has a little part cut out for the rifle. If you cut out square shapes for these I found out your weapons break all the time and there is too much room for the models to move. Battlefoam solved that with this tray, and also to boot if you have a small 10 man Wyche or Blood bride Squad they fit perfectly in this tray also.

Overall Battlefoam as always has done a great job with the Dark Eldar Foam product line. the quality is top notch and remember that you can always do custom designs if you need a tray to fit that special something your crazy army needs.

Now the Kabal of the Orange Blossom can travel in style. Darkwynn out.