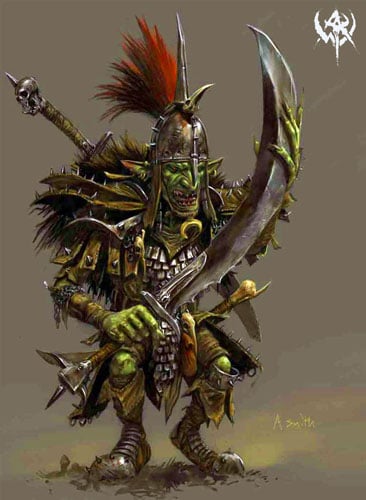 Its time for a little chatter about the next reported Army book barreling our way for Warhammer Fantasy – Orcs & Goblins.

Basics
The new O&G book is confirmed for March 2011
Pre-orders will be up at February the 9th.
Releases the 5th and 19th of March.

Army Book
According to Harry, “in 8th edition, and starting with Orcs and Goblins we can expect a whole different kind of army book. Obviously many of the same sections will be there but expect something a bit different.” The army book is rumoured to be hardcover, and to be a good bit bigger than the current one.

We keep all current special characters(that includes Grom in his chariot!) and get Wurzzag and two goblin special characters; both heroes, one of which is a forest goblin on a giant spider (aka cavalry base spider) for a total of 15 lord choices and 11 hero choices!

We get a new model, the Arachnarok spider. It can be taken as a mount for a common goblin great shaman, or it can be a rare choice. As a rare choice it will have options for some warmachine thing or other special rule in that regard.

Common goblins will get some sort of a unit upgrade. Hastings hinted at something that has two handweapons but is not an assasin.

(Common) Goblin characters will be able to ride Giant and Gigantic spiders, so an all spider army should be viable (by Hastings).

As with all this, standard caveats apply.  That new giant spider is said to dwarf the Skaven Screaming bell! This one has kind of snuck up on us, but February 9th is just around the corner. Have at it folks.