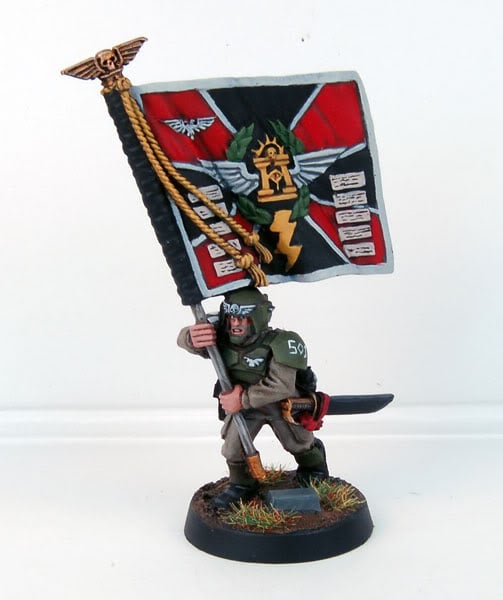 Hey Guys, it has been awhile since my last post. Real life has been pretty hectic and I had to unfortunately put my Wargaming on hold for the most part. Now that I have a bit more time on my hands and a bit more cash I’ll be investing in finishing my Cadians.

So over the next few months I will be getting my army up and running and I wanted to showcase some of the pieces as I completed them and some of my thought process behind crafting individual units. I want to note that I personally am a mix between a fluff bunny and a competitive gamer. So if some of the unit selects don’t quite make sense consider this my disclaimer!

So first things first I decided I wanted to go with a classic Cadian scheme as I think the military green and khaki look great on the table and in force. With this in mind I needed to come up with a way I could speed paint the infantry, but still use a similar technique to be able to make officers, command squads, and important models stand out. After some mucking about I decided to go with a wash based technique. The idea is simple in theory. You basically base coat a model with a light color then wash it once to get a nice basecoat and highlight. If the model is one that you want to stand out you can let that wash dry and go back and darken recesses with the wash and bring out more dynamic elements of the model without ever making the model brighter with highlights. I’ve found that this technique of reverse shading helps to make the army look as a cohesive whole, but as people start to look close you get those compliments on detail work. I tested this out with my Commanding officer as my first model (Colonel Festus of course!) and the speed painting technique on his squad. I was very happy with the way this came out and I wanted to run down each model and the thought process behind it. So the Colonel himself goes back with me quite a long time. This is in fact his 4th incarnation. Before I started writing for BoLS I sold off my first Imperial Guard army and someone in their gaming circle bought it (Mkerr). So the original and 2nd version of Col Festus are still fighting on the war torn battlefields of Austin somewhere (in Bigred’s house). This time around I wanted to make him stand out as more of an officer. So I rummaged through my bitz box and pulled out the Baneblade sprue. I felt the bionics on the commanders helm worked quite well and kit bashed it with the Cadian Command Squad sprue to get a unique feel to him. He has always had bionics and a power fist from a nasty run in he had with an Avatar way back in the day. The fluff stuck with him as being a die hard and so I have kept it throughout the years. I use him as a count as Straken normally as their fluff is very similar. I am planning in the future to create a “pre wounded” version of him to use as Creed probably.

So here I wanted to test out using the GW washes to really bring out details and bring that model from rank and file infantry to more of a showcase model. I did this by doing 3 levels of shading with the washes. I felt this was adequate enough to bring out extremely dark, but gradual shades. Overall I was extremely happy with the result. The Base colors are Privateer Press’ P3 Trollblood Highlight for fatigues base color shaded with Devlan Mud. The armor is Privateer Press’ P3 Thornwood Green highlighted with Catachan Green from GW’s line. The flesh is Tallarn Flesh washed with Ogryn Flesh and then highlight up using Privateer Press’ Marrow White. The stubble was then applied by mixing Adeptus Battle Grey with Tallarn Flesh. Overall I was extremely happy with the way the miniature turned out and was proud to call him my 4th encarnation! The Astropath was first and he was rather easy to blend in as the Astropath order’s color is green. I simply used the technique I normally did, and kept the majority of the model Trollblood base to keep that Cadian feel. I still felt the model needed to pop some how and so I added a bit of OLS around his eyes to give him that creepy vibe!

The bodyguards were rather easy as they were just supposed to be cadian veterans. I just spent a bit more time around their faces to give them more character and the red accents of the command squad. The Company Standard was a bit hard as I had to mix in some colors to the pallete that I don’t normally use in mass such as red. I’ve always had a love hate relationship with red because it can be a pain in the butt to work with. I turned to P3’s line and picked up Skorne Red. This was a nice deep rich red that I was able to shade using Devlan Mudd yet still keep that wonderful hue of red when I went back and highlighted it. Very impressed, the red is done in only 3 steps: Basecoat Skorne Red, heavy wash of Devlan Mud, Highlight with Skorne Red. Done. The Officer of the Fleet was by far the hardest to figure out. I knew I wanted to tie the blues in some how and leave the greens at home. This was hard because I still wanted that naval feel, but I still wanted him to be part of the “Cadian” Naval Fleet. I finally settled on doing most of his uniform in Trollblood Highlight with P3’s Traitor blue accents. I was quite happy with the final result. He looks as pompous as I had hoped! Subscribe to our newsletter!
Get Tabletop, RPG & Pop Culture news delivered directly to your inbox.
By subscribing you agree to our Terms of Use and Privacy Policy.
~So there you have my command squad in all its glory. I hope you enjoyed the article and you can always come and check out what is cooking in my work shop at First Rank, Second Rank! 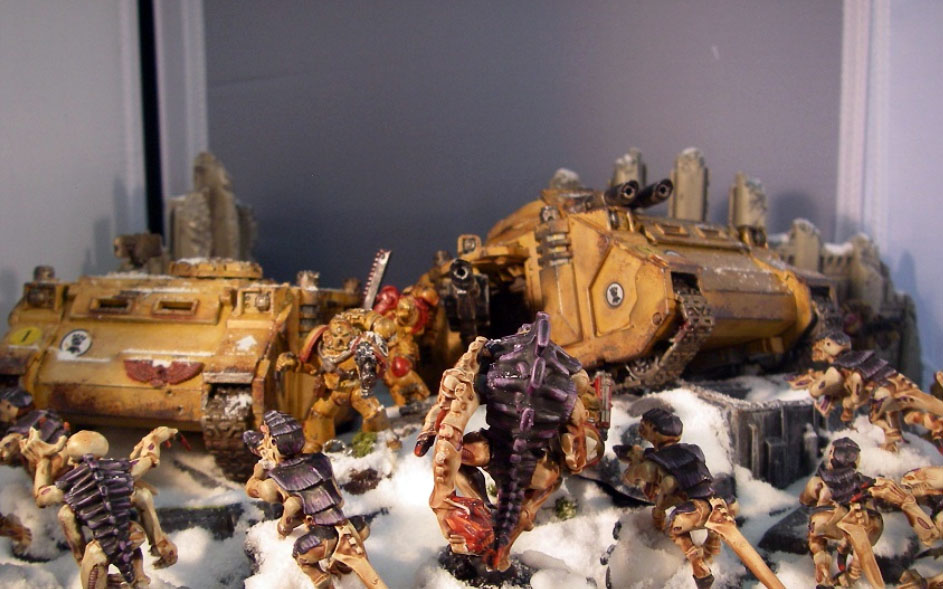