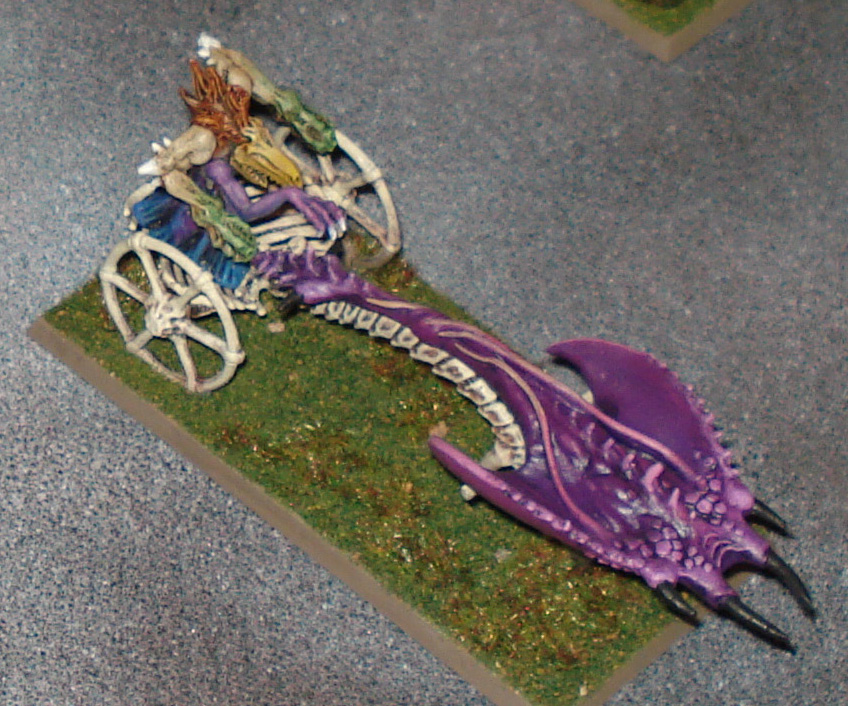 Here it is folks, an article by me about me!  And (I hear you say), how is that different from all the other times?  Well (I reply), this time it’s about Daemons!

So let’s demonstrate how different it ain’t.

So is this overdue or overdone?

Hello again boys and girls, children and Unicorns of all ages: my name is Brent and I’m a grown man who plays with toys.  I’m so hobby-obsessed that a few times a year I pack up my toys and travel across the country to play with other like-minded individuals.

The last time was a little event called Adepticon!  I could gush about it – I have and I will again – but today I’ll limit myself to the army I took to the 40K Championships, the event’s primary solo 40K tournament.  Here’s the list I took: At 1850, this is my optimized, competitive army. Because this is the internet, I need to explain that.
(At this point I wrote a section called ‘A Philosophy,’ but due to the length of this article I chose to cut it. I’m posting it at Strictly Average today if you’re interested in an addendum to all this!)
The Breakdown
I said, “This is my optimized, competitive army.”
My:  This is my view on Daemons.  There are many views, but this view is mine.
Optimized:  For the points, in this case 1850, this is as trim and efficient as I can make it.
Competitive:  It’s a list I can beat anyone with, though some opponents are easier than others.
My:  This is my view on Daemons.  There are many views, but this view is mine.
I’m not out to tell anyone what they should play. While I think my take on Daemons is the best the book offers… it’s just my opinion.
Still, it’s an opinion backed up by countless games of 40K. I started the army when all the dudes at my local store decided to build new armies, but there was a twist. Those who agreed to participate had to accept the result of a random roll!
It’s fair to say I wasn’t happy when I rolled Daemons as an army, but it turned out to be the best thing that’s ever happened to my game.  It forced me to reexamine my approach to every aspect of the game, and I learned this army from the inside out and from the ground up.  I tried every serious combination in the book.
Fateweaver and Bloodcrushers: tried ’em.  Soul Grinders: tried ’em.  Flamers: tried ’em!  Still, it’s hard to impress that on folks… here’s someone who recently dropped some well-meaning advice on one of my YouTube videos.

k this is from one daemon player to another drop the fiend and the heralds and get flamers and a greater deamon u will still have the mobility of the fiends with the flamers but they have better weapons and the greater deamon (depending on the god) are moslty unstoppable﻿ ……. oh and get rid of princes for soul grinders as they can take more of a beating and are more cost effective

With all due respect, he wants me to drop – literally – the most effective part of my army and build the same list people haven’t been beating Mech Guard armies with!  It tells me he doesn’t understand how my army plays.

Do you have a problem dropping a Greater Daemon?  One unit – no matter how tough – doesn’t make a good army.  You also can’t take a handful of good options, throw them in the soup, and expect it to work.

An army is built with a purpose, and there are lots of ways to do that.  Still, some are more efficient routes than others…

Optimized:  For the points, in this case 1850, this is as trim and efficient as I can make it.
This army Spams units, and if I had the luxury of playing one of the top Codexes, it’d be easier to avoid that.  When I design a list I try to build in redundancy in numerous ways… but that’s easier to do with some armies than with others.

So let’s examine Daemons.  They rock in close combat, but they don’t have many serious ways to shoot armor, meaning transports can be a problem.  AV14 is a bigger problem, but one thing at a time.

That’s the hurdle – that’s the challenge that must be addressed.

I chose to do that with Bolt of Change, Str8 Ap1, and Breath of Chaos, 4+ Glance.  Secondarily, I’m able to accomplish it in close assault – and I do – but that alone wouldn’t be enough.

If you understand that, then really the Daemons list I posted becomes an effort in the obvious – I literally put Bolt in every single slot I could!  I’ve got Princes slinging it on a 2+, Heralds on a 3+, and Horrors on a 4+… and even with all that it’s not nearly the overwhelming shooting other armies are capable of.

What I do have is staying power.  Each of my units has an invulnerable save and Eternal Warrior; don’t discount how effective this can be.  It means that those armies with quality shots, like Imperial Guard, are instead just one more save to make.  It does mean that I’m vulnerable to units that spit out a large volume of firepower, like three Warwalkers with Scatter Lasers, but thankfully those builds are rare in the current Meta.

Since shooting is something I’ve had to overcompensate for, it means that I need to take the most efficient close assault unit I have available.  That’s Fiends.

Here’s a lesson in optimization: Fiends beat Bloodcrushers because Fiends are cheaper than Bloodcrushers.  Obviously ‘Crushers are an incredible unit… I just can’t afford to take them.  When you make the decision to take Bloodcrushers you then have to build an army around them…

…in much the same way I had to around shooting.  ‘Crushers are such an investment you have to find a way to recoup it, yet Fiends are a bargain for what they’re capable of – they’ll reward the decision to include them every time.

The movement phase is at least as important as the Shooting and Close Assault phases.  Speed and mobility are vitally important – but I don’t have the luxury of cheap transports.  My air force are the Heralds, who move like Jetbikes and can redeploy easily.  Supporting them are the Fiends, who move like Beasts; remember, they can potentially assault someone 24-inches away!

For me, ‘Optimized’ means taking the units I’ve determined I need in the most points-efficent manner possible.  Breath is a really important component of my rather aggressive game, but since it’s 30 points a model I can’t just drop it everywhere.  The Heralds have the speed to take advantage of it but the Princes don’t, so I save the points on the latter.

I worked and reworked this list, juggling elements until I had the balance I knew I needed.  Even the oddest unit, the Horrors with the Changeling, was thought out: I sacrificed a few odd points to include an Icon and the Changeling – the last being primarily for the allocation games I could play with 4 distinct types of model in unit.  The Icon is an element I don’t think I need but is insurance against a tough scenario or difficult board.

Competitive:  It’s a list I can beat anyone with, though some opponents are easier than others.
An army is more than the sum of its parts.  It has to accomplish a few different tasks, many of which I’ve touched on in the previous segment.  ‘Beat anyone’ means I want an army capable of winning against anything I might face.  (My army’s toughest matchup is the standard Vulkan list, which normally includes a Land Raider and a Librarian with Null Zone… but I can and have still won these matches.)

The last may be the most challenging.  Gone are the days of gunlines sitting static in their deployment zone blasting opponents off the map.  These days the games are more challenging, so it’s important to develop a strategy flexible enough to cope with whatever the scenario throws at you.

I have a personal, 3-word saying which sums up my approach:  Competitive is Consistent.

Basically, all it means is that it’s not good enough to do all those things I’ve listed in one game, you have to be able to do it through four or more.

It’s actually the reason I tried and rejected Fateweaver builds: the chances are very good he’ll fail a leadership test and disappear on you in at least one of four games during tournament play.  The odds are even better – 1 in 3 – that he won’t show up in your preferred wave…

…so aren’t you really asking too much of chance?

My list is designed to play consistently throughout the day, so while I may change strategies depending on the opponent I can count on the elements of my army to at least show up and throw down!

It’s for that reason I rarely stack drops – normally I’ll split the army fairly evenly so it plays the same regardless of the dice roll.  I read an article online where the writer literally said, “Okay, if I don’t get my preferred wave I’ll forfeit the game, then start over!  My army needs that kind of help…”

That line irked the crap out of me.  First, it presupposes the army you’ve chosen to play isn’t good enough to use without forfeiting 1 in 3 games… whine much?  Next, it assumes your opponent should have the good grace to in effect give you your preferred drop, just for the pleasure of your company.  If someone pulled that on me, I’d say, “Thanks!” then take my win and pack up and play someone else.

Er, I think I got a bit too invested in that last paragraph, but I can’t stand defeatist attitudes!


Look, I’ll boil all this down to three simple things: 1) play what you want, how you want, 2) if you practice you’ll get good, and 3) if you’re good you’ll win games.


As always, I want to hear from you.  These are my thoughts and opinions, which represent only one point of view in the many out there.  Let’s hear it!