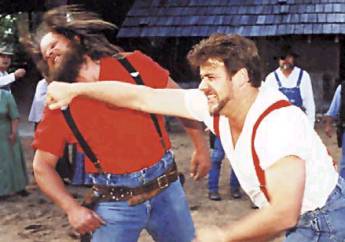 Goatboy here again just wanting to give a little run down of my Adepticon experience. This is the 4th time I have braved the travel to the Windy City and as usual I had a blast throwing dice and playing some dudesmen.

If you pay attention to the website you most likely saw the wonderful video done by the brave and bold Brent from Strictly Average. We picked him up and he ended up doing the best out of the group. He got to day 2 with the internet hated Chaos Daemons. I am sure he will have 18 weeks of articles from his trip so look for his adventures birthed onto your computer screen at some point. But this isn’t a Brent report – this is a Goatboy report so lets begin.

Thursday – The DRIVE!!! Let me tell you gamers pack a lot of crap. I had my army, a suitcase, an inspiration notebook, and some water. I wasn’t allowed to drink a lot because I would get yelled at for my baby bladder. So I kept it low key and the drive up was actually not nearly as bad as some of the other times when we had to drive through tornadoes, storms, and bad gas. We took one Van of Doom and the drive was supervised by the evil An’grath the Unbound. It was as much fun as it can be in a van full of gamers. Lots of Grey Knight chatter mixed in with army thoughts and overall strategy. We got in around 1am and crashed in the bed for the next few days of WARHAMMER!!! Friday – Warhammer 40k Championships! You saw the list I took earlier last week so here is how I ended up. I didn’t make day 2 but got 11th overall with my list. Not to shabby and I went 3-1 for the day. Here is a simple battle rep for the day.

Here are the mission objectives if you want to figure them out. CLICK ME

Round 1 – Matt from Canada with Ultramarines and Pedro. I won 2-1. Missions were Annihilation, Battlefield Control, and Lead by Example with Spearhead setup.. I got Lead by Example and Annihilation and Matt got Lead by Example. Matt’s list was Pedro, Terminators, Land Raider Crusader, Vindicator, Drop Pod Sternguard, 3 Tacts, 1 Scout plus Speeder and a Thunder Fire Cannon. It was a crazy killfest in this game and both sides got smacked around. Matt went first so I reserved the bikers and they came in turn 3 and started doing what they do best, rolling dice and then rolling them again. I ended up killed a lot of stuff and lost almost all my troops. I spread out enough to contest any table quarter and killed more things than my opponent. I did get lucky with some missile blowing up his Vindicator first turn and overall did well with my penetration rolls. I could have won more if I blew up the Land Raider with a BS 3 Multi-Melta on my Attack Horse but as we all know – BS 3 doesn’t cut the mustard when shooting vehicles. I will hit dudes but not vehicles. Great game and an awesome opponent who is friends with Teras from Geek Nation Tours.


Round 2 – I ended up playing Justin with Death Wing from Phillie. I have done some paint work for a friend of his as well as getting to know Justin and Paul (From ETC team) during last years Da Boyz GT. The mission objectives were The Sum of Parts, Tactical Markers, and Recon. The Sum of Parts has you calculate the killpoints your opponent has in total at the start of the game (ie before you combat squad or break apart your blobs) and you have to get half of that to get this objective. I gave the first turn to Death Wing and set up hiding away with a Pitched Battle set up. I ended up against a Death Wing list with 6 squads of Terminators and the goodness you normally see. I ended up winning this one 3-1 and basically split his army apart and tried to bring the lovely power of averages to the table. I should kill 5 terminators with 30 wounds so basically that was my plan. He had some terrible assault rolls and I won a lot of crazy combats and was able to win the attrition war. Justin was a great opponent and we had a good time. The worst thing was that we both wanted to do the ETC thing too and were ready to throw down the cash to fly over and do some good ole damage.


Round 3 – I played Henrich from Team Sweden. Yup they flew over to pound some sissy Americans in the face. Henrich was playing Ultramarines with an odd build that had a Librarian with Nullzone, 2 Typhoon Speeders, Riflemen Dread, Thunderfire, Assault Terminator Squad, Land Raider, Razorbacks with Heavy Bolters and some Tactical Squads. The mission was Annihilation, Seize Ground, and Marked for Termination with a Pitched Battle set up. I went first this game. This was the end to my ETC dream and I don’t think I made more then one mistake (placement of my Long Fangs) and lost to some really terrible dice rolls. Henrich was rolling hot and that will just happen sometimes. I don’t know if I would have won even if I rolled well as the Swede was a great player. We had no issues at all in the game and it was one of my better ones even with a loss and the end of my hopes. The crazy thing is that Henrich went on to knock another Austin player out of the top 16 with the White Dark Eldar I painted. These Swedes rocked and I wish I had gotten more of the liquor they had brought. To give you an idea of the dice, 3 wounds to a 2+ wolf lord ended with 3 1’s. Someone must have gotten lucky at a Casino :). 0-3 for me.

Round 4 – I played a South African named Brindsley who brought Blood Angels. I had just met this guy earlier when Black Blow Fly introduced me as I was bouncing through the hall. He had a mixed BA list with Meph, some Rhinos, some Razorbacks, drop squad with packs, a Death Company, another Librarian, and 6 Attack bikes. The mission was Annihilation, Defend the Flag, and Take and Hold. It was a Dawn of War set up so it was going to be an interesting game. I ended up getting into a middle fight with Meph and the Death Company and the biker squad ended up winning in the end and helped chase Meph off the table top. Stupid lack of fearless makes the mad Space Vampire a sad goth panda. Fear the darkness chased off one Long Fang squad and I just ended up winning the slow game as my Grey Hunters started eating some units apart and took out his tanks. He had one get stuck on some terrain so it was up to stringing out and hoping for the best. A going to ground check meant I could contest both the objectives he strung out and his one jump Assault squad couldn’t string long enough to get two. I won 2-1 and got to go 3-1.

I went 11th overall for the first day and felt pretty good about it. It was a long day and I had a blast and thought the missions were good overall. I think this is the right step to take towards a much more competitive and enjoyable experience. I got 40 out of 40 for sportsmanship and found that to be the most impressive score. This game is supposed to be fun and even if I play meanie headed list I went to end the day on a fun note with my opponents. It was a great day and I ended up hitting a great bar with about 20 of the BoLS writers for some food and beers.


Saturday – I took Saturday off as last year I was mind wiped after playing the Team Tournament. I decided to just hang out and chat with people and met a bunch of the “internet” names. Mike Brandt was cool and I got to meet Tony who ended up winning the whole thing with Space Wolves on Sunday. Two years in a row and the Sons of Fenris are kicking some butt. Of course they are making the internet mad but who can be mad at cutesy space puppies? I ended up shopping a lot of the day and bought some cool things from the Cool Mini or Not store and some more Rhinos and Dreadnoughts for my upcoming armies. Later that night I went to the trade day thing and got even more Rhinos and Dreadnoughts too. I know – I have issues. I also ended up getting my Grey Knights book as well as a Dread Knight to kit bash into something cool for The Spikey Bits Dread Knight contest. Fun times indeed. It was great to actually do some retail therapy and get some stuff I would normally never get a chance to buy. I got some cool Scibor stuff so look for some neat conversions coming to my upcoming Grey Knights army. Later that night we had a “team/group” met up where I got to chat with some of the Toledo guys as well as some of the other game playing teams. It was fun to just hang out.


Sunday – This is the last true day of the event and I just basically hung out some more as I didn’t feel like trying to play Gladiator. Four good solid games was enough for now hahah. It probably didn’t help I was run down from the drive up too. This day I helped Brent interview the winner Tony as well as Mike Brandt with the Nova Open. Depending on how things go with my days off I am going to try to make it up there and try my best to win with whatever army I decide to bring. I ended up drawing on two Battlefoam bags which are below. That is right I am drawing on some bags. So if you are interested and you see me around at an event I can draw on your bags for you. It isn’t free but I can always be bribed :). I plan on getting some different paint pens to do some different effects and bring about some cool work on your bags. Monday – THE DRIVE TO BRING OUR HAPPY BOOTIES HOME. Nothing is worse than driving home. I wanted to see my wife, get to a bed that I can sleep well enough in, and just get my butt home. It wasn’t as bad as other years (getting lost, too tired, etc) and we made it back safe and sound. It was windy as hell. I found something funny in a sad little gas station/slot machine casino. For all those that I met there – thanks for coming up and chatting with me. I tried my best to not be any kind of magical dick head and I hope everyone had a good time chatting it up with me. If I offended anyone I’m sorry. I just wanted to say I had a blast and will be coming back again and again to the windy city and hopefully I can get a chance to win another crazy hammer.

And there were no cats in this post!!! Muahahahhahaha!!!  Goatboy out!