This article is intended for building a Draigowing army (all terminators) but it could certainly apply to other builds as well.

I have been spending most of my time so far building my own army which has a high degree of customization so I should say up front I have very limited experience at the table – that said I have watched quite a few games and often watching other players (what to do and just as importantly what not to do – heh) is often how I learn the most in regards to how I want to play a particular army. I first saw the new Grey Knights in action in a large team game and the dramatic image of stalwart Grey Knights trodding across the battlefield, guns blazing, is primarily what drew me to the army. I have used Stormravens extensively in some of my Blood Angels armies and wanted to try something completely different for a nice change of pace.

Introduction
I am currently building a Draigowing army. I have played Deathwing on and off since I first started to play 40k so the ability to field elite terminators is very intriguing to me. It’s rather obvious that Lord Kaldor Draigo and a Librarian are the two central characters for this style of army. They are not mandatory though – you could just as easily take a generic Grand Master and an Inquisitor (e.g., Coteaz) for your two HQ and they both can be quite good at what they offer plus you can save a considerable amount of points not going with the dynamic duo. I like Draigo since he unlocks Paladins as a troop choice plus he is a beast in close combat. I prefer the Librarian since he has access to all of the psychic powers and it looks to me like the following build is currently the most popular for the Librarian:

The Paladin
For an extra fifteen points you can take a Paladin over a Grey Knight terminator – you get +1WS, an extra wound, the option for master crafting a weapon plus you can take two psycannons per five Paladins (Grey Knight terminators can only take one psycannon per five terminators). You can build a fully divergent squad by taking different weapons and master crafting some of them for maximizing your wound allocation abilities. You also have the option to upgrade one Paladin to an Apothecary for 75 points. I am up in the air when it comes to upgrading a Paladin to an Apothecary – it’s a lot of points, each model has two wounds, you can easily design a fully divergent unit and they a 2+ armor save as well. So I have to just ask myself is the upgrade to a an Apothecary really worth the points? The main disadvantage of the Paladin is they are insta gibbed by S8+ attacks and FNP does not offer any advantage versus this weakness. So generally speaking one Paladin is no better than one Grey Knight terminator when it comes to suffering from instant death attacks.

Obviously the Paladin is an excellent troop choice albeit an expensive one in terms of cost points per model. The extra psycannon per five models is a big advantage since they can move and shoot with the full compliment of shots. If you field a squad of ten Paladins (why not?) then you can split them into fully wound allocated combat squads such that one squad has four psycannons. To me that is a major advantage to fielding Paladins over Grey Knight terminators. Also if you field a squad of ten Paladins and combat squad them you only have to pay for the option of psybolt ammunition once thus saving 20 points which could go a long way towards a Brotherhood Banner.

To me the main advantage in terms of ten Grey Knight terminators versus five Paladins is weight of attacks. Let’s compare both units for shooting and launching assaults.

So the Grey Knight terminators generate an additional ten S5 shots… that’s nothing to sneeze at in this comparison, especially when you’re targeting infantry. Also remember that both units have the same ballistic skill.

It should also be mentioned here that Paladins can cast Holocaust for the sake of this exercise. I don’t see it as much of an advantage though now that it counts as a psychic shooting attack.

Ten Grey Knight terminators with eight Nemesis force halberds and two Nemesis daemonhammers can generate the following weight of attacks on the charge:

So the Grey Knight terminators inflict three more S5 attacks and one more S10 attack that wound. It’s not a huge difference but say versus an enemy unit such as assault terminators with stormshields the extra attacks could spell the difference between wiping them out or not.

Five Paladins with three Nemesis force halberds and one Nemesis daemonhammer can generate the following weight of attacks on the charge:

So you’re only netting one extra S10 attack that wounds at the cost of 25 points – not worth it in my opinion.

Ten Grey Knight terminators with seven Nemesis force halberds and two Nemesis daemonhammers can generate the following weight of attacks on the charge:

The only actual difference is one more S10 attack that causes an unsaved wound – again the banner doesn’t seem worth the investment in terms of number of attacks – basically you are simply paying 25 points to ensure the force weapons are all automatically activated. If we attach independent characters to either squad then there is a small gain in number of attacks but not much – two at most to be specific.

So the main conclusion for this section is as follows – the squad of ten Grey Knight terminators is a better mobile fire support unit and the addition of the banner makes them perform just as well in melee for the specific examples presented here. Basically you are paying roughly an additional 100 points for ten more S5 shots from the stormbolters.

Survivability
It takes ten failed armor saves to kill all the Paladins. If you upgrade one Paladin to an Apothecary (25 points to spare nets you the banner) then versus wounds that don’t ignore armor saves and aren’t S8+ it will require 15 failed saves. That means your Paladins’ survivability rate is increased to 150 percent for these types of unsaved wounds – another way to look at it is as follows… the Apothecary has paid for himself after you pass two FNP saves on Paladins with only one wound left each.

It takes ten failed armor saves to kill all the Grey Knight terminators and there is no mechanism to increase their basic resilience in this regard. So the Paladins come out on top here if you are willing to take an Apothecary. Of course you lose one stormbolter but I don’t think that’s a major loss at all – the Paladins’ strength in shooting is mainly derived from their psycannons.

Transportation
You can transport the five Paladins in a Landraider or attach Draigo and the Librarian stuffing them all into a Landraider Crusader. The Paladins can also ride in a Stormraven with up to one character. On the other hand the Grey Knight terminators can only deep strike and footslog it across the battlefield. I see the Landraider Crusader and skimmer as both being very viable for Grey Knights if you’re running a Draigowing army – you can quickly launch an assault where you want when you want. In terms of a Landraider versus a Stormraven as your critical mode of transportation I prefer the former due it’s higher resilience. It’s important to remember that if a Librarian is onboard the Stormraven you can constantly move it flat out and cast the Shrouding for a nice fat 3++ cover save… that in and of itself is a big advantage for using the Stormraven as your transport. The Stormraven is faster and can move your unit more quickly where you need them to be the most. The Grey Knight terminators could very well be assaulted by a very brave enemy unit (such as those troublesome Genestealers) so there is always that chance you’ll lose the initial charge bonus and incur more casualties.

I think these are all a very important factor to consider when designing a Draigowing army – that is decide up front what primary role do you want each specific unit to fulfill. If you split ten Paladins into combat squads then a solid option is to split them such that one squad has the four psycannons and is a mobile weapons platform while the other squad rides in a heavily armored transport acting as a spearhead to launch your initial assault. The Grey Knight terminators act primarily as a mobile fire support unit and provide the second wave for your melee.

The Wild Card – Justicar Thawn
Thawn has the potential to be an advantage for the Grey Knight terminators:

* Thawn is psyker mastery level 2 so you can cast both Hammerhand and activate your force weapons
* Thawn can be a thorn in the enemy’s side – I Shall Not Yield means he has the ability to keep coming back to life and it’s basically an uberized version of the Necron We’ll Be Back rule – he is truly a terminator of the same epic proportions as displayed by Arnold! He could give up an extra kill point but then again he might also tie up a squad of Long Fangs or wipe an IG command squad.

To me Thawn is fun so it’s worth it to me for that aspect alone to include him in my army. I think his ability to come back to life time and time again is purely hit or miss – it’s not something to count on but when it works it could be very helpful, maybe even sometimes a game winner…(remember, he’s a scoring unit) but like I said it’s not something I’d ever count on happening on a consistent basis ever.

Conclusions
* The main advantage to fielding GKT versus Paladins (10 vs. 5) is simply ten more stormbolter shots.
* If you’re willing to take an Apothecary then the Paladins are more resilient and will last longer versus small arms fire plus you can use FNP to extend the life span of any independent characters attached to the squad which could make a big difference.
* In terms of spamming psycannons the Paladins can carry twice as many psycannons if you use combat squads and are willing to take a full unit.
* At full strength both squads deliver roughly the same weight of attacks in close combat.
* Five Paladins versus 10 GKT is cheaper points wise.
* The Paladins much better lend themselves to rapid assault since they can ride in a transport.
* Thawn is a wild card that allows the GKT to use two psychic powers; his I Shall Not Yield special rule could be useful when it works but he could also just as well give up an extra kill point.

I would also like to take a very brief moment to plug a 40k GT that will be held this October in Tampa. It will in the Marriott hotel at the Tampa airport so you can fly in and never have to leave until it’s time to go back home. Here is the link to the official blog site with all the pertinent details… So what’s your take folks, GK Termy’s or Paladins?   Anyone else running Draigowing in your neck of the woods? 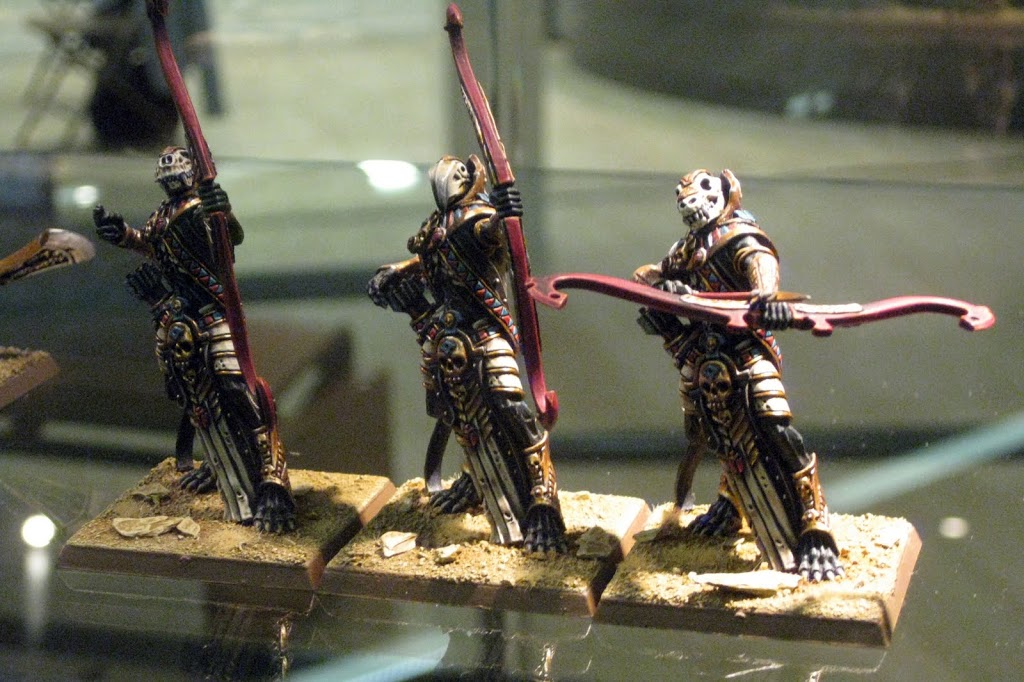