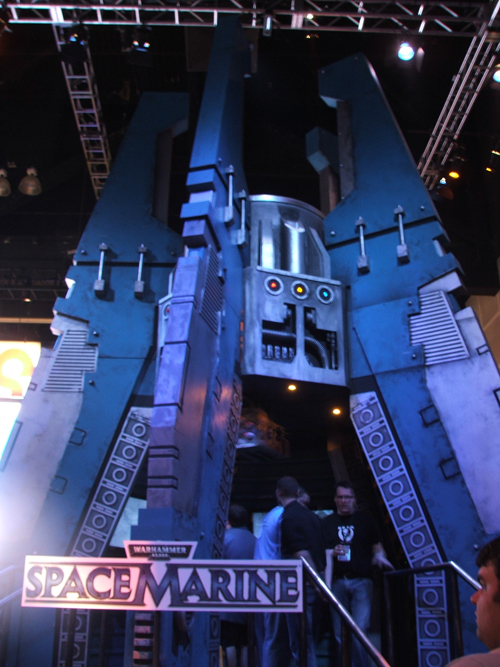 Hey, everybody. I’ve made it a habit of sending in reports of 40K activity to Bell of Lost Souls, starting with last year’s E3 and then with PAX East earlier this year, so I had you all in mind when I arrived at THQ’s booth at E3 2011 for my press appointment.

First thing I saw was a playable Space Marine demo inside this huge Drop Pod: There were three demo stations set up inside for the press, and I spent about fifteen minutes with the game in there. You can read the preview I wrote here, where I address the ridiculous notion that this game is just a Gears of War clone. Saying Space Marine is a clone just because it has a close-up, third-person camera view and your character can dive like in Gears, is like calling every first person shooter since DOOM a clone just because it has a first-person camera view and you shoot guns.

Relic has done their traditional good job of nailing the aesthetic of the Warhammer 40,000 universe. It bothers me sometimes, irrationally of course, that more of my colleagues in the video game media aren’t familiar with the 40K universe, because they can’t possibly appreciate the good job that Relic does with these games in terms of properly representing the IP.

I got to try two levels in the demo. The first had me facing Orks, which was, of course, a bloodbath. Nobs were huge and not to be trifled with. The second level had Chaos Marines, corrupted Imperial Guardsmen, and just before I had to move on to my next stop at the booth, a swarm of Bloodletters came pouring out of a warp gate that opened up right next to me. They looked gorgeous.

This picture is from the other side of the Pod, where THQ had set up some public demo stations for whoever wanted to line up for a turn with the game: I tried to get you a clear picture of the game in action, which proved impossible. This is the best of the twenty-something attempts I made: The gameplay itself is very fast, and very fun, and felt just as dead-on in terms of accurately depicting the 40K universe as everything else Relic has produced. For Chaos Marines, switch up to Plasma Guns, for Orks, grab a Storm Bolter or Heavy Bolter. Power Axes were much more devastating than chainswords, etc.. Everyone seemed to be having a good time with it.

As I walked away from the external Drop Pod demo station, I saw a corner of the Imperial Chapel from last year, which I wasn’t going to take any pictures of as you saw this already. I similarly skipped taking more pictures of the Ultramarine and Chaos Marine cosplay. But then I noticed something in a glass case on the side of the Chapel: It was the contents of the Space Marine Collector’s Edition: You can use the CD-ROM in the lower left to establish scale: that box is preposterously huge. I asked a THQ rep whether the box was actually that big or not, and he didn’t know, but look at the size of that purity seal! I figured that was it for 40K games at E3, because all they had for Dark Millennium was the same statue from last year, but then I turned the corner and looked up and saw this:

Finding this game at E3 was a complete surprise to me! Kill Team is a downloadable title coming out  on Xbox Live Arcade and PlayStation Network for $10.

Luckily, I had some time before my next appointment to try the game: It’s a twin-stick shooter with light RPG elements, and up to two-player local or networked co-op. You can play as a Sternguard Veteran, Vanguard Veteran, Librarian, or Techmarine, each with their own special attacks, and skin them as one of eight different Chapters (though the THQ rep manning the booth didn’t know which ones).

Kill Team sort of serves as a prologue to Space Marine. The story is simple: your two-man Kill Team is sent into an Ork Space Hulk to disable it. That turns out to be the same Hulk that attacks the Forge World in Space Marine.

I went back to THQ’s PR desk to grab some press assets on disk in the hopes of getting some Kill Team screenshots. Mission accomplished: here’s the Kill Team fighting what looks like a Hive Tyrant: Facing down a charge of ‘Nids across a bridge: And finally, facing a nice ‘ard charge from da Boyz: If you had a friend to play this co-op either locally or networked, I think $10 is a steal for this game, and you can unlock a Power Sword in Space Marine if you beat the first Kill Team mission. I reluctantly let the Kill Team controls go to head off to that next appointment, but made sure to make time for one more quick stop before the Expo was over.

That’s it from E3 for this year. Hopefully next year THQ and Vigil Games will have more to say about Dark Millennium!

Dennis Scimeca is a freelance video game journalist from Boston, MA. He writes a weekly column and reviews games for the Village Voice Media’s Joystick Division blog, is a frequent feature writer for G4TV.com, and an occasional news reporter/feature writer for the website Gamasutra. He sometimes blogs at punchingsnakes.com, and enjoys tweeting about games among other things: @DennisScimeca.

Author: Larry Vela
Dad, Gamer, Publisher, Pilot, Texan. All games all the time since junior-high. I started BoLS Interactive in 2006. I’m a lifelong tabletop & RPG gaming enthusiast, and internet publisher working to entertain and inform my readers every day. I've been playing RPGs and Tabletop Games since the 1970s. I'm been playing and covering Warhammer and Warhammer 40K for over 35 years.
Advertisement
Video Games Warhammer 40k
Advertisement 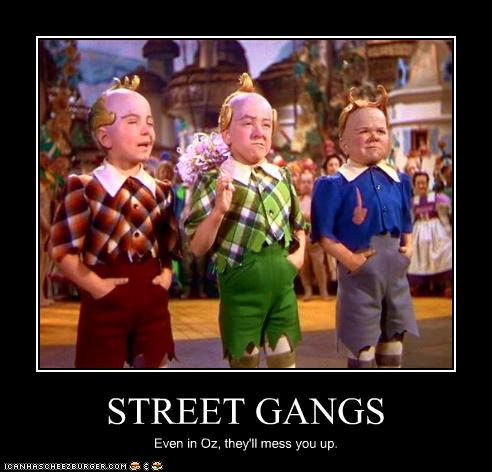