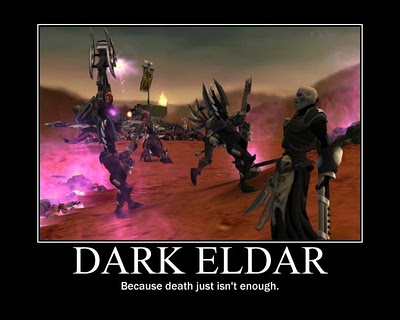 My name is Caldera and I love me some Dark Eldar.   Lets take a quick look at what my favorite army does on the tabletop.

I’ve been playing warhammer 40k for 14 years now with my favored armies being Tyranids, Chaos Marines and now that white Dark Eldar army you keep seeing pop up on BoLS.

With that out of the way, the reason I am writing is to relay my gaming experience with the Dark Kin.  Be it the avid gamer or newer person to our hobby, my hope is that everyone can take some small piece of this article and apply it to their gaming.

I have wanted to play Dark Eldar for a long time now.  Back when this all began for me, Dark Eldar had just been released.  I had a choice between them and something else that peaked my interest, Tyranids.  Nobody in my area played Dark Eldar though, so I ended up with the Nids.  Also, the models for DE back then were hideous!  Now with the arrival of the new 5th Edition Dark Kin, my eyes just lit up with how gorgeous the models were.  I was compelled to rekindle my initial dark yearning for them.  Over 100 games games later, its on to the meat and potatoes.

Speed –  Holy cow this army is fast. I love it.  Coming from Tyranids, the outright speed of this army is overwhelming.  I didn’t know what to do exactly when I first started playing.  Even an all foot DE army is very fast via web way portals.

Fragility –  The army can pack a punch against every other army. With that said though, it hurts to get punched back!  This was something I had to learn the hard way how to deal with.  Dark Eldar vehicles fold like dixie cups and my squads cannot with stand too much of a beating.

I started with my Dark Eldar in November when they were released. I’ve played well over a hundred of games with them versus almost every other combination of army(I love my gaming scene here in Austin).  Also, I have taken them to lots of regional tournaments such as Adepticon, Alamo GT, and Railhead Rumble.  I have done fairly well with them so far but they are going to take some more time to master. Dark Eldar are unforgiving of their Archons making mistakes – just what you would expect!

Speed is Your Ally –  One of our best assets when you get comfortable with it is how fast this army can be.  The speed becomes a very valuable tool for you.  If your opponent knows what your army is capable of, it becomes a weapon for you. It plays mind games with your opponent because they can’t make movement or deployment mistakes or they will pay for it dearly. Usually, in most games, your opponent only has one good round of shooting to cripple you or the Dark Kin are going to get where you want them to be.

Bring the Pain! –  Pain tokens, pain tokens, pain tokens!  The only one that matters is the first one. The rest are just a bonus.  With Feel No Pain, my Wyches no longer fear being blown out of their transports (which WILL happen – deal with it). Also, when you get in a fight, your durability goes way up.  This will cause your opponent to have to deal with your units with more of their forces, effectively limiting their options.

If at first You Don’t Succeed –  This one just pulls at the hobbyist in me. So many ways I could play this one army. I still have not played with every option yet after half a year of high intensity playing!  I have played with so many different variations though that I’ve found out there are not a whole lot of bad units in the codex.  So you can pick the units you like and still have a solid army.

Make them YOUR Glass Cannon

In the end, it all comes down to play style.  Thankfully there are many ways to play this book and that is truly fantastic.  Dark Eldar are a glass cannon with lots of ways to play them and it takes more patience to learn to play them than a lot of other armies out there.  Dark Eldar are not forgiving or easy to play, but they are very rewarding once you get the hang of them. You will hear the sweet cries of your opponents and it will bring pleasure to your dark soul……as it should be!

I’d love to hear your requests of what you want me to cover first, and your own gems of wisdom from High Cormorragh

40k Theory: It's All About the Numbers 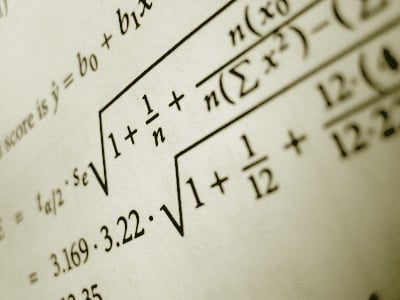